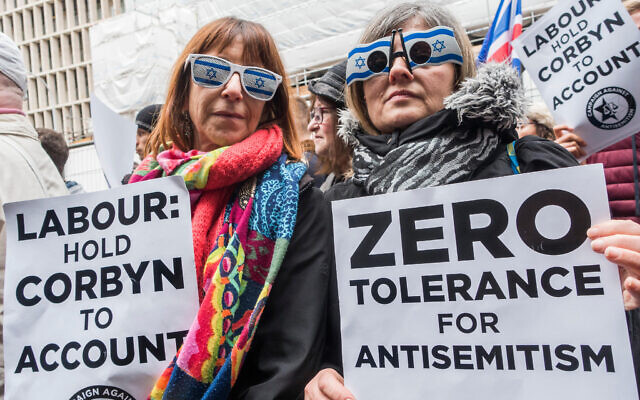 Claims that Jeremy Corbyn could be reinstated as Labour MP as a result of plans by a left-wing group have been dismissed as “utter nonsense” by senior party sources.

A report in The Observer newspaper cited a proposal by the Campaign for Labour Party Democracy (CLPD) calling for power over disciplinary cases to be handed back to members as a mechanism to restore the whip to the former party leader.

It was claimed that leader Sir Keir Starmer could face embarrassment at next month’s annual conference if the motion, which attacked Labour MPs as being “not accountable”, was passed in a vote.

But party sources have told Jewish News that “only Jeremy Corbyn” can bring about his return as a Labour MP.

This would involve him having to make a full and proper apology to the Jewish community for the hurt he has caused over his response to the antisemitism crisis under his leadership of the party.

“The steps Corbyn needed to take to become a Labour MP again were set out in the letter he received from the chief whip when he was suspended,” confirmed a party source.

“The ball has been in his court ever since.

“A motion from the CFLP using Corbyn’s name to try and drum up interest in it, certainly isn’t going to bring about his return as an MP.”

Corbyn was suspended from the party last October after suggesting antisemitism was “dramatically overstated for political reasons” in a response to the damning findings in a report by the Equality and Human Rights Commission.

Corbyn attacked the suspension as a “political intervention” that he would strongly oppose.

He had his party membership reinstated after 19 days but still has not had the party whip restored in the Commons, meaning he sits as an independent MP.

The former leader has said “those who deny there has been an antisemitism problem in the Labour party are wrong”.

Jewish News revealed last month how the CLPD motion was passed by Leeds Central constituency Labour party – and it has subsequently been circulated around CLPs across the country ahead of annual conference.

While senior Labour figures confirm that the CLPD motion is likely to be moved by left-wingers at next month’s conference, they say it is “utter nonsense” to suggest it would gain enough support to pass.

“There are at least 40 other different consitutional changes set to be heard this year’s conference,” said a party insider.

“Someone will inevitably stand up and move the CLPD motion.

“But it won’t pass – there just aren’t the levels of support across the entire party for ideas being put up by supporters of a regime from the past.”

Sources also point out that the proposal to hand power to members – with the conference able to confirm or reject disciplinary decisions that are “of concern to delegates” – would appear to be legally unsound as well.

“This motion appears to defy the rules of natural justice,” added a party source.

Charlotte Nichols, ​​the Labour MP for Warrington North, had also criticised the proposal saying: “The last thing we need is a rule change that could lead to the second guessing of the outcome of bullying and sexual harassment cases or the debate of individual disciplinary cases. This is not how our complaints system should run and should be rejected if it goes to conference floor.”