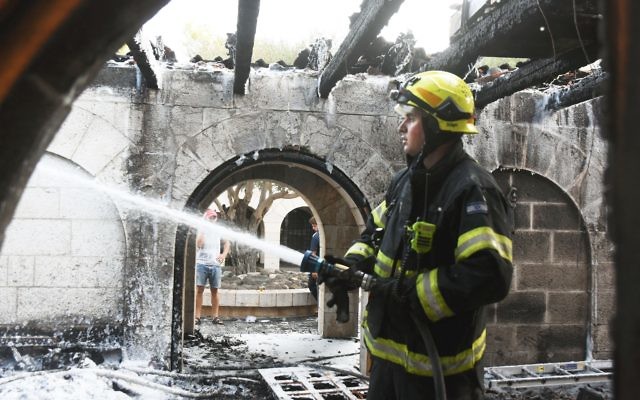 An historic church in northern Israel reopened more than a year after an arson and vandalism attack.

The Church of the Multiplication of the Loaves and Fishes, where Christians believe Jesus miraculously fed thousands of people, reopened Sunday after eight months of repairs and renovations costing about $1 million. The government of Israel reportedly contributed some $400,000 to the rebuilding.

The nationalistic attack allegedly by extremist Jews took place in June 2015. Sixteen youths from the West Bank who were hiking in the area were initially arrested in connection with the attack. Three ultimately were indicted in the attack.

“The last time I was here, we stood together and looked at the burnt walls and the terrible graffiti. Today, I visit here again, and see the renewal of this historic, special, and holy place. I want to thank all the people who worked hard to restore this place, and to say clearly; that hate cannot win,” Rivlin said at the start of the meeting.

“The State of Israel is committed – deeply committed – to the freedom of religion and of worship for all religions and believers. We stand up for religious freedom because, as a people, we know very well what it means to suffer religious persecution. And we stand up for religious freedom because we are a democratic state – who believe in the rights for everyone to worship God according to their belief.”

Along with the fire that struck the church, located on the northwest shore of the Sea of Galilee, graffiti reading “False idols will be smashed” and “pagans” were found on its walls. The site is where Jesus is believed to have fed thousands of people with five loaves of bread and two fish.

Built on the site of a fifth-century church, the church contains restored mosaic floors from the time period. The attack was roundly condemned in Israel and around the world.