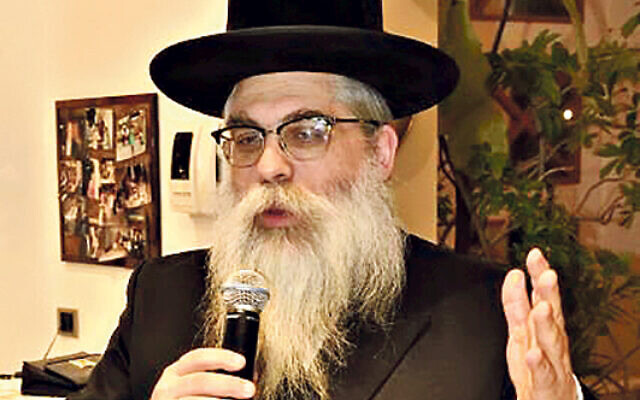 Twenty years ago, Brooklyn-born Yaakov Dov Bleich – the Chief Rabbi of Kyiv and Ukraine – took Pope John Paul II around Babyn Yar, where he prayed. It was a historic visit that took both diplomacy and chutzpah to happen.

“It was interesting because the Pope was not interested in coming to Babyn Yar,” says Bleich. “It took a kid from Brooklyn quite a bit of creativity to get him there.” The difficulties were many, he recalled, not least that Ukraine is an Orthodox country, while the Pope is head of the Catholic Church.

One of European Jewry’s biggest characters, Bleich has lived in Ukraine since 1990 and never knowingly ignored an elephant in a room. During the pontiff’s visit, he famously said: “Give us back our children [who died in the Holocaust].”

Pope John Paul’s visit “definitely made an impact”, he says. Around the world, newspapers carried only photos of him and Bleich – a visibly Orthodox rabbi. Yet for a long time, the massacre was either hushed up, or used as a political football.

“I first went to Babyn Yar in September 1990. About 15,000 people were there. I remember most the politicians, who got up and politicised on the ashes and the bones of the Jewish people. It really upset me.

“You had Ukrainian nationalists saying, ‘Communists were complicit with Nazis,’ then Communists saying ‘We were the ones who beat the fascists, not you.’ That’s not what it’s about. Come to respect the people killed here. It was very disturbing. From then on we decided to have a separate day just for the Jewish community.”

Bleich says there was a half-century of enforced Soviet silence; the editor of a newspaper who published a poem about Babyn Yar was fired.

“The Soviets suppressed the memory for 50 years. The loss of 50 years in history is a tremendous loss. For the past six years, the Babyn Yar Holocaust Memorial Centre has been trying to retrieve and recreate the information we lost. They’ve done a phenomenal job.

“One of the greatest things they were able to do was take a picture taken by a German officer in 1941 and work out the exact spot where Jews were gathered, where their clothing was taken, and where they were shot.”

Bleich has been to the site “hundreds of times” with world leaders, including presidents and prime ministers of Israel, and influential Jewish figures such as Edgar Bronfman, long-time president of the World Jewish Congress, and Holocaust survivor Elie Wiesel, yet he is still learning about it.

“There are many ravines at Babyn Yar. Only this summer, after I took the new two-hour tour with historians, did I finally hear details of what took place where, what did things look like, where were the bodies, how did the PoW [prisoners of war] dig them up the following year [to burn them, trying to destroy evidence].”

What the centre does, says Bleich, is “bring that issue that has been lying dormant for 80 years to the forefront”, and let people see it, study it and have access to it.

“You have the synagogue now, a place for people to pray. You have these art installations, which make people think. You also have audio playing, including the names of people killed there. It’s a place to come, for schoolchildren to come.”

On Ukrainian education, Bleich says the country had “a very difficult” 20th century, so both schools and authorities “chose to ignore” the massacre, adding that there was no monument to Jews at the site until 1991.

Rebuilding and educating is the challenge now, he says. “I foresee in the future a museum and centre at Babyn Yar that will be visited by schoolchildren from around the country.

“Our job is to get them through the door. Our challenge, once they’re inside, is how do we interest them in what really happened in their own land?

“Ultimately, this is Ukrainian history, it’s not just Jewish history. Jews were part of Ukrainian society for 1,000 years and a good part of that society was wiped out.

“It’s the job of the next generation to memorialise that, internalise that, and pass that message on, when there will be no survivors to tell the story.”