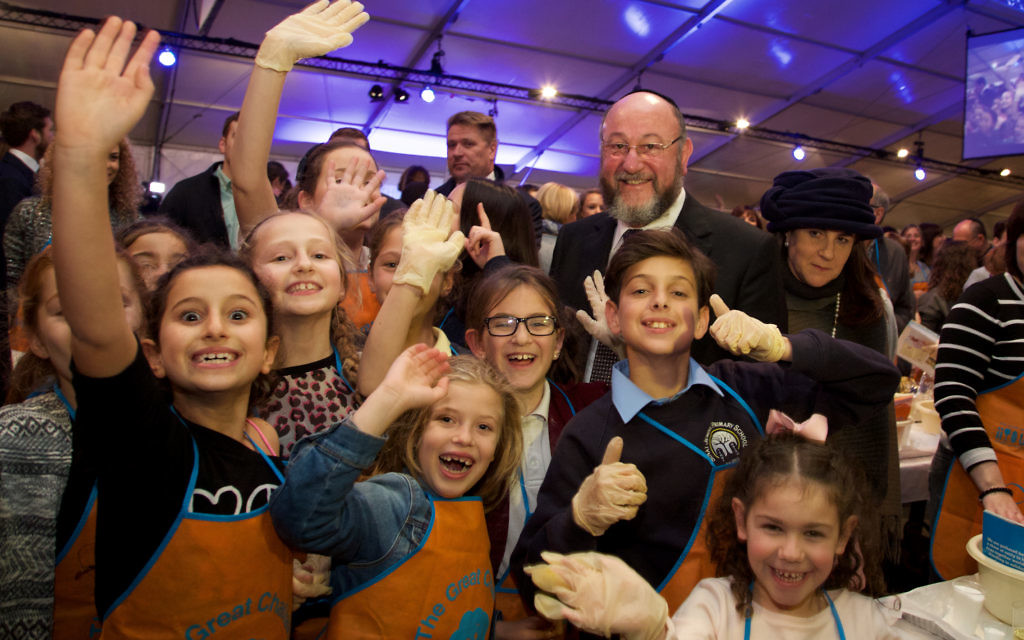 Britain was gripped by Shabbat fever this weekend as more than 100,000 people from Glasgow to Golders Green and Borehamwood to Birmingham came together to celebrate the chief rabbi’s second Shabbat UK.

Around 900 community events kicked off on Thursday night with Great Challah Makes in 30 locations nationwide including in a giant marquee in Brent Cross – where 5,000 people set a Guinness world record for the largest bread-making gathering. Sarah Ganz, the oldest baker at 101, was accompanied by her daughter, granddaughter and great-granddaughter. She described the gathering as “incredible”.

Shuls and schools held special meals, explanatory prayer services and Havdala parties as part of what was billed as “the largest mass participation event ever organised for the Jewish community in the UK”.

Chief Rabbi Ephraim Mirvis – who spent the day in Manchester after having been in London last year – said: “Valerie and I were welcomed so warmly by the many communities we spent time with – it was a remarkable experience we won’t forget. And the reports coming in from around the country are of similarly memorable Shabbat experiences, from the record breaking challah make events to packed communal meals, unprecedented levels of home hospitality and incredibly inspiring Havdallah events.

Those take part in Shabbat UK – which was hailed by David Cameron as “a wonderful initiative” – were encouraged to “switch off the week, switch on Shabbat” by disconnecting from technology in favour of spending quality time with friends and family. Community members joined millions of others in countries worldwide, inspired by the South African Chief Rabbi’s Shabbos Project, in placing a special focus on last Shabbat.

New additions to this year’s event included an end of Shabbat Havdallah party at which by more than 1,000 people enjoyed a concert by Yishai Lapidot and the Musika showband and a Kabbalat Shabbat for 2,000 primary schoolkids the previous day.

Liza Feiner, Assistant Headteacher and Jewish Studies Leader at Etz Chaim Primary School, said: “The atmosphere was amazing and our children had a wonderful time. To quote one of our children: “It was epic! I’ve got Shabbat UK fever now!”

In a powerful show of unity, the Great South London Challah Make at Kingston Synagogue attracted nearly 100 people including from Kingston Liberal, Wimbledon Reform, Croydon Federation and Wimbledon Chabad. The following evening, three-quarters of Kingston United shul members were hosted by twenty one families, including one currently in Netanya.

Bushey shul hosted a Shabbat lunch attended by more than 500 guests of all ages, while celebrations at Barnet Synagogue were boosted by a baby naming, a brit, barmitzvah, batmitzvah and second barmitzvah in one day.

Around the capital, Jewish Care service users enjoyed visits from pupils of King Solomon High school and JCoSS. Members of the charity’s Holocaust Survivors Centre, residents from Ella and ridley Jacobs House and the Sam Beckman Day Centre tucked into an early Shabbat lunch hosted by Rabbi Farhi and students from Chazak.

Jewish Care chief executive Simon Morris said: “To coincide with Shabbat UK we were delighted that so many young people from schools and volunteers from local shuls came to share Shabbat as part of our wider Jewish Care family.”