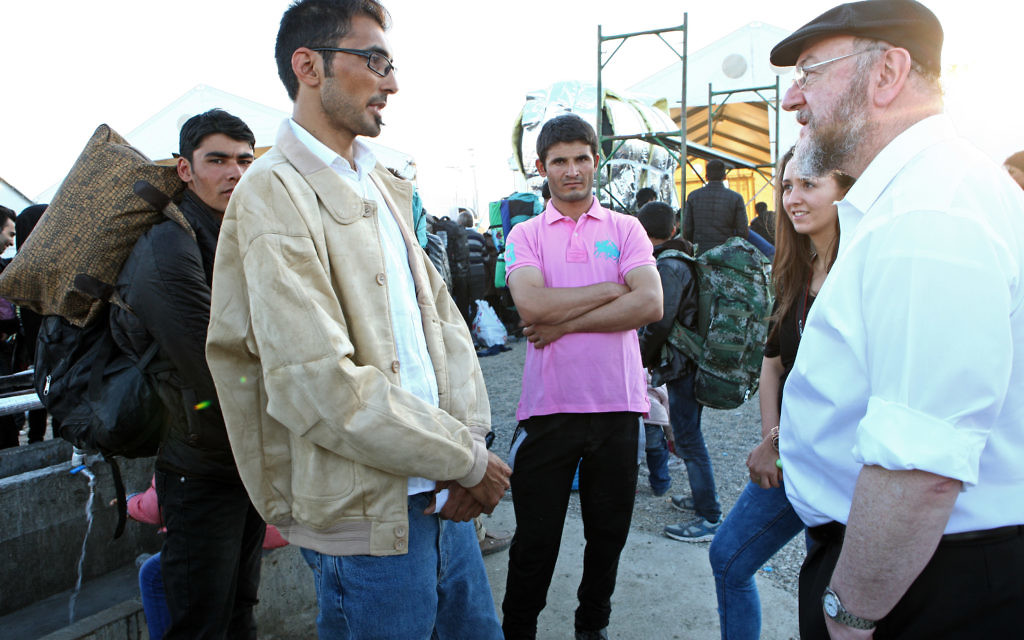 In a groundbreaking visit last week, Chief Rabbi Ephraim Mirvis led a delegation of United Synagogue rabbis to a Greek refugee camp to learn about the human cost of the international refugee crisis.

The visit, under the auspices of World Jewish Relief, (WJR) was to Idomeni, a camp on Greece’s northern border, where up to10,000 migrants pass through every day. Those accompanying the chief rabbi were Dayan Ivan Binstock, minister of St John’s Wood Synagogue, Rabbi David Mason of Muswell Hill Synagogue, Rabbi Boruch Boudilovsky of Elstree and Borehamwood Synagogue, and Rabbi Danny Bergson of Pinner Synagogue.

The British rabbis were able to witness directly the contribution of the Jewish community in the UK to aid the refugees. Shown around Idomeni by WJR’s senior programmes manager, Josh Simons, and its campaigns manager, Richard Verber, the rabbis were shown the food station where refugees receive a meal and water on arrival, thanks to WJR and Praksis, a Greek NGO. They also saw the mobile medical unit which provides doctors around the clock, again thanks to the British Jewish community.

Chief Rabbi Mirvis said: “I am enormously proud of the life-saving contribution made by the British Jewish community through WJR, to alleviate the great suffering of refugees within this complex and vast humanitarian crisis.

“My conversations with the many refugees I met at Idomeni revealed stories of profound human suffering – and of deeply vulnerable men, women and children desperate to rebuild their lives.

“The refugee crisis stands to worsen significantly with the onset of winter. Easing the plight of the hundreds of thousands of people caught up in this immense upheaval is a complicated, ongoing challenge and requires a significant, ongoing response.”

Rabbi Boudilovsky said: “Seeing a three-year-old refugee girl being treated by a doctor, thanks to the support of WJR, made me proud of our community, which has so far contributed over £700,000 to help those in desperate need”.

Rabbi Mason said: “This was an opportunity to meet the real people behind the headlines. We met many Afghanis who were fleeing from the Taliban and ISIS. One man had heard that ISIS were coming to conscript him and so hid underground for two days before escaping towards the border with Iran. Another had not seen his wife and three kids for four years. A man from Syria was with his elderly mother and told me that his brother and father had been killed by ISIS.

“The trip has inspired me to advocate even more for a greater consideration of how we can help the many hundreds of thousands of human beings on the move. The ideal solution will be the resolution of the Syrian conflict but until then we must help these many people in need.”

Rabbi Bergson said: “The journeys these refugees have taken are life-threatening and traumatic. Many were filled with deep uncertainty about where to go. Others had family already in Europe and were filled with a measure of hope as they dreamt of the warm and loving embrace that would welcome them.

He added: “The Jewish community can be really proud of the sterling work being done by WJR. With the awful attacks in Paris there is the real fear that some terrorists may be posing as refugees. But having seen the suffering with my own eyes, I know that come what may, we must find a way to help these people find a secure place to live.”