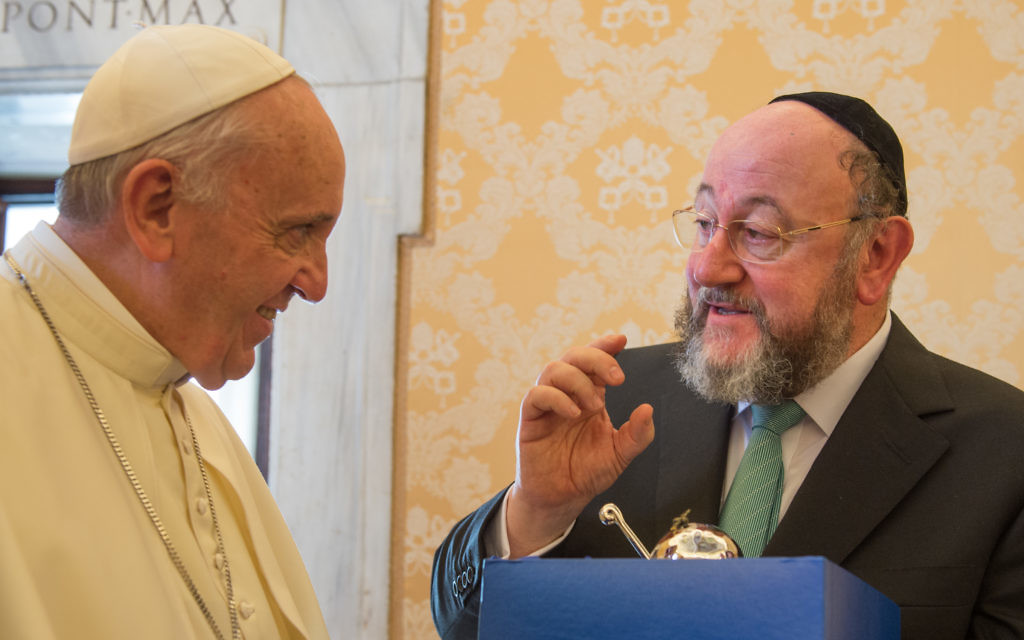 An historic document that heralded a sea change in relations between Catholics and Jews offers a model for improved dialogue with the Muslim community, the chief rabbi has said.

Ephraim Mirvis last week joined the head of the Catholic Church in England and Wales for an historic audience with the Pope to mark the 50th anniversary of nostra aetate – which acknowledged that which is “holy and true” in other faiths and rejected claims that Jews were responsible for killing Jesus.

The chief rabbi said: “I believe nostra aetate can stand as a noble model to other faiths in a state of crisis. Not so long as not many people would have seen that light at the end of the tunnel of Jewish-Christian relations yet it has happened, there is way forward if people genuinely want it to take place.

There is an urgent need for dialogue between different faiths and Islam. We are striving to strengthen our engagement with the Muslim community, dialogue is crucial so we can understand each other and raise issues. Nostra aetate provides a model which can be copied by others.”

During the rare private audience – at which the chief rabbi presented the pontiff with a traditional apple and honey dish – the pair and Vincent Nichols discussed the refugee crisis, the “aggressive secularisation” of the world and Middle East peace.

The Pope meeting Chief Rabbi Ephraim Mirvis, and his wife. The Chief Rabbi is handing the Pope his gift. (Image credited to Mazur/catholicnews.org.uk)

Rev Nichols said afterwards it was “quite clear” a chief rabbi and Archbishop of Westminster would not have undertaken a joint visit half a century ago. The trip enabled them to see the “practical unfolding” of the nostra aetate including at the Pontifical Gregorian University where church leaders of the future are taught Jewish theology by Jewish scholars.

While stressing how far relations had come, both the chief rabbi and Cardinal Nichols believed there was plenty of room for further progress. The former said: “My sense is that we’re still very much at a beginning. I think nostra aetate opened up a pathway, it’s not necessarily an easy pathway because of memory and experience.

The Chief Rabbi walking with his wife and the Archbishop of Westminster
(Image credited to Mazur/catholicnews.org.uk)

One of the interesting themes of our discussions was the peace at which human generations come to terms with painful pasts – and that’s not something that can be rushed. We both I think have a sense the impact and the continual burden of anger and anguish at the Holocaust takes generations to explore.”

Mirvis said he was “impatient” for further progress, adding that he wouldn’t want leaders of the faiths in 2065 questioning what had been achieved over the previous 50 years.

He hailed Pope as a “remarkable” faith leader, adding: “We saw ourselves as partners in an effort to preserve tradition in an untraditional world.”