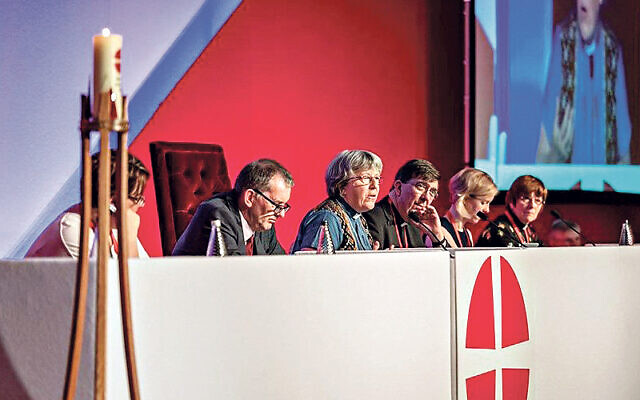 Chief Rabbi Ephraim Mirvis has criticised the Methodist Church’s decision to endorse a series of anti-Israel motions at its annual conference as “deeply misguided and deplorable.”

Jewish News revealed last month how the Methodists were set to endorse a document titled “Cry for Hope” at the conference last week.

This included claims Israel was now an “apartheid state” and an endorsement of Boycott, Divestment and Sanctions against Israeli companies deemed to be profiting from “occupation.

On July 1st the Methodist conference adopted four motions on the topic of Israel and Palestine – including the claim the Jewish state was responsible  for the “deteriorating situation” for Christians in Gaza and the West Bank.

A call to end all support for the British government’s military contracts with Israel was also suppoprted.

The Chief Rabbi tweeted his disapproval of the development writing: “That the Methodist Church are prepared to endorse ‘Cry for Hope’, a document that wilfully distorts the meaning of Zionism and seeks to legitimise the insidious BDS movement, is deeply misguided and deplorable.

“This does not bring peace between Israel and the Palestinians any closer.

That the Methodist Church @MethodistGB are prepared to endorse ‘Cry for Hope’, a document that wilfully distorts the meaning of Zionism and seeks to legitimise the insidious BDS movement, is deeply misguided and deplorable. 1/2https://t.co/7o3j1WGTnK

“Rather, it only serves to diminish Christian-Jewish relations in this country, and damages the very cause their Church purports to champion.”

On its official website, the Methodist Church confirmed it had received more resolutions on Israel and Palestine “than there has been on any other international conflict. ”

It added:”This has led to the suggestion that the Methodist Church in Britain does not treat Israel by the standards applied to other nations.”

But defending itself from such criticism it claimed: “Methodist people are passionate about countering injustice in the UK and worldwide.

“Our members benefit from the accounts of our global relationship partners in this respect.

“A number of resolutions at the 2021 Methodist Conference had an international justice theme.

“We consider fundamental human rights to be universal, although their realisation may look different in various contexts.

Defending the decision to adopt the use of the term apartheid in relation to Israel, the Church said:”Cry of Hope argues that it is time for the international community to recognise Israel as an apartheid State in terms of international law.

“Apartheid has a precise definition under international law and not all situations of apartheid with be identical to that of apartheid South Africa. On this question Methodist Conference has not taken a view.

“The reply did note that the unilateral de facto annexation of a large part of the West Bank presents a very different situation to that which has guided the Methodist Conference in the past.”

The website stressed that the conference position in favour of BDS was not a new one.

It added:”The Methodist Conference highlighted the increase in antisemitism in the UK in recent years…. (and)  has made clear its abhorrence of antisemitism on many occasions over 75 years.”