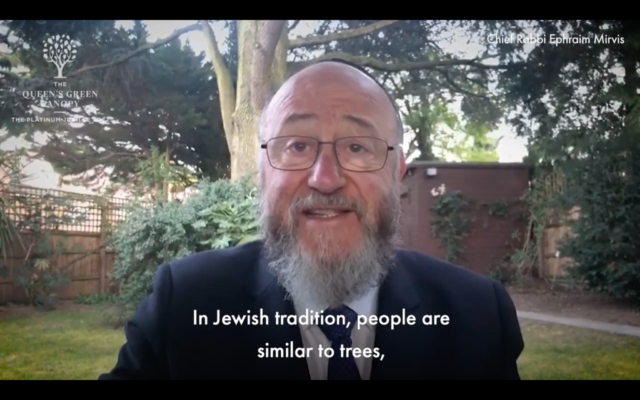 Faith leaders including Chief Rabbi Ephraim Mirvis have spoken out in support of a project to encourage communities, schools and gardeners to plant trees to mark the Queen’s platinum jubilee.

Mirvis has been joined by The Archbishop of Canterbury, Justin Welby and senior clerics from Islam, Hinduism and other religions urging their communities to honour the head of state’s lifetime of service by planting a tree.

In a video message where the leaders each speak a line, Mirvis said: “In Jewish tradition, people are similar to trees, like them we can bless and protect our environment.”

While Imam Qari Muhammad Asim, chair of Mosques and Imams National Advisory Board, said: “Prophet Mohammed spent his life caring for the creatures of God and urged humanity to plant trees to protect the environment.”

The Queen’s Green Canopy scheme has been launched to encourage people to plant trees from the start of the tree-planting season in October 2021 through to the end of 2022, to mark the Queen’s 70-year reign which will be celebrated next year.

The scheme will also highlight 70 irreplaceable ancient woodlands across the UK and identify 70 ancient trees, and create a pilot training programme for unemployed young people to plant and manage trees.

Veteran broadcaster Sir David Attenborough, who featured in the ITV documentary The Queen’s Green Planet, talking to the Queen about the trees planted in Buckingham Palace’s garden, is not officially involved in the project but is a supporter.

We're so excited to launch The Queen’s Green Canopy, a UK-wide #tree planting initiative to mark Her Majesty’s Platinum Jubilee in 2022 ????

Her Majesty joined The Prince of Wales for the first #Jubilee tree planting at Windsor Castle earlier this year ????#queensgreencanopy pic.twitter.com/Ddb56HaTco

Schools and community groups will be able to apply for three million free saplings from the Woodland Trust as part of the project.

The Prince of Wales was joined by the Queen for the first jubilee tree-planting in the grounds of Windsor earlier this year, during the tree-planting season.

In a video message to launch the initiative, Charles urged people to join him to “plant a tree for the jubilee – in other words a ‘tree-bilee’.”

He said: “It is absolutely vital that more of the right species of trees are planted, in the right places, and that more woodlands, avenues, hedgerows and hedgerow trees and urban planting schemes are established, whilst ensuring that we also protect and sustain what we already have.

“Whether you are an individual hoping to plant a single sapling in your garden, a school or community group planting a tree, a council, charity or business intending to plant a whole avenue of trees or a farmer looking to create new hedgerows, everyone across the country can get involved.”

The scheme is being launched as part of the Royal Horticultural Society’s “virtual” Chelsea Flower Show, taking part online this week.

People are being encouraged to use the summer to plan their jubilee projects and be ready for the start of the planting season in October, when they will be able to upload details and images on an interactive Queen’s Green Canopy map.

Taking part in the scheme, which is being hosted by climate charity Cool Earth, could range from individuals planting trees in their own garden to the creation of platinum jubilee copses on council land or avenues in cities or housing developments.

The pilot training programme for unemployed young people aged between 16 and 24 will be run through Capel Manor College, London’s only specialist environmental college, of which the Queen Mother was patron.

Donations to the scheme will go to deprived areas and urban schools through one of the partner organisations of the Queen’s Green Canopy, Trees for Cities.