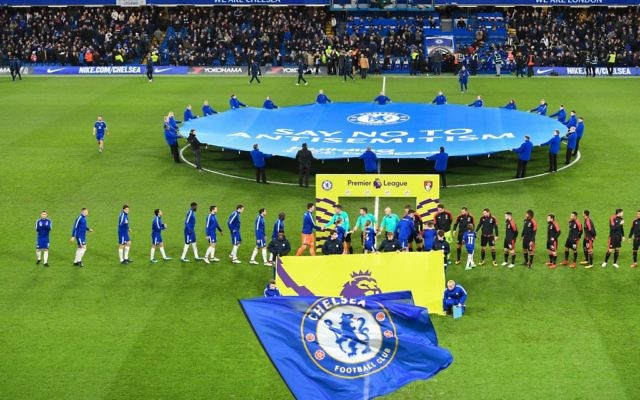 Chelsea launched its campaign to tackle antisemitism in January 2018

Chelsea Football Club has pledged to conduct a “full investigation” into undercover video footage recorded for a BBC documentary, which shows its fans making Nazi salutes, mimicking the sound of gas and singing antisemitic songs.

The London club said it would take action “as soon as we have been able to view the video”, after it is broadcast on 12 February.

A club statement said: “It is unclear to us at this point if Chelsea supporters are involved. However, should any individuals displaying discriminatory behaviour in the video be identified as season ticket holders or members of this club, we will take, and support, the strongest possible action against them, in line with our zero tolerance approach to all forms of discrimination. Such behaviour does not in any way reflect the values of this club”

Stressing that “no club has done more” to fight Jew-hatred, following the launch of the “Say No To Antisemitism” campaign in January 2018, the statement says the club will “endeavour to educate” fans, and that “in appropriate circumstances” will “take the strongest action against offenders and issue bans”.

During the clip, fans’ Heil Hitler salutes were caught on camera in October last year, as the London club played in France. Some were filmed singing antisemitic songs about their rivals Tottenham Hotspurs, a club with Jewish heritage.

The footage will be broadcast on Wednesday night on BBC Three, in a documentary called ‘Shame in the Game’. It includes fans’ racist taunting of black players, some of whom later quit the game. Others have needed counselling.

In another clip, one fan can be seen leading a song about former Spurs striker Martin Chivers while riding a train. The lyrics are: “Chivers was a Jew. The thing between his eyes was twice the normal size. Yiddo Yiddo Yiddo.”

The club, which is owned by Jewish billionaire Roman Abramovich, acknowledges antisemitism within its support base, and the Chelsea hierarchy has gone to great lengths to use the players to help educate fans on hate crime.

Two years ago it launched the ‘So No to Antisemitism’ campaign, and as recently as last month, the club unveiled a commemorative mural at its stadium of Jewish footballers and British prisoners of war who were sent to Nazi camps.

However, the new undercover footage will make uncomfortable viewing for the club’s management, highlighting how the problem persists.