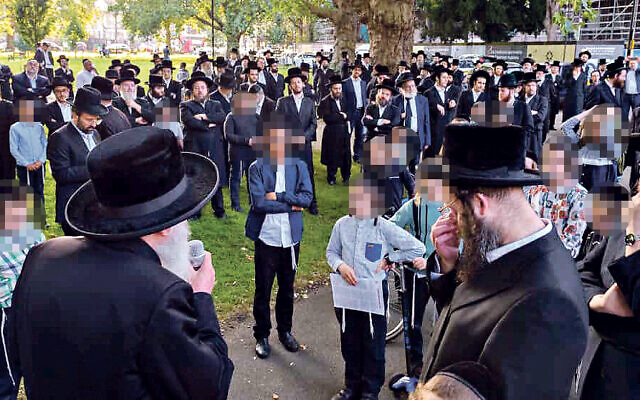 Hundreds of members of the Charedi community in Stamford Hill gathered on Sunday over concerns about a lack of school places for children.

An estimated 400 people attended the meeting at Clapton Common, with community figures leading a prayer for school places.

One of the organisers of the gathering, Moshe Margolis, said it was aimed at highlighting that a small group of children had not found a suitable school place.

“There is a situation where many different schools with different criteria, there’s always going to be some falling through the gaps,” he said. “We’re talking boys, girls, schools from all ages, and for each of the families it’s quite painful.

“While I can’t blame anyone in particular, we need to make sure not even one child stays behind.

“So in order to create public awareness, we should gather. It’s not a demo, it’s not a protest, it wasn’t against the schools, it was an open discussion to say ‘Let’s do something about it.’”

He estimated that about 30 children were affected, and for a variety of reasons, which could include schools being oversubscribed or a school place not being suitable for a particular child.

“But in our community, we don’t want even a small percentage of children being left behind,” he said.

The gathering was held at Clapton Common because it was a “neutral” space to raise public awareness. “It created public awareness and people will be speaking about it over Shabbat and Rosh Hashanah,” he said on Monday. “Sometimes it gets tough, because the single voice of the child can get lost. So what we created was a moment when those children could be heard.”