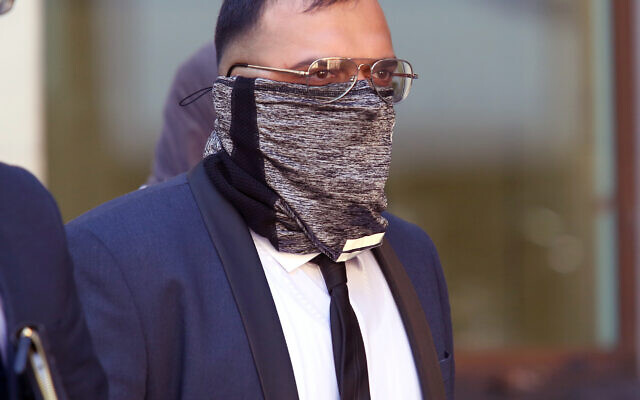 Picture shows Adil Mota at Westminster Magistartes Court. Mr Mota is charged with using threatening behaviour or insulting words towards the Jewish Centre on 16th May.

Four men charged with yelling antisemitic abuse from a car in a ‘Convoy for Palestine’ have had their case adjourned until 23 November.

Mohammed Iftikhar Hanif, 27, Jawaad Hussain, 24, Asif Ali, 25 and Adil Mota, 26, all from Blackburn, Lancs, were all said to be part of a convoy travelling through St John’s Wood earlier this year, accused of engaging in racist abuse.

They had been due to appear for a plea and trial preparation hearing at Wood Green Crown Court this week, but it had been adjourned until later this month.

The four are all charged with using threatening, abusive or insulting words, or behaviour, with intent, likely to stir up racial hatred on 16 May.

In October, they appeared at Westminster Magistrates’ Court  and spoke only to confirm their names and addresses.

Their lawyers indicated they would all be denying the charges.

The abuse followed simmering tensions due to the political situation in Israel and the Palestinian territories.  Thousands of people had been marching through Central London in support of the Palestinians, amid ongoing fighting between Israel and militants in Gaza.

Hanif and Ali, both of Pringle Street, Hussain, of Revidge Road and Mota, of Leamington Road Blackburn, are charged with using threatening, abusive or insulting words, or behaviour, with intent, likely to stir up racial hatred.

District judge Nicholas Rimmer bailed them all unconditionally ahead of a plea and trial preparation hearing at Wood Green Crown Court, which will now take place 23 November.