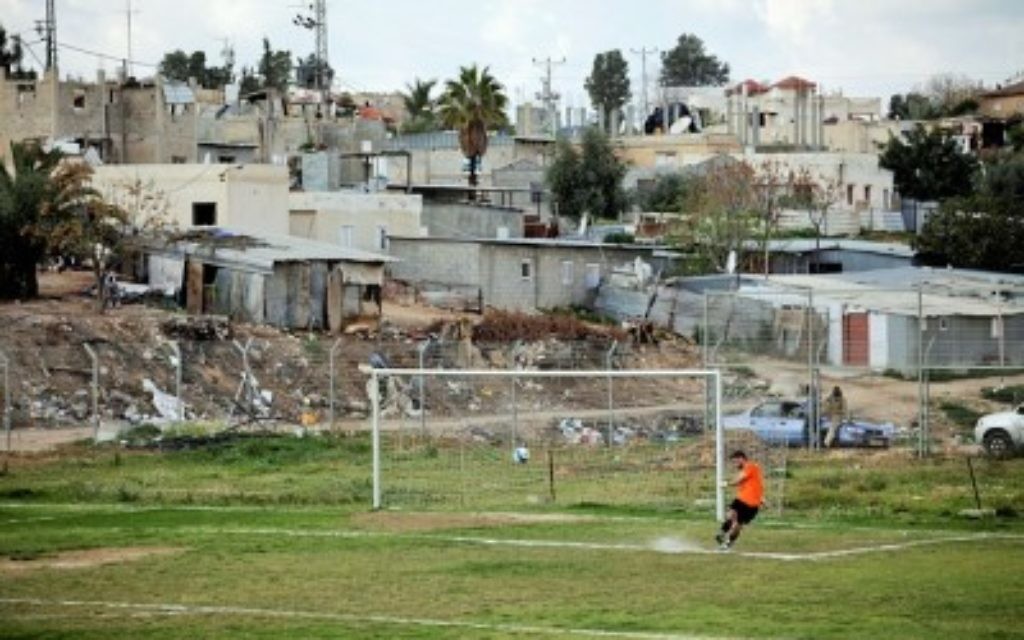 An image from the photography exhibition on Jewish-Arab co-existence.

An image from the photography exhibition on Jewish-Arab co-existence.

A photographic exhibition highlighting the contribution of football to Jewish-Arab co-existence in Israel has been taken down by Cardiff’s Central Library – less than 24 hours after it opened.

Sponsored by the Israeli Embassy, it shows diversity and coexistence through football, in dusty towns and villages throughout the country. It’s a theme that continues on the pitch with Arabs, Muslims and Bedouin play in the Israeli football team.

It’s understood the exhibition was scrapped following pressure from anti-Israel protesters who plan to stage a demonstration ahead of the Israel’s Euro 2016 qualifier against Wales in Cardiff on Sunday.

A Cardiff council spokesperson told Jewish News: “Following a complaint it was decided to review the material and the exhibit was withdrawn. The Council is aware there are protests planned around the Wales Israel game at the weekend and this was taken into consideration.

“There was potential for a large demonstration outside the Central Library Hub in relation to the exhibition, which could disrupt access to the building and the services we offer. For this reason a decision was made by officers to remove the exhibition for operational reasons.”

“Our libraries are buildings which promote free speech, but it was felt that running this exhibition could lead visitors to suppose that the Council was displaying bias. This is of course not the case.”

The exhibition was previously displayed, with no incident, at a cultural centre in Derby, and most recently at the entrance hall to The Guardian in London.

Eitan Na’eh, Charge d’affaires of the Israeli embassy in London, branded those who forced the exhibition’s closure “thugs”. He said: “Tolerance towards intolerance is cowardice, and this is the unfortunate sight we witnessed in Cardiff, in the face of vile threats by a small group of thugs.

“Cardiff hosting a football game between the Israel and Wales national teams. Football is the one sport that can bring peoples and nations from around the world together. This photography exhibition aims to promote coexistence between Jews and Arabs in Israel, as they live and play football together.”

“It’s these pictures of coexistence that intolerant thugs wish to erase, so that no one might realise that there is one country in the Middle East where such coexistence exists. Britain has long been the home of a people who have shown the world the meaning of determination and bravery; In Wales this week we witnessed a surrender to the forces of extremism.”

Welsh MP Guto Bebb described the decision as “despicable”. He told Jewish News: “This shames our capital city.  Those who target Israel simply cannot abide the fact that most Palestinians and Israelis want to live in peace.  This attack on freedom of expression is censoring the truth in order to allow the narrow hate-filled agenda of the small number of anti Israel to remain unchallenged.”

An Israel embassy spokesperson added: “This is a boycott against peace and coexistence, in line with the destructive and belligerent aims of the movement to delegitimise Israel. Removing an exhibition showing how football promotes friendship between people of different backgrounds in Israel, turns a celebration of coexistence into an ugly politics of division.”

A statement from Stop the War Coalition, issued prior to the exhibition being closed, said: “Israel uses sport as a way to present itself as a ‘normal’ European state, to whitewash its racism against the Palestinians, just as South Africa did under apartheid.”