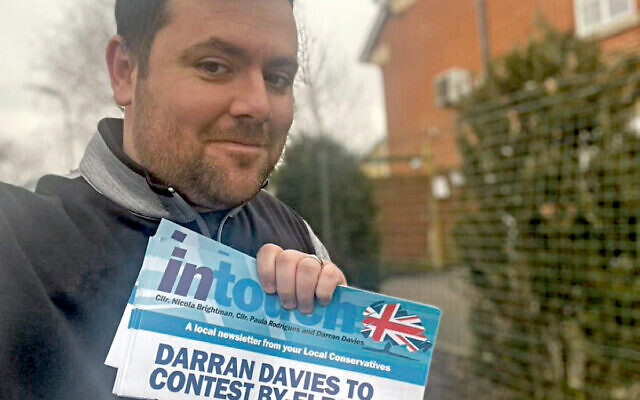 Darran Davies is contesting a by-election in Hillingdon

A Conservative by-election candidate who was revealed to have shared a social media post in which he used the slur “Jew-Boy” has triumphed in a by-election in Hillingdon, west London.

As the result of the Charville ward by-election was declared on Friday it emerged that Darran Davies, the Tory candidate received 2,098 votes, while his nearest rival, Labour candidate Steve Garelick, got 1,799 votes.

Jewish News revealed last month how Davies had shared a post on Facebook which featured an image of a male associate along with the words: “Wanted Jew Boy Reward $100.” ​

The Tory Party confirmed they had launched an investigation into the matter as Davies expressed “deep regret” for his actions and lack of judgement ahead of the May 6 by-election.

Davies directed the post towards a friend Richard Stevens, who had not been seen in the local pub for sometime.

Stevens’ Facebook page is littered with extreme postings against Muslims, including a threat to commit actual violence against people of Somalian heritage. In one post, Stevens wrote: “Why don’t you f*** off… That’s wot was said to me tonight when I said Muslims are racist.”

Hillingdon Council’s Conservative group leader said last month : “The posting … relates to the use of an inappropriate nickname among friends. Although the comment was inappropriate and below the standards expected of a Conservative member this has been resolved by admonishing Mr Davies and reinforcing with him the standards expected of persons seeking to represent Hillingdon Conservatives. Mr Davies has shown deep regret for his lack of judgment and has apologised.”

On Friday Davies was congratulated over his by-election victory on social media by local Conservative councillors.

The election took place following the death of a local Conservative councillor.

It came amid signs of huge successes for the Tories in the elections taking place in England.

In Hartlepool, in the north-east, the Conservatives thrashed Labour in a parliamentary by-election, winning a near 7000 majority.

It was the first time the seat had been represented by a Tory candidate since the constituency was created in 1974 and the result put huge pressure on Labour leader Keir Starmer.

Jewish News will be reporting on results affecting the community in the by-elections, London Assembly, Mayoral and other regional elections that took place across the country, and in Scotland and Wales.