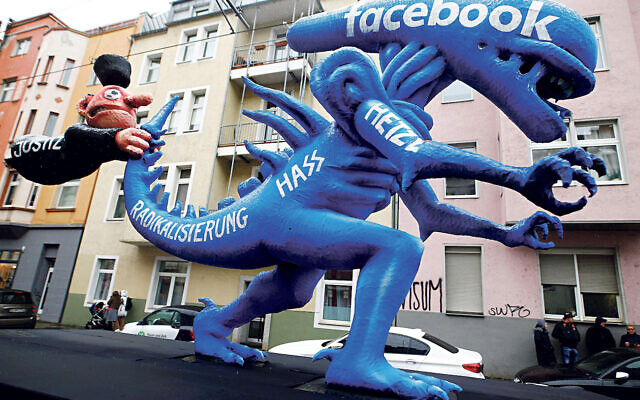 A figure depicting hate speech on Facebook during a protest

Facebook deletes only a tiny fraction of Arabic hate speech posted on its platforms because its systems are heavily skewed towards monitoring English language content, campaigners have warned.

Jonathan Greenblatt of the US-based Anti-Defamation League said the social media giant’s AI or artificial intelligence filter – which is designed to automatically remove content that is offensive or illegal – was deeply deficient in most regions where English is not the main language.

“It’s quite astonishing to consider that something like 87 percent of their AI is focused on English-language hate content,” Greenblatt said, “despite the fact that English language users – certainly American users – are somewhere in the ballpark of 10 percent of their user base.

Such low levels of detection are significant, he said, because of organisations such as Hezbollah, Hamas and Islamic Jihad, which use social media extensively to organise their activities.

He was speaking on this week’s episode of the Jewish News Podcast, which considers the spread of anti-Jewish hate online and the failure of social media platforms, including Facebook, to eliminate it.

Greenblatt suggested that if organisations such as Facebook were not capable of policing their own content in other languages, they should not be operating in those regions.

“If Facebook doesn’t have the technical capabilities to be detecting the stuff that presents a clear and present danger to the Jewish community and other communities in these places, why are they allowed to operate there?

“You wouldn’t allow a car manufacturer in England if they didn’t reorient the steering capability to the side of car.”

This week’s edition of the Jewish News podcast also features input from the Imran Ahmed from the Centre for Countering Digital Hate and the Board of Deputies’ Daniel Sugarman.  u  Listen at jewishnews.co.uk