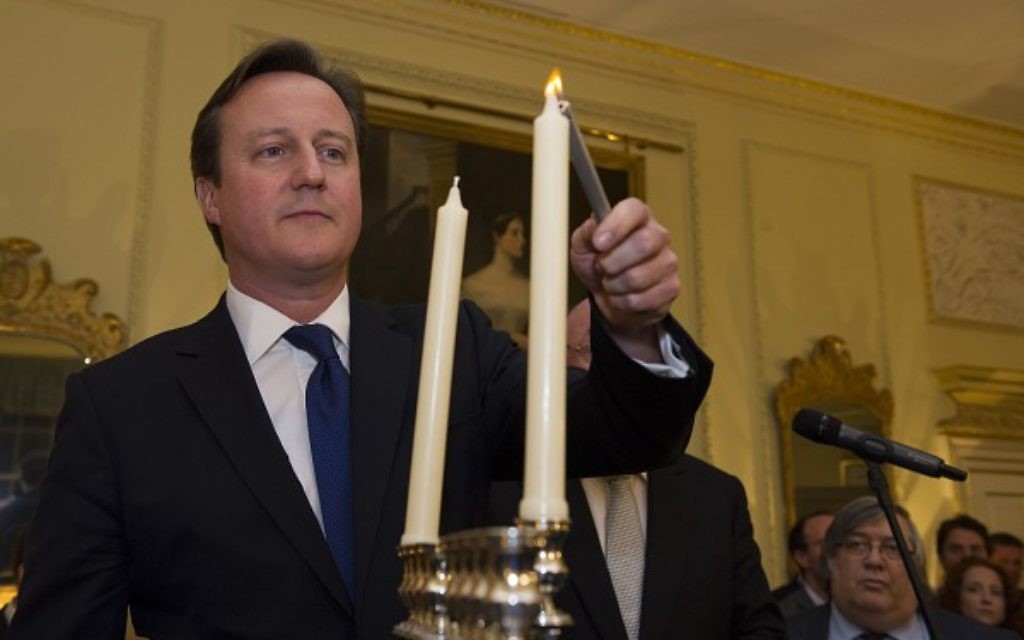 After lighting the candles with the Chief Rabbi, Cameron addressed the issue of Iran head-on, saying: “An enemy of Israel’s is an enemy of mine… but in my judgement this is the right step to take.”

In the presence of the Chancellor of the Exchequer George Osborne and former Israeli prime minister Ehud Barak, Cameron was at pains to point out the deal’s advantages.

“All I will say to you tonight is that I share your scepticism, I share your worry. I don’t have any starry-eyed view about what this Iranian regime offers. We only got to where we are because of the very tough sanctions.”

The PM’s comments came as Iranian President Hassan Rouhani this week insisted his country’s right to enrich uranium had been recognised and goaded Israel by asking: “Who’s isolated now?”

Speaking after Sunday’s momentous interim deal between six world powers and Iran, the new leader said: “Enrichment is our nuclear right. It continues today and it will continue tomorrow. It will never stop. This is our red line.”

Asked about the battle with arch-enemy Israel, Rouhani said: “Many were trying to isolate Iran, but who is isolated today? Our enemies are isolated.”

His remarks follow the marathon nuclear negotiations in Geneva, where the UK, France, China, Russia and Germany agreed a six-month deal that halts Iranian nuclear activity in return for limited sanctions relief.

It emerged this week that US Secretary of State John Kerry opened a secret backchannel with Iran back in 2011, enlisted the help of the Sultan of Oman.

On the repercussions of Sunday’s deal, which was being dubbed “an historic agreement,” Kerry said that Israel would be safer as a result.

“From this day – for the next six months – Israel is safer than it was yesterday,” Kerry said. “We now have a mechanism by which we are going to expand the amount of time in which they can break out (toward making a nuclear bomb). We are going to have insights to their programme that we didn’t have before.”

“This is not a historic agreement, it is a historic mistake,” Netanyahu said, adding that world powers had “given up” sanctions in exchange for “cosmetic Iranian concessions that can be cancelled within weeks”.

Although Kerry insisted that there was “no daylight” between the US and Israel, he may find it hard to deliver on Netanyahu’s demands. The Israeli PM insists on the full dismantling of Iran’s nuclear programme, but Iran consistently asserts its right to enrich uranium for peaceful purposes under the Non-Proliferation Treaty (NPT).

Yet despite the public tension between the two allies, there were signs this week that Israel was increasingly being brought into the process.

Hague had earlier maintained: “This agreement is good for the world, including the countries of the Middle East.”

“I know that Israeli leaders have serious concerns,” he said. “They would have preferred a final deal that met all of our concerns at once. But in order to arrive at a comprehensive agreement, an interim agreement that imposes immediate restraints on Iran’s programme is an essential requirement.”

In both Britain and America, however, politicians voiced concern. In the States, Senator Chuck Schumer said he would get together with colleagues in December and push for additional sanctions, and in the UK, chairman of the Commons Foreign Affairs Select Committee Richard Ottaway said he understood why both Israel and Saudi Arabia had criticised the deal, adding that the UK had a “duty of care” to both allies.

He added: “It must not be forgotten that Iran is the world’s leading state-sponsor of terrorism and possesses an appalling record of human rights abuses against its own citizens.’

His concerns were echoed by community organisations.

Vice-President at the Board of Deputies, Alex Brummer, said: “The deal was premature. They should have given sanctions more time to bite. We really needed a comprehensive agreement. To my mind, this was borne more out of political expediency in Washington rather than Israel’s best interests.”

BICOM chief executive Dermot Kehoe pointed out “not a single Iranian centrifuge will stop spinning” as a result of the deal, but he urged a focus on the future.  “Israel and her friends in the UK must now work towards the best outcome in six months time whilst preparing for the worst,” he said.