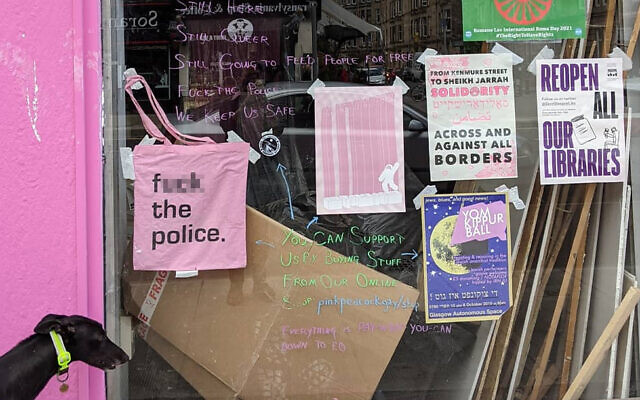 A director of a “queer, yiddish” cafe in Glasgow is facing a criminal charge after a tote bag was displayed reading “F**k the police” in the window.

One of the directors, Morgan Holleb, 32, has since been charged by officers with alleged breach of the peace.

Two police officers seized the bag on Tuesday, as Joe Isaac, another director of The Pink Peacock, filmed the incident.

A spokesperson for Police Scotland said the charge came after “complaints from the public regarding an item displaying offensive language,” without confirming the item.

“We can confirm that a 32-year-old man has been charged in connection with a breach of the peace and the item has been removed from the premises,” said the force.

Holleb told Jewish News he thought the charge was an intimidation tactic – and said that video of police removing the tote bag had actually led to a surge in orders.

“We’re not surprised we’re getting this reaction from the police. It’s just unacceptable, it’s a clear abuse of police powers,” he said.

“This isn’t about us and tote bags, it’s about the role of policing in our community. They’re wasting time and taxpayer money to put a tote bag in an evidence bag.”

In the video filmed by Isaac, Holleb is seen replacing the English-language tote bag with another in Yiddish. It reads “daloy polizei,” which means “down with the police.”

“We’ve sold out the tote bags, and we’d only just restocked them. We’ve got 100 tote bags back-ordered because we’ve run out,” he said.

Asked for his response to those who would say the language is insulting to officers, he added: “The short answer is the abuse that our communities face from the police, the brutality and harassment, that should be more offensive to people than ‘F**k the police.’”