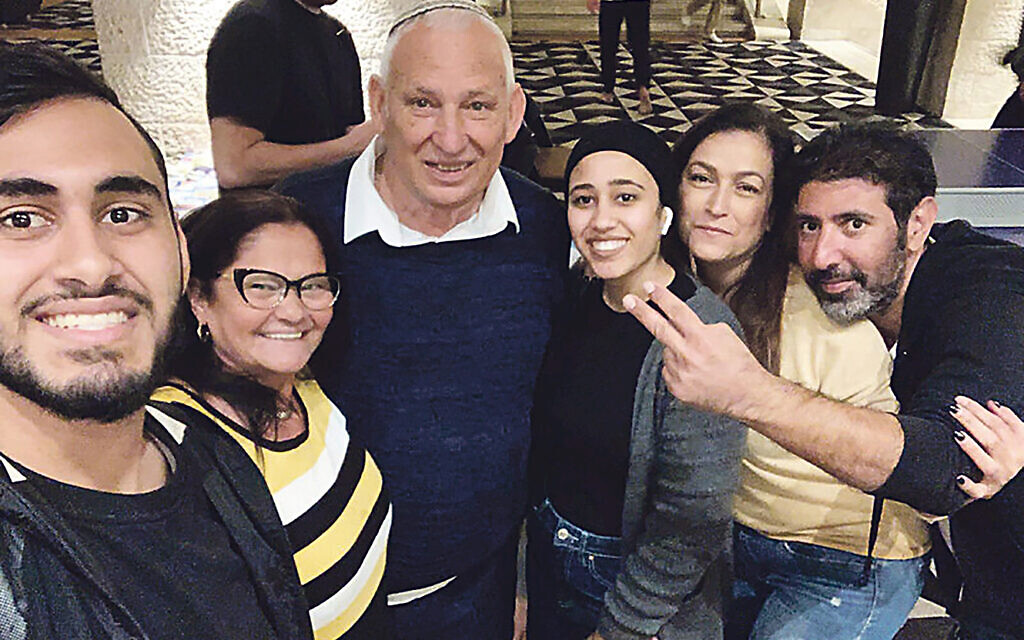 Gina and Amram Maman, second and third from left, with Aysha Abu Shhab, fourth from left, along with other recuperating guests at the Dan Jerusalem hotel

When Israel went into lockdown back in March 2020, returning residents and many key workers had to quarantine. Israeli Jews and Palestinian Arab citizens of Israel were packed intohotels together.

From mid-March until early May, the Dan Jerusalem hosted about 180 guests. Among them were 19-year-old Aysha Abu Shhab and her 21-year-old brother, Mohammed. Both were employed as janitors at an Israeli hospital, where they had been infected by the virus.

As the hotel began filling with more people, Aysha, who is Muslim, noticed that during dinner everyone was sticking with those from their own background, so she decided to do things differently.

She went over to join a Jewish couple. Aysha, who wears a hijab, sat down with Gina and Amram Maman, who wears a kippah. By the end of the meal, they were all laughing and singing Inta Omri (You Are My Life), a popular Egyptian song from the 1960s.

As the days went by, the Arab and Jewish guests began intermingling more. In April, the hotel opened the banqueting hall for guests to host their own Passover seder. Secular, Orthodox, Muslims and Christians all celebrated together.

A story like this is music to the ears of Jenny Nemko. The former BBC journalist, former chairwoman and current trustee of Neve Shalom Wahat al-Salam (NSWAS) – the unique village in Israel where Arabs and Jews live together in a shared society – last year established TalkMatters, a UK-based body representing organisations that encourage Jews and Arabs in Israel and the Palestinian territories to meet and talk. The recent conflict and reaction to it demonstrates how much work needs to be done. 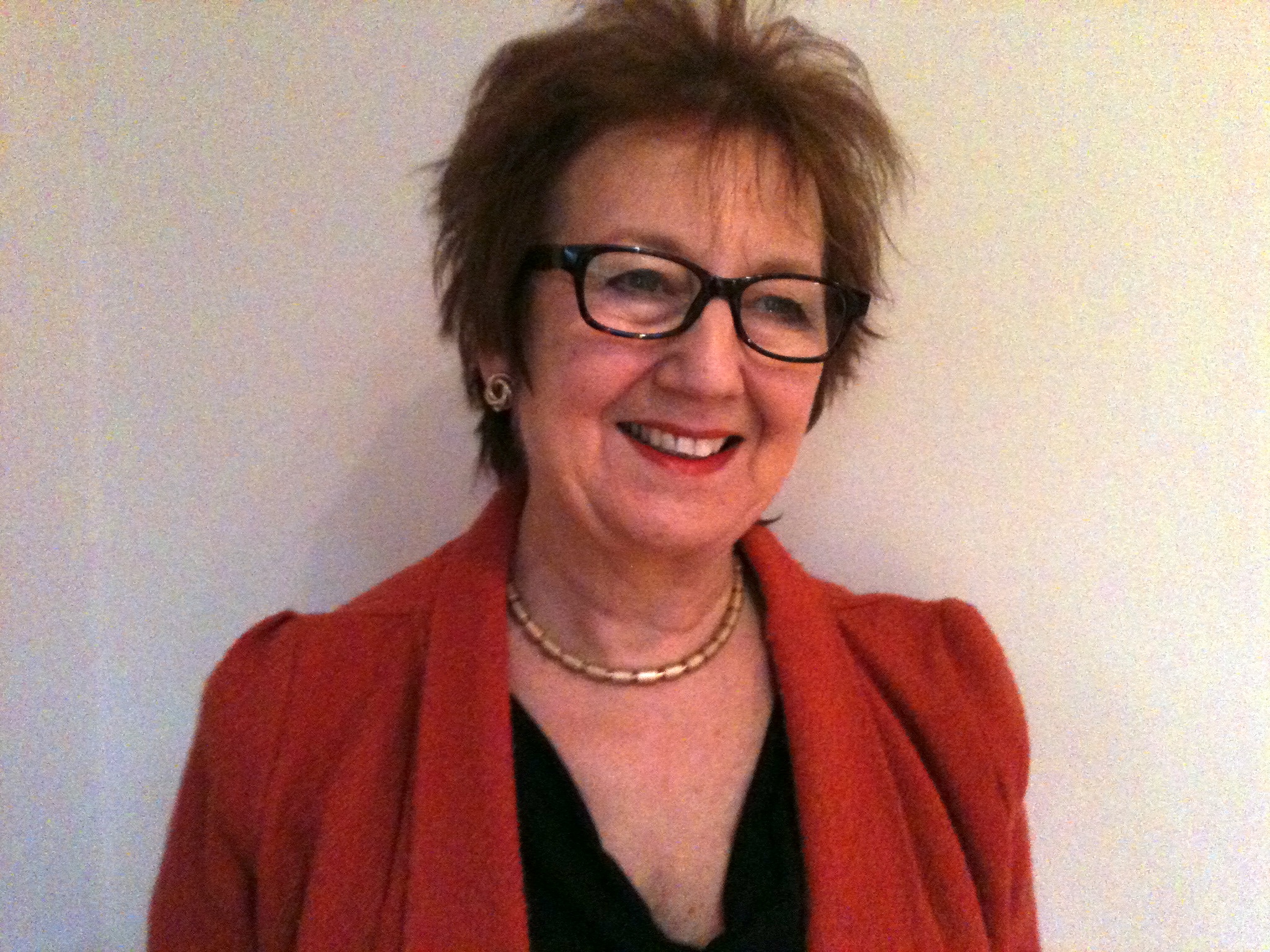 Nemko first became involved in projects that bring together -Palestinian and Israeli Jewish people when looking for ‘good news’ stories in the Middle East for BBC radio.

She says: “Having spent many years involved with the educational institutions at NSWAS, I’ve become increasingly mindful that many UK Jews, Christians and Muslims know little about the positive co-operative projects in Israel and the Palestinian territories. From a Jewish diaspora perspective, I wanted to do something about this.”

TalkMatters raises awareness of the many and varied grassroots projects that encourage Jewish and Arab-Palestinian citizens of Israel, as well as Palestinian residents in the Palestinian territories, to talk.

“These projects, whether they focus on music, ecology, education, sport or religion, are vital not only for the future of Israel and Palestine, but also for Christian-Muslim-Jewish relations here in the UK, where there is so much ignorance and confusion surrounding Israel, Palestine, Zionism and antisemitism,” explains Nemko.

The Interfaith Encounter Association has hundreds of groups running projects all over Israel and in the West Bank. Some of these have held regular meetings for years, while some are newer – but all had to adapt when the pandemic started. Most of them moved online, but this presented challenges, because some Palestinians do not have
a computer or smartphone and, among those who do, reliable internet
connection is sometimes problematic.

Of deeper concern is a fear of online exposure owing to potential backlash from social media extremists (a screenshot can be shared far and wide). Therefore, sadly, during the pandemic some groups lost members, but on the plus side, online meetings meant that people from the US and Europe started joining and learning about Israeli-Palestinian co-operation.

Now that restrictions have ended in Israel, there has been a resurgence in meetings activity.  Rabbis from the Sharon area and sheikhs from the Nablus area found it difficult to meet online, but a few weeks ago renewed their in-person meet-ups.

The Interfaith Encounter Association runs many groups, among them The Jerusalem Young Adults group, which was recently renewed and planned a joint Iftar during Ramadan to attract new people to join.

The Circle of Light and Hope, which includes Jews from south Jerusalem, Muslims from near Hebron and Christians from Bethlehem, has been running for around 11 years. It pivoted to Zoom when the pandemic started, and members are delighted to now be able to meet up again in person.

A few weeks ago, a group of rabbis from the Gush Etzion and Hebron Hills areas and sheikhs from Bethlehem met up for the first time in months. The group has been going strong for 10 years with many participants changing but a permanent core. They continued meeting on Zoom during the past year.

Roots, established in 2014, is a group of Israeli settlers working together with Palestinians on the West Bank. As part of its activity, it runs a series of interfaith groups. Just after Passover, Roots held a Maimuna celebration – one of the first major in-person events since the start of the pandemic.

“The Jewish community of Morocco has been holding this event for generations to bring together Jewish and Muslim neighbours, so we continued the tradition, with Moroccan Jewish food, dress and music,” says Rabbi Hanan of Roots. “There were about 80 young people, mostly in their 20s. It was very powerful and meaningful.”

More recently, Roots held a series of joint Iftahs. “We ate together, prayed together and talked together – just as it should be. We hosted two special guests – the mayor of the Jewish city of Efrat [Oded Ravivi] and Benjamin Horgen from Samaria on the West Bank. Benjamin’s wife, Esther, was murdered in a terrorist attack a few months ago. He spoke very movingly about the fact that his wife loved people and created connections between them – he is dedicated to continuing in her footsteps.” 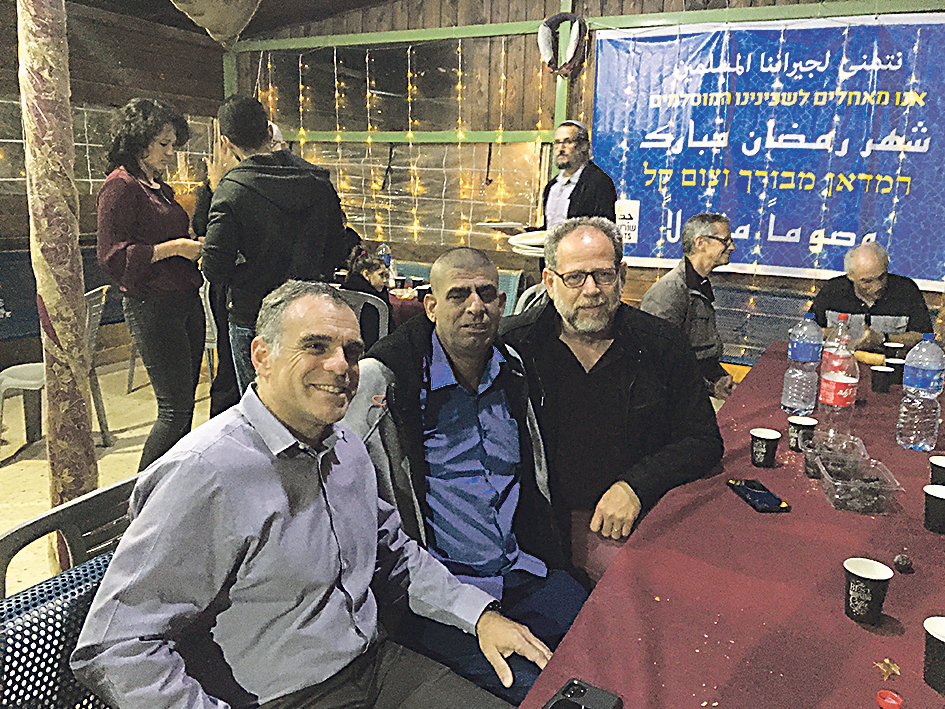 From left: Mayor Oded Ravivi, Ziad and Benjamin Horgen at an Iftar

As Ramadan approached, Roots printed 25 very large signs, which were hung in public places, with a message in Arabic and Hebrew wishing a blessed Ramadan and a meaningful fast to the local Muslim neighbours. Roots activists also stood at traffic junctions giving out water and dates to Muslim motorists as the sun went down and the fast came to an end. They raised money for local Muslims in need and distributed supermarket vouchers so people could buy food for the Eid al-Fitr holiday following Ramadan.

Has the pandemic had a positive impact on relations between the two factions? Covid-19 did not distinguish between Arabs and Jews and, in the hospitals, they worked tirelessly alongside each other to fight the virus (20 percent of Israeli medical staff are Arab). A survey by the Israel Democracy Institute in April 2020 found 77 percent of Arabs feel they are a part of the state of Israel and that they share in its problems. In similar annual studies from 2014 until 2019, this figure ranged from 35 percent to 62 percent at best.