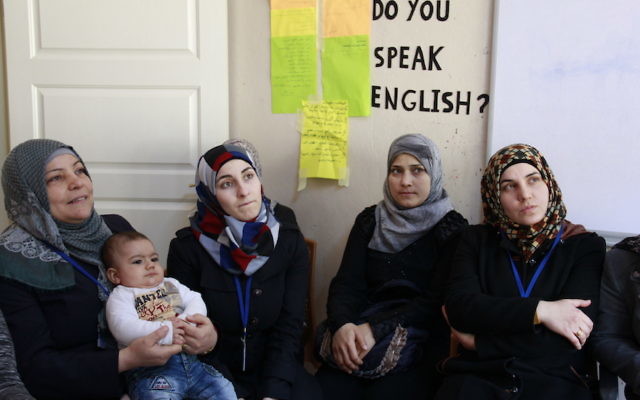 In a region awash with half a million Syrian refugees and the predators they attract, home used to be the only safe space for Samiyeh Hilo and her infant son, Mohammed.

A teacher of English in her 30s, Hilo was smuggled out of her besieged city of Hama in 2011 and into Turkey. She has mostly stayed indoors since settling in a camp for refugees of Syria’s civil war in the Turkish town of Islahiye, 70 miles north of Aleppo.

“I didn’t go out much because it’s not a safe environment for me and for my child, anything could happen,” Hilo, a devout Sunni Muslim, told JTA during a phone interview in December about her first five years in Islahiye, a suburb of the city of Gaziantep in Anatolia.

But Hilo’s situation and that of hundreds of other Syrian women in Islahiye improved dramatically in June when the London-based World Jewish Relief group and Turkish aid workers opened a women’s-only educational and recreation centre, offering a rare safe space for female clients.

“It completely changed my life,” Hilo said of the centre, where she now works as an English teacher for other refugees while her son is being looked after at an onsite nursery.

With an annual budget of under $200,000, the Women’s Support Center of Islahiye is operated by 18 female staffers — most of them refugees themselves — out of a three-story residential building with a pink facade on the outskirts of Islahiye.

More than 1,500 women have used the facilities, which World Jewish Relief designed and funds exclusively, with the Istanbul-based International Blue Crescent running the place on the ground as the implementing partner. Amenities include a computer room with 20 machines; psychotherapy sessions; Turkish and English-language classes; cooking and knitting workshops; child care services, and literacy training.

To be sure, the Women’s Support Center is not the only facility for refugees operating in the vicinity of Islahiye and Gaziantep, a nearby city that is a major destination in Turkey for immigrants from Syria. The United Nations High Commissioner for Refugees, the International Blue Crescent and the Red Crescent all have community service units for refugees in the area, where tens of thousands are serviced.

But before the establishment of the Women’s Support Center, “there was no space for women in Gaziantep and Islahiye,” Neslihan Kılıçarslan, a project manager for the International Blue Crescent, told JTA in an interview at her organisation’s office in Istanbul. And this is crucial, she said, “because Syrian women don’t want to go to a space that also has men. They are conservative and their husbands don’t allow it.”

Even among more liberal refugees, some women are hesitant to venture alone into the street in Gaziantep, where 350,000 refugees constitute a fifth of the population in the overcrowded city.

Relations between Turks and refugees are tense and sometimes turn violent, like in 2014 when thousands of Syrians left for fear of reprisals over the stabbing of a Turkish landlord by a refugee who felt he had been taken advantage of.

Women are especially vulnerable, according to a Council of Europe report from last year that cited multiple cases of rape, pimping, sexual harassment and gender-based violence, including in Turkey, which has nearly three million Syrian refugees. Children are another at-risk group, which Turkish and other sweatshop operators are quick to exploit.

Having identified the need for a women’s-only center, the International Blue Crescent wrote a project proposal, which World Jewish Relief — an international aid agency that British Jewry founded in 1933 – last year decided to support as its only sponsor.

The result is a place that stands out among facilities for refugees because “it has a lot of joy and hope,” said Tanya Freedman, the digital communications manager at World Jewish Relief. She visited the facility in November and, before coming to work at World Jewish Relief, was involved in helping refugees in France.

Most of the clients at the Women’s Support Center cover their heads, and some cover their faces, according to strict Islamic custom. They remove the face coverings once inside the building since there are no men around, Freedman told JTA in an interview this week in London.

One woman, 32-year-old Fatima from Aleppo, uses her time at the center to socialise, but also to make elaborate felt bags in bright pink colours with bamboo handles. She sells the bags for $3. Her friend Duaz, a 23-year-old mother of two whose husband died while fighting in the civil war, helps Fatima model the bags while wearing a face scarf. As the women chat at the centre, Duaz’s boys, aged three and five, play in the nursery with Fatima’s two-year-old son, Omar.

Many of the older women are protective of Sara and Amena, two 15-year-old girls who are among a dozen or so teenagers who make use of the center. Unlike the Aleppo-born Amena, who lives with her parents, Sara’s family is still in Syria, in Idlib.

“The women treat the girls, and Sara especially, as though they were their own daughters,” Freedman said.

World Jewish Relief, which has a core budget of approximately $6 million and about 22 salaried staff, has raised more the $1 million since 2013 for Syrian refugees – the second-most successful drive in the organisation’s history, according to Richard Verber, its head of external affairs.

Conducted alongside World Jewish Relief’s projects helping Jews in Ukraine and Moldova, the Syrian aid effort “reflects not only the generosity of British Jewry,” he said, “but also how the refugee experience strikes a chord in the hearts of a community with a strong generational memory of what it means to flee your home at a moment’s notice.”

The center does not display any mention of its Jewish sponsor, which is a prominent member of the OLAM network of Jewish international aid groups.

And while partner groups like the International Blue Crescent are aware of World Jewish Relief’s involvement, neither party broadcasts to the clients that one sponsor is Jewishly affiliated, said Verber, whose group’s logo is made up of the left half of a Star of David.

“Our priority is to deliver aid to those in need, full stop,” Verber said. “Sometimes we get the added bonus of exposing people to the substantial humanitarian work facilitated by British Jews, but in other cases, highlighting this could be complicated, exposing projects to risk. So while we never hide it, we don’t always insist on PR either.”

Elsewhere in the world, other Jewish groups have also raised considerable funds for Syrian refugees, including $2 million by the American Jewish Joint Distribution Committee’s Jewish Coalition for Disaster Relief.

Coming from some of Syria’s most rural areas – including Sunni provinces where residents were denied education options by the oppressive Alawite minority rule of President Bashar Assad – many refugees are illiterate.

Among the centre’s literacy students is 32-year-old Aliyah, a seamstress from Aleppo who came to Turkey six years ago with her 5-year-old daughter and husband. Aliyah is learning to read and write in Arabic and Turkish, and says she hopes one day to teach others in her position.

“It feels like at last I’m doing something of value,” she said in a recent interview with Freedman. “I love having somewhere to go where I can feel comfortable.”