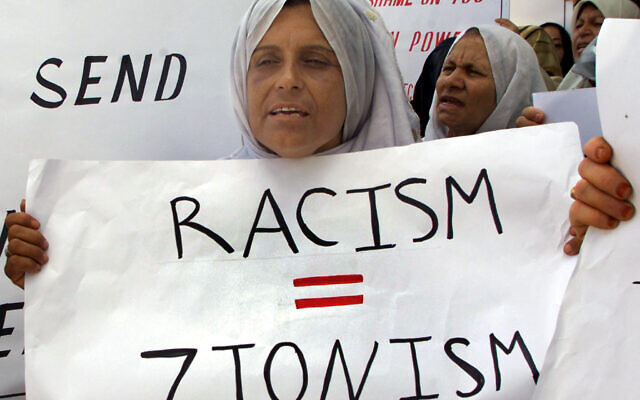 A Palestinian woman carries a banner during a demonstration in the Gaza Strip on September 5, 2001, ahead of the UN conference in Durban, South Africa (Photo: Reuters/Ahmed Jadallah)

British diplomats have intervened to prevent a United Nations body from passing an anti-racism resolution by consensus because of concerns the document downplayed antisemitism.

The declaration by the UN Human Rights Council, which is routinely accepted once every two years, was passed again on Monday.

But for the first time several nations including Britain voted to oppose it.

It contained multiple references to a 2001 conference in Durban, South Africa that was mired in controversy over accusations it singled out only Israel over alleged human rights concerns.

At the time, the US and Israel walked out of the meeting because participants drafted a conference declaration that denounced Israel’s treatment of Palestinians.

Several countries including Britain have since boycotted subsequent events to mark Durban’s anniversaries, including this year.

Simon Manley, the UK’s permanent representative to the UN and the World Trade Organisation, said the United Nations had “downplayed the scourge of antisemitism” for too long.

Britain called for a roll call vote at the Human Rights Council to prevent Monday’s resolution from passing by consensus.

Nine other countries joined the UK in opposed it, including France, Germany and Poland.

???????? The UK is committed to tackling anti-semitism and racism around the world ????

Our statement with Australia ???????? on why we could not support resolution presented at the @UN_HRC.

Pleased to be supported by friends including European allies????https://t.co/Y3C0mjxaA5

“We remain resolute in our commitment to combating all forms of racism, racial discrimination and xenophobia and related intolerance, whether that be at home or abroad,” Manley said.

“Our common commitment on this issue is strong.

“Discrimination of any kind has no place in society, and we will continue to treat all forms of discrimination with equal seriousness.”

Foreign Secretary Liz Truss said: “The UK remains steadfast in its commitment to tackling racism around the world.

“The resolution presented to the Human Rights Council today contains a number of references to the Durban Conference, from which the UK has repeatedly disassociated itself due to historic concerns over anti-Semitism.

“Discrimination and intolerance has no place in society and we encourage countries to uphold their human rights obligations.”