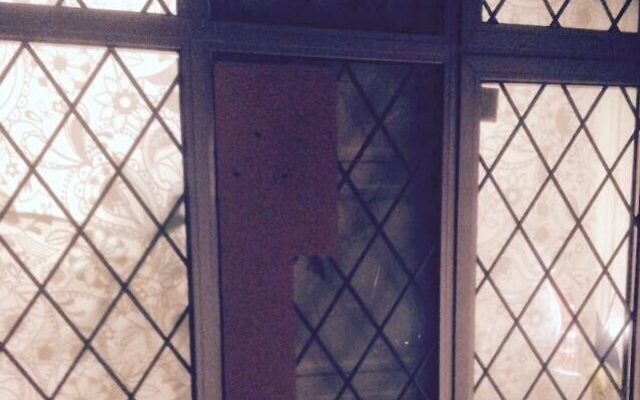 Police were this week scouring CCTV as part of an investigation into a series of anti-Semitic incidents in Barnet that included a brick being thrown through the window of a Jewish home in Edgware on Shabbat.

Patrols were stepped up to reassure the borough’s Jewish community after six incidents were reported in the Edgware and Mill areas areas over just a few days. It is not yet known whether the incidents are connected.

The previous day, offensive graffiti including “Heil Hitler” was discovered on a recycling bin an bollard in Daws Lane. That same night, at around 10.30pm, a woman was walking along Edgwarebury Lane when eggs were thrown towards her. Although nothing was said to the victim this is being considered as a hate crime.

Officers were called to a residential address in Hillside Gardens where a brick with a swastika and anti-Semitic slurs scrawled on it shattered a downstairs window in the early hours of Saturday morning.

Police are also investigating the discovery of a swastika drawn into condensation on a window in Watford Way, NW7.

No arrests have yet been made. Inspector Justin Zitver from Barnet Borough, said: “Whilst there is no evidence at this stage to suggest that these offences are linked, it is of great concern that members of our local community are being targeted in this way.
The Met is committed to working with our partners, to tackle all types of hate crime including the use of anti-Semitic language.

“We will have a number of ongoing reassurance patrols in the Borough and I would encourage anyone who has been a victim of crime, or who has any information that will help our investigations to speak with officers. Together, we can make every effort to hold the offenders to account.”

Gary Ost, CEO of Shomrim North West London, said: “These cowardly antisemitic attacks targeted Jews when they were asleep in their homes or walking with their families after dinner. These attacks are intended to instill fear in London’s Jews.

“The best response to these disgusting acts is to ensure that the perpetrators are caught. We are working closely with the Metropolitan Police Service and appeal for any witnesses to contact Police or Shomrim.”

A CST statement said: “CST has been giving support and advice to the victims of all six incidents since they were first reported to us and we have been working with Police to ensure that all six incidents are fully investigated. These incidents have been understandably distressing for the victims in question, and we will continue to ensure that they get all the help and support that they need.”

A Board of Deputies spokesperson said: “The low-lives who think it big or clever to menace Jewish families over the weekend deserve nothing short of our contempt. The perpetrators should face the full force of the law.”

Andrew Dismore, London Assembly member for Barnet and Camden, said: “These kind of disgusting incidents are totally unacceptable. Whilst attending the Holocaust Memorial Day commemoration at City Hall today, there could not have been a better reminder of why it is still so important to educate people about anti-Semitism. It is shameful more of these incidents have happened here, given Barnet is home to the largest number of Jewish residents  in the country.

“The need for organisations like Shomrim and the Community Safety Trust is sad but entirely necessary for occasions such as this. I have already raised these incidents with  the police   and I am pleased that they have stepped up reassurance patrols. I will also be following up  the police response in the next meeting of the City Hall Police and Crime Committee, of which I am a member.”