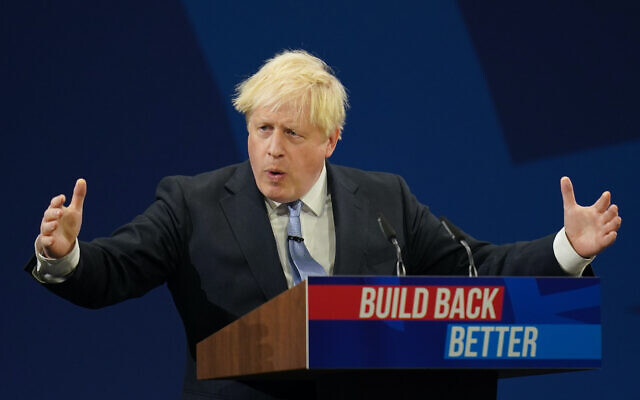 Boris Johnson has used his speech at the Tory Party conference to suggest he has the “guts” to bring further revival to the UK after the pandemic – while he blasted Jeremy Corbyn as a “corduroy Communist cosmonaut” sent “into orbit where he belongs” at the last election.

In a speech on Wednesday that drew both loud applause and laughter from the party faithful in Manchester, the Prime Minister said he would unleash the “unique spirit” of the country as he set out on the “difficult” process of reshaping the British economy.

Defending the need for the health tax hike – to fund a £12 billion annual investment in health and social care – Mr Johnson said: “We have a huge hole in the public finances, we spent £407 billion on Covid support and our debt now stands at over £2 trillion, and waiting lists will almost certainly go up before they come down.

“Covid pushed out the great bow wave of cases and people did not or could not seek help, and that wave is now coming back – a tide of anxiety washing into every A&E and every GP.

“Your hip replacement, your mother’s surgery … and this is the priority of the British people.”

The rising tax burden caused concern among some Tories, but the PM told activists in Manchester: “I can tell you – Margaret Thatcher would not have ignored the meteorite that has just crashed through the public finances.

“She would have wagged her finger and said: ‘More borrowing now is just higher interest rates, and even higher taxes later.’”

Johnson also attacked what he said was a “hopelessly divided” Labour Party under Sir Keir Starmer.

He said Starmer looked like a “seriously rattled bus conductor” at last week’s conference in Brighton who had been “pushed this way and that by a Corbynista mob.”

Johnson also used his 45 minute long speech to attempt to spell out what his “levelling-up” agenda actually means.

“The idea in a nutshell is you will find talent, genius, care, imagination and enthusiasm everywhere in this country, all of them evenly distributed – but opportunity is not,” he said.

The Prime Minister said Team GB’s second place in the Paralympics medal table demonstrated a country that was “proud to be a trailblazer” and “to judge people not by where they come from but by their spirit, what is inside them”.