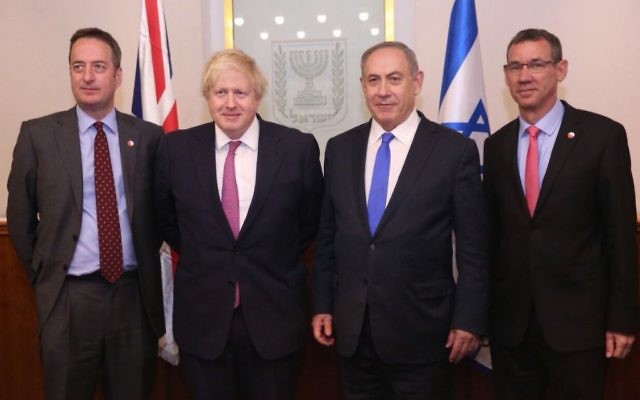 The Foreign Secretary and the Israeli prime minister discussed the two-state solution to the Israel-Palestine conflict during the talks.

Mr Johnson also used the visit to Israel to seek to boost trade as part of the Government’s drive to build international links ahead of Brexit.

In a message on Twitter after his talks with Mr Netanyahu, the Foreign Secretary said they “discussed two states solution, trade and concern over illegal settlements”.

Mr Johnson also posted on Facebook that he believes there is a “real opportunity to get a lasting peace but we need bold Israeli and Palestinian leadership”.

He said: “I’m here on a trip to Israel and the occupied Palestinian territories and talking to Prime Minister Netanyahu, President Abbas, about all the challenges they face and of course the opportunities.

“As we go out into a world to do new free trade deals, Israel and the dynamic Israeli economy is one of our first ports of call, and trade between our countries is growing all the time and we see every opportunity to increase that.”

The Foreign Secretary was briefed by anti-settlement campaigners Peace Now on the situation in the West Bank.

“We emphasised to him the importance of stopping settlement expansion in order to preserve the possibility for a two state solution,” the group said on its Facebook page.

Mr Johnson visited Israel for the funeral of former president Shimon Peres in September, but his last working trip to the country was as London’s mayor.

During the 2015 trade mission, he branded calls for a trade boycott against Israel “completely crazy” and said only a few snaggle-toothed “lefty academics” pursued the cause.

The pro-Israel comments led to a series of meetings planned with Palestinian groups being axed.

Earlier this year, Israel’s ambassador to the UK was forced to apologise after an embassy official was caught in an undercover sting discussing how to ”take down” Foreign Office minister Sir Alan Duncan and dismissing Mr Johnson as ”an idiot”.