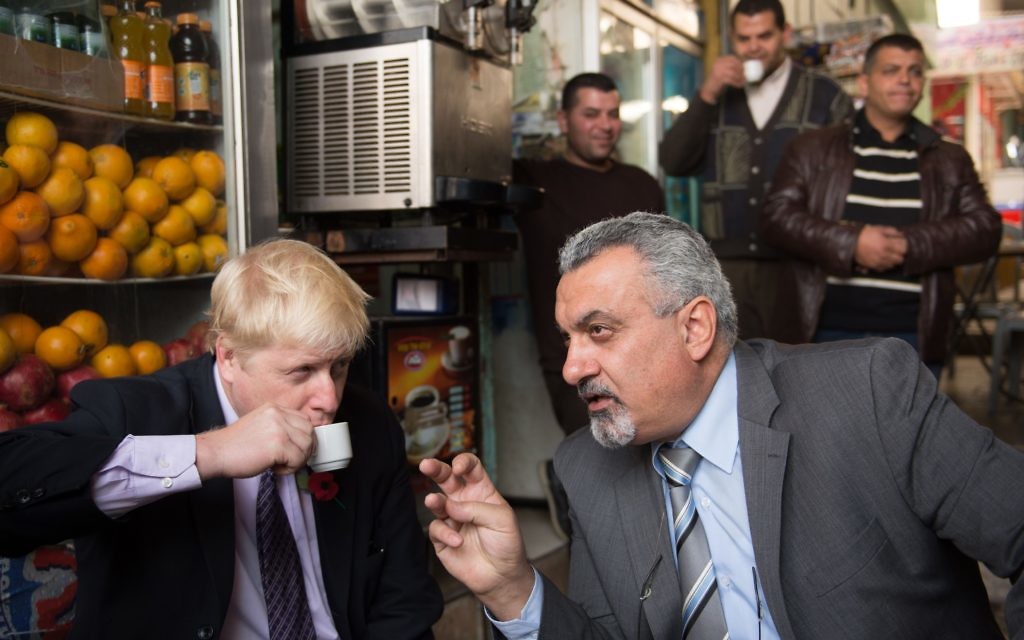 Mayor of London Boris Johnson has a coffee with adviser to the Palestinian president Ziad Al-Bandak in the Old City of Jerusalem during a tour of the historic town on the third day of his trade visit to Israel. PRESS ASSOCIATION Photo. Picture date: Tuesday November 10, 2015. See PA story POLITICS Johnson. Photo credit should read: Stefan Rousseau/PA Wire

Mayor of London Boris Johnson has a coffee with adviser to the Palestinian president Ziad Al-Bandak in the Old City of Jerusalem during a tour of the historic town on the third day of his trade visit to Israel. Photo credit: Stefan Rousseau/PA Wire

Boris Johnson has insisted he will not tone down his language despite the collapse of his Palestine tour.

The Conservative MP claimed there is a risk that nobody will understand what he is saying if he adopts a more restrained approach, hours after event organisers refused to host him for “misinformed and disrespectful” pro-Israel remarks.

Mr Johnson said he will “stick to his guns” after repeatedly opposing the idea of boycotting Israeli goods, in line with British Government policy, when addressing supportive audiences in Tel Aviv and Jerusalem.

But his choice of words and focus on “corduroy-jacketed, snaggletoothed, lefty academics in the UK” pursuing the cause resulted in his trip to the Palestinian city of Ramallah being cut short.

The Sharek Youth Form refused to host the London Mayor as they believed he had failed to acknowledge “our very existence as Palestinians”, while the Association of Engineers said it was protesting over his “sarcasm” on the boycott movement and his ignorance of Israeli “crimes”.

Mr Johnson still met Palestinian Authority Prime Minister Rami Hamdallah but said he was advised that his security would be “perhaps at risk” if he went ahead with the other visits in the West Bank.

The farcical end to the three-day trade mission came after meetings with several senior politicians in the region and further hints about his ambitions to lead the Conservative Party.

Before departing Jerusalem, Mr Johnson also said resolving the Israeli-Palestinian conflict will require a “great deal of courage and imagination” from the Israeli leadership.

Asked if the Ramallah incident had highlighted a need for him to change his language when appearing on the world stage, Mr Johnson told the Press Association: “No, on the contrary I think it shows you it’s very important to stick to your guns and it’s very, very important when you’ve got a message to get across that you get it across and I genuinely think that boycotts don’t work.

“The great future for this part of the world is going to be if the Israeli economy – all the things that are happening here, the benefits of that – can be translated to other parts of the region.

“You’ve seen that to some extent in Jordan where there’s a very, very active tech sector, the Palestinian occupied territories are starting to pick up – trade with the UK has gone up 400% just in the last year.

“That’s the way forward. A boycott is a very retrograde step and, unless you say things powerfully and clearly, the risk is nobody will understand what you’re saying.”

Mr Johnson also rejected a suggestion that he could have followed his own advice and offered opinions which his supporters in Israel would disagree with.

During the Tel Aviv leg of his tour, Mr Johnson used an audience with former Israeli prime minister and president Shimon Peres to stress that great leaders must risk their popularity by being prepared to “betray” their biggest backers in the pursuit of doing the right thing.

The MP for Uxbridge and South Ruislip argued that his lecture on former prime minister Winston Churchill was met with disapproval by some Israelis in the audience in Jerusalem.

He said this was caused by his point on how Churchill believed everything in the area should benefit all the people, not just either the Palestinians or Israelis.

Mr Johnson explained: “I saw actually that there were a lot of people in that audience who suddenly folded their arms and pursed their lips and didn’t like it at all.

“There are messages you’ve got to get over and I do think, if this thing is going to be done, it’s going to take a sense from the Israeli public that they are secure and that they’re not vulnerable to terrorist attack of any kind – whether it’s knives or bombs or guns or whatever.

“But it’s also going to take a great deal of courage and imagination by the Israeli leadership. That was a point I was trying to make.”