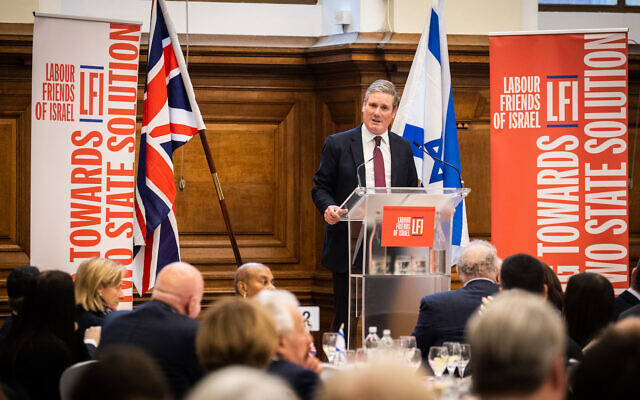 Specialist officers called in to deal with parked vehicle outside Westminster Central Hall on Tuesday – but in an embarrassing development it emerged that the car was being rented by Bedfordshire Police.

The LFI event had been scheduled to begin at midday – but guests, including Board of Deputies President Marie van der Zyl and Labour shadow foreign secretary Lisa Nandy were seen arriving to find the area around the central London venue cordoned off.

Security teams from the Community Security Trust were seen in discussions with police over the scare, which began just before the event was due to begin.

The parked vehicle had five of its windows smashed in by a specialist team from the Metroplitan Police before officers realised it was being used by another force.

The Guardian reported on Wednesday that it was believed the Bedfordshire force had rented the black Nissan Qashqai but failed to display a police logbook in the window to show the vehicle was safe.

The delay to start of the LFI event meant that a planned Loyal Toast, due to be made by shadow chancellor Rachel Reeves, and a toast to the President of the State of Israel, by Baroness Ramsay were scrapped from the packed event, attended by over 300 peoplee.

Starmer and Hotovely both spoke at the event, which finished at around 2.30pm.

A Met spokesperson confirmed officers smashed windows on the vehicle, but denied a control explosion had taken place.

He said: “The car was a rental vehicle [and] did not belong to the Metropolitan police service.” He said officers believe it was operated by Bedfordshire police.

He added: “Police were made aware of a suspicious vehicle on Matthew Parker Street, SW1, shortly after 12pm on Tuesday 16 November. Specialist officers attended and the vehicle was examined.”

A Bedfordshire police spokesperson said the force used the car as part of an operation mainly conducted in London. Police were unable to verify with the car hire company that Bedfordshire police had rented out the vehicle in time to prevent the windows being smashed.

The bomb scare came a day after the terrorist threat level was increased from “substantial” to “severe”, after an explosion in a taxi outside a women’s hospital in Liverpool.

The new level means an attack is judged to be “highly likely”.