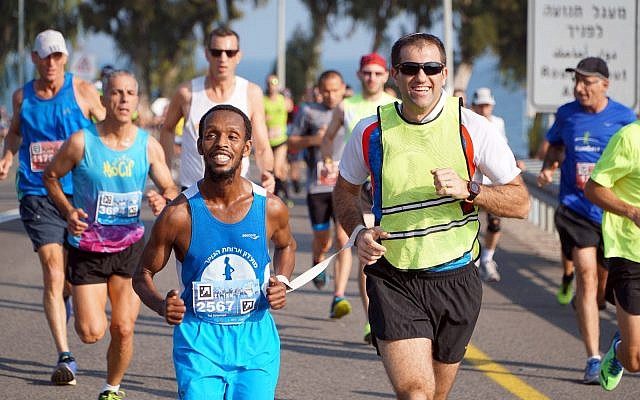 A blind Israeli runner will run both the Abu Dhabi and London marathons, raising money for a guide dogs charity in the process.

Father-of-seven Avi Solomon, 38, has not stopped running since he lost his sight nearly two decades ago.

He is being sponsored in his feat by the Jewish News, and will compete in the London Marathon in a t-shirt bearing our logo – while also raising money for the Israel Guide Dog Centre.

Avi came to Israel from Ethiopia as part of Operation Moses, where he had a challenging upbringing.

He first began losing his sight at the age of six, following an infection he contracted while he was living in a village on the outskirts of Gondar in Ethiopia.

His sight came back temporarily following surgery on both eyes when he was 14, but it gradually deteriorated.

He also sadly lost his mother at a young age, leaving his father to raise the family solo. But running has helped him to deal with his grief, he said.

“I started running in Ethiopia, my love of running has kind of been in my DNA from day one. Sadly having so much grief in my life, I’ve turned it to be a strength.

“I’ve got family and friends with me when I do it. I’ve flipped his sadness into ‘nothing’s impossible.’”

Avi has set himself the gruelling challenge of both competing in Abu Dhabi, and London – with the marathon in the UAE possible because of the Abraham Accords.

“The normalisation initially came through political leaders but then was organically grown through friendships and people-to-people,” he said.

“People are people, regardless of religion … I’m very excited about it.”

With his spot in the London Marathon, Avi will be aiming to raise around £45,000 for the Israel Guide Dog Centre, who last year helped him get his guide dog, Nike.

Beforehand, he had walked with a cane in Israel, which he found extremely challenging. “Just walking on the street with a stick, you’re constantly surrounded by people on electric scooters, on their phones, not paying attention,” he said.

“I was in fact knocked over in that period by someone on a scooter. It’s a very scary place.”

Having a seeing dog has changed all that, he told Jewish News – so he hopes to raise enough money to provide someone else with the vital lifeline.

“The dogs are not only friends, they’re soulmates. The level of communication is so high,” he said.

“I want to shine a light on the fact that some people aren’t independent because they don’t have seeing dogs, and create much more awareness for donations to be able to support those people, like I’m lucky to have.”

“We all look up to Avi as a shining light here,” he said.

“He’s taken this on himself as part of what he says is his ‘payback’ to the centre for giving him a guide dog. He goes about his life in Israel now, he travels the country, he has more than one job, and part of that is he has the guide dog with him.”

The guide dogs charity will be holding a special anniversary event at the Jewish Museum on October 4, where guests will hear from Avi, while the runner will also be honoured at a special event at the London Stock Exchange with the support of Justine Zwering, head of Primary Markets Israel.