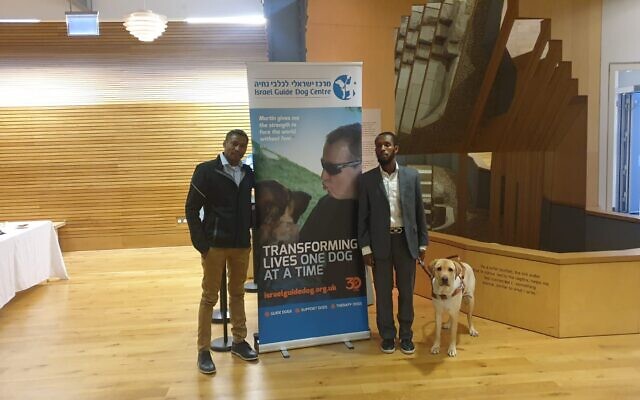 Avi at the charity's 30th anniversary event at the Jewish Museum

A blind Israeli marathon runner has managed to raise around £5,000 despite having to stop at mile 20 of the race after being knocked over.

Father-of-seven Avi Solomon raced the London Marathon at the weekend to raise money for the charity Israel Guide Dog Centre.

The Jewish News teamed up with the runner to media sponsor his visit to London for the race.

Avi, who is blind and uses the assistance of guide dog Nike, had been on track to run the marathon in a stunning three hours.

But after colliding with other runners three times, the athlete unfortunately had to be taken to hospital by ambulance, although he has since recovered.

“We’re all very upset about it, but hopefully he’ll try and come back next year.”

Luckily, Avi made a quick recovery, and was able to attend a 30th anniversary event held by the charity at the Jewish Museum, as well as a reception hosted by the London Stock Exchange at the invitation of Justine Zwerling, its head of Primary Markets Israel.

The charity hopes to hold other events to celebrate its 30th year, including a charity cycle on tandem bikes in Israel, all to raise awareness of the importance of guide dogs.

The centre provides guide dogs for blind people, for IDF veterans suffering from PTSD, and therapy dogs for children with autism.

Money that Avi has raised will go towards a new guide dog for someone in Israel. “The dogs become their eyes and ears, and Avi has mentioned that since he’s had Nike, his guide dog, his opportunities have blossomed and exploded,” said Mr Segal.

Speaking to the Jewish News previously, Avi said: “I want to shine a light on the fact that some people aren’t independent because they don’t have seeing dogs, and create much more awareness for donations to be able to support those people, like I’m lucky to have.”