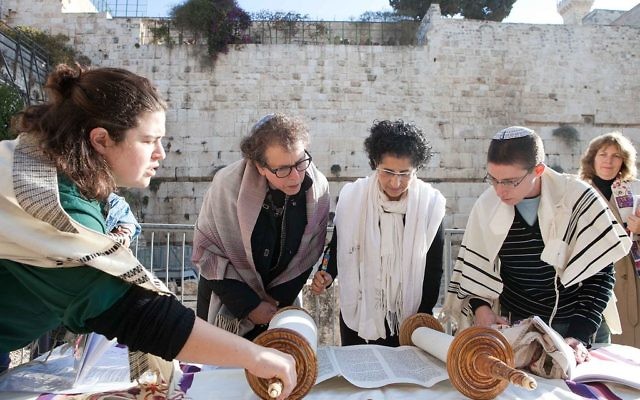 A bill to prevent non-Orthodox public prayer at the Western Wall has been submitted to the Knesset.

A fine of some $2,500 or a six-month prison sentence would be levied on participants in egalitarian prayer services or on women who use a tallit or tefillin.

Lawmakers from the Sephardic Orthodox Shas party and the Charedi Orthodox United Torah Judaism party are backing the bill, along with three members of the right-wing Jewish Home party and two from the ruling Likud party.

The bill would prohibit any ceremony “that is not held according to local custom, that offends the feelings of the worshipers in the holy place.”

It also would bar “an act that could disturb the worshippers with their prayer; mixed prayers of men and women” in any area of the Western Wall plaza. That would include “a ceremony in the Women’s section that includes taking out the Torah scroll and reading from it, blowing on shofars, and wearing prayer shawls or phylacteries.”

Passage of the bill would torpedo the agreement in January for an egalitarian prayer section at the Western Wall negotiated by the Reform and Conservative movements, the Women of the Wall organisation, the Jewish Agency for Israel and the Israeli government.

“This bill makes a mockery of all the efforts made by recent governments to ensure that the Western Wall is a place that unites, rather than divides, the Jewish people,” Sharansky said in a statement.

“This bill’s passage would have grave consequences for the relationship between Israel and Diaspora Jewry. Based on the Prime Minister’s strong personal commitment to strengthening the Israel-Diaspora relationship, it is my fervent hope that this damaging bill will be summarily dismissed by a majority of the coalition and of the Knesset.”

Under the January agreement, which was approved by the Cabinet, the egalitarian section of the wall near Robinson’s Arch would be expanded and placed under the authority of a pluralist committee. The plan called for solidifying Charedi Orthodox control over the site’s traditional Orthodox section.