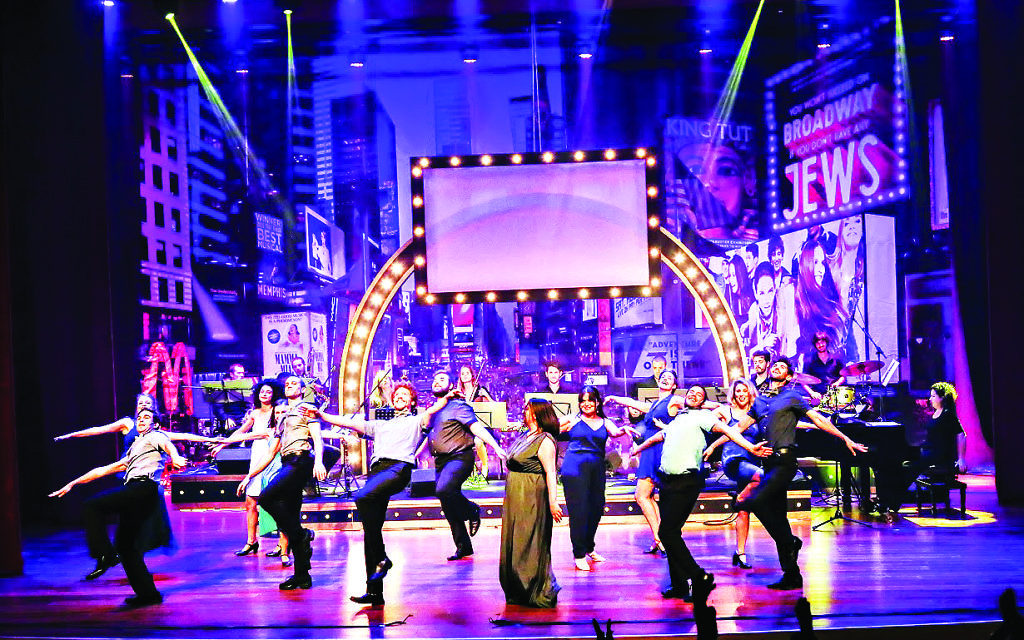 Porgy and Bess, Gypsy, Guys and Dolls: so many of the best-known shows that have graced our theatres have originated in the minds of Jews. It seems crazy that a production celebrating the immense, colourful Jewish contribution to musical theatre has taken so long to arrive – but it is finally here.

You Won’t Succeed On Broadway If You Don’t Have Any Jews is a fun-filled celebration of more than 80 years of the Jewish impact on musical theatre from the 1920s to today, featuring classic tunes by George and Ira Gershwin and Irving Berlin through to hits from contemporary musicals such as Rent, Hairspray and Parade. The company producers, Collaborative Artists, are two young Jewish actors, Daniel Donskoy, 25, and Michaela Stern, 22, who were inspired to put on the show after last summer’s unpleasant rise in anti-Semitism.

“The original concept of the show came about last summer, during which Jewish communities all over the world were dealing with a vigorous rise in anti-Semitism,” Stern says. “A prime example was the constant racist and uneducated social media posts and comments in relation to the Gaza-Israel conflict.”

Donskoy, from Berlin, whose family are originally from eastern Europe, and Stern, from Essex, who attended King Solomon High School, are both passionate about the Jewish community and feel worried about its representation in recent years.

“As unfortunate as it may be, the Jewish community is normally seen as either victims of the Holocaust, people of great wealth and power (in its most negative way) or as direct representatives of Israeli politics,” says Stern.

“We felt that as young members of the Jewish community and as two people who care a lot about Israel, we were obliged to not just vocalise our disappointment, but to act upon it.”

Donskoy adds: “The emphasis of this show lies upon the celebration and acknowledgement of the immense contribution that one fairly small immigrant group provided to such a profound industry – show business – but musical theatre in particular.”

He continues: “Music is something everyone connects to and it is through music that we want to raise awareness of those marvellous achievements of the greatest Jewish composers.”

Donskoy and Stern ultimately hope that as well as enjoying a glitzy, joyous, entertaining journey through musical theatre history, the audience will get an insight into the Jewish community behind the political headlines.

“Audiences from all faiths and backgrounds will enjoy a hugely entertaining evening and for some it might be a big surprise: ‘Oh, who knew my favourite show tune was written by a Jewish composer?’” says Donskoy. “The idea behind it is firmly based on the fact that the arts – and music in particular – can connect people in a much stronger way than any politician ever will.”

The production is set to be a real showstopper, with the biggest hits from every decade to be performed by seasoned Jewish West End performers, a dancer’s ensemble and an eight-piece band. Think bold, flamboyant, unashamed pizzazz, with energetic performances of showtunes from Cabaret, Annie Get Your Gun and many more.

The cast are fresh from performing in Tel Aviv on an Israeli tour, which Stern and Donskoy describe as a “massive learning curve”.

“The Mediterranean has a bit of a different approach to work ethics and general etiquette,” Stern says. “It was a big shock to all the team, but on the last day everyone shed a tear as it was such an emotional journey. Many of our cast members felt spiritually enlightened by working in the Holy Land.”

With the producers so young, there will be many decades of great work left in them – but what is next for Collaborative Artists?

“We are currently in talks about a co-production of an incredible musical. As nothing is yet confirmed, we need to keep some secrecy about it, but
what we can say is that we are utterly inspired by the story told in the piece,” Stern reveals.

“A musical about working women, minority groups living together and a lot of love. Hopefully we will be able to announce it very soon but, until then, trust us that you are going to love this show.”

So what is it about Jews and the knack to pen a legendary tune? Donskoy and Stern put it down to our tradition and our history, with each festival having its own unique songs and prayers.

“Many of the composers who made it big on Broadway immigrated [to the United States] from Eastern Europe,” Donskoy says.

“The Jews living there had adapted many Jewish melodies into folk songs – normally out of three or four simple chords. Many of these melodies later made it onto Broadway. The most simplistic melodies were the ones audiences could immediately pick up and hum on their way home from the theatre. Or perhaps all these speculations are in vain and it’s all about the Jewish mazel!”

Even the musical theatre legend Cole Porter, one of the non-Jewish exceptions among Broadway’s biggest success stories, was inclined to agree that when it comes to showbiz, we Jews have a knack with music and lyrics. He once said of his career: “The key to my success is to write Jewish melodies.”

In the words of those musical legends, Gershwin and Berlin, Strike Up The Band, because when it comes to great theatre, There’s No Business Like
(Jewish) Show Business.

You Won’t Succeed On Broadway If You Don’t Have Any Jews is on at St James Theatre from Tuesday, 25 August to Saturday, 5 September. Details:
www.stjamestheatre.co.uk