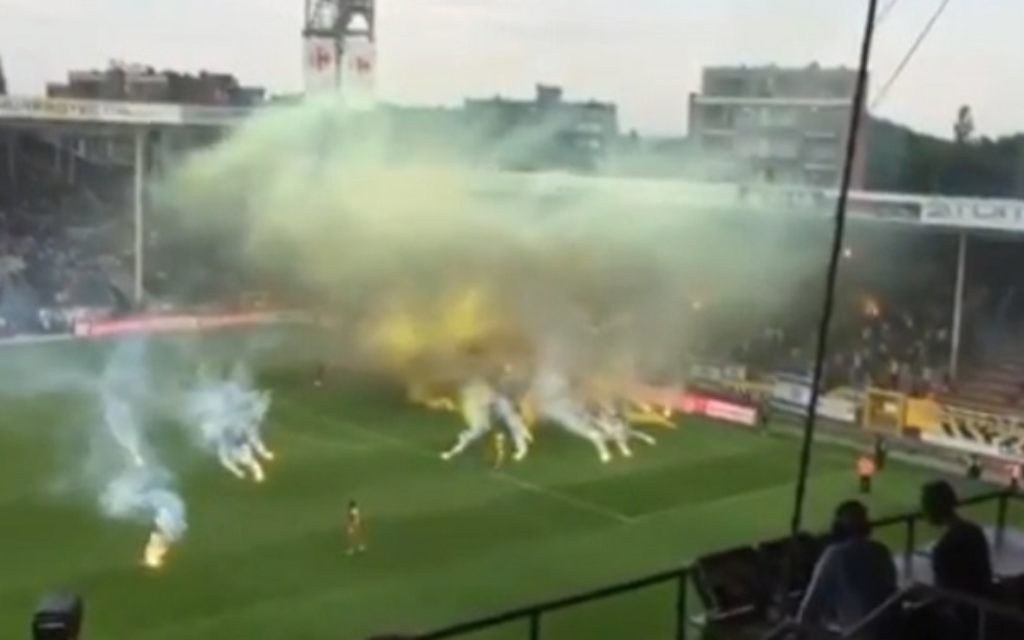 Beitar Jerusalem owner Eli Tabib has he was putting the Israeli Premier League club up for sale after supported threw smoke bombs, flares and firecrackers during their 5-1 Europa League qualifier defeat against Belgian side Charleroi.

Beitar, also saw two men sent-off in a what was to prove a night of shame, both on and off the pitch. The game in Belgium was delayed at the start as fans smoke bombs on to the pitch, while at the end of the game, Charleroi goalkeeper Nicolas Penneteau was hit by an object, which resulted in another delay.

Speaking on Friday, Tabib said: “I am ashamed… I have decided to end my involvement with Israeli soccer and am returning to the United States… I will appoint a trustee to run the club until somebody is willing to buy it.”

Israeli media claimed Charleroi fans had made Hitler salutes during the match, while Beitar coach Slobodan Drapic said he felt Beitar fans had been provoked.

Israeli Sports Minister Miri Regev referred to the supporters involved as a “small group of thugs” on her Facebook page, that they had defamed Israeli football and has asked Israeli police to cooperate with their Belgian counterparts. Beitar are set to host the second leg on Thursday at Jerusalem’s Teddy Kollek Stadium, with Regev saying security should be tightened and called for Beitar fans to be banned from attending.

On the pitch, Dovev Gabay had pulled the Israeli side level with a 35th minute equaliser, as he cancelled out David Pollet’s opener. However, once Eli Dasa was sent-off in first half stoppage time, Charleroi took full advantage. as
Neeskens Kebano score twice, with Pollet and Florent Stevance completing the scoring, Pablo De Lucas also saw red for Beitar in the 76th minute.

Israel’s other side in second round qualifying action on Thursday night was Hapoel Beer Sheva, and they earned a 1-1 home draw against Swiss side FC Thun. Ovidiu Hoban had fired the Israelis ahead midway through the first half, but an 87th minute penalty from Gianluca Frontino ensures the Swiss side go into next week’s second leg as favourites to progress.

Meanwhile, the draw for the third qualifying round was made on Friday. Should Beitar somehow manage to turn around their 5-1 deficit, they would face Ukrainian side FC Zorya Luhansk, hosting the first leg, Hapoel Beer Sheva would face either Lithuanian side FC Vaduz or Estonian’s JK Nomme Kalju, also hosting the first leg, while Hapoel Kiryat Shmona, who enter the competition at this stage, take on Czech side FC Slovan Liberec, with the return leg in Israel.