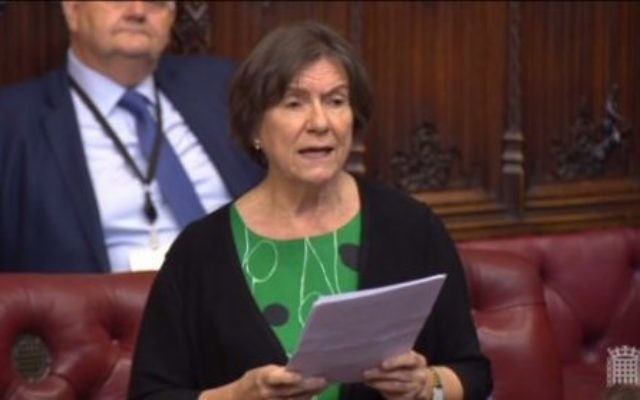 Baroness Jenny Tonge has stood down as patron of Palestine Solidarity Campaign (PSC), after a “deeply troubling” Facebook post – which appeared to blame Israel for a resurgence in antisemitism – in the wake of the deadly Pittsburgh massacre.

The anti-Israel peer was condemned after she claimed that Benjamin Netanyahu’s government was responsible for a rise in Jew-hate, shortly after Robert Bowers allegedly killed 11 people at The Tree of Life Congregation in the US.

Writing on Facebook on Saturday, Lady Tonge said: “Absolutely appalling and a criminal act, but does it ever occur to Bibi and the present Israeli government that it’s actions against Palestinians may be reigniting anti Semitism? I suppose someone will say that it is anti Semitic to say so?”

The former Liberal Democrat peer, who now sits as an independent, is known for her anti-Israel views, and has in the past been accused of antisemitism.

In a statement, the PSC said: “Baroness Tonge has offered to stand down as a patron of PSC. In agreeing with this course of action, PSC wishes to acknowledge the enormous work Baroness Tonge has done over many years to bring attention to the injustices suffered by the Palestinian people and to campaign for them to be brought to an end.”

In the aftermath of the massacre of 11 Jewish worshippers at a synagogue in Pittsburgh, Baroness Tonge posted a comment on Facebook that suggested Israel’s policies and its treatment of the Palestinians could be contributing to a rise in anti Semitism generally. Baroness Tonge subsequently removed the post.”

PSC regards the original post to be deeply troubling. Whilst the post acknowledged that the killings were appalling and a criminal act, it risked being read as implying that antisemitism can only be understood in the context of a response to Israel’s treatment of Palestinians. Such a view risks justifying or minimising antisemitism.”

PSC understands antisemitism to be prejudice, hostility or hatred towards Jews as Jews. It is never to be condoned or justified. The killings in Pittsburgh were an appalling crime motivated by antisemitism and we stand shoulder to shoulder with Jewish communities in opposition to antisemitism and all other forms of racism.”

Following the announcement, Jenny Tonge again to Facebook, to say: “PSC are very worried about the furore surrounding my remarks following Pittsburgh and I have resigned to save them embarrassment!!!” 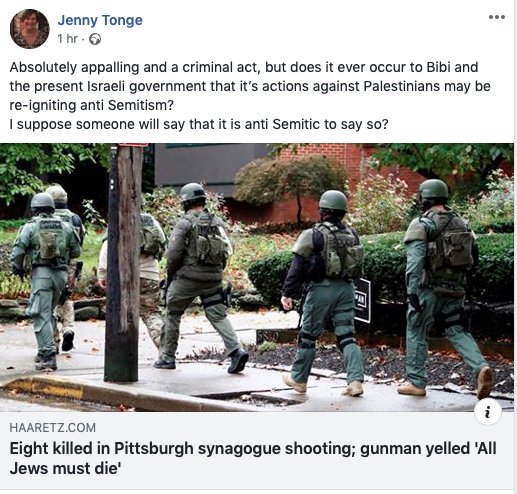 There was also criticism in the House of Lords of Baroness Tonge, Tory former cabinet minister Lord Pickles said her comments would “cause great pain in Pittsburgh”.

Communities minister Lord Bourne of Aberystwyth said the issues “must not be conflated”.

Lady Tonge failed in her repeated attempts to intervene, leaving her visibly frustrated.

Peers heard there was “clear evidence” the suspect in Pittsburgh had previously posted anti-Semitic comments on social media.

Earlier, Lord Bourne had told peers: “No one should be afraid to practise their faith and our places of worship should not be places that engender fear.

“We will not let fear overcome us. Hatred will not win.”

Lord Pickles called on the minister to condemn the “the words of Baroness Tonge in suggesting that the murders in Pittsburgh were caused by the actions of the Israeli government”.

He said: “That clearly will cause great pain in Pittsburgh and falls foul of the International Holocaust definition of anti-Semitism.”

Lord Bourne said: “I do so pretty unreservedly. These issues must not be conflated in the way that the baroness sought to conflate them.”

Lord Carlile said: “Given the clear evidence that the perpetrator of the Pittsburgh outrage posted anti-Semitic comments on the internet… is it not time the Government took the internet service providers to one side and say to them that it is their responsibility to remove this kind of outrageous material, or that the Government will have to do it for them with the support of both Houses of Parliament?”

Responding, Lord Bourne said: “We are seeking action here. Some are more willing to assist than others, but it is clear that they do have an overriding responsibility. What has happened in Pittsburgh simply underlines that.”