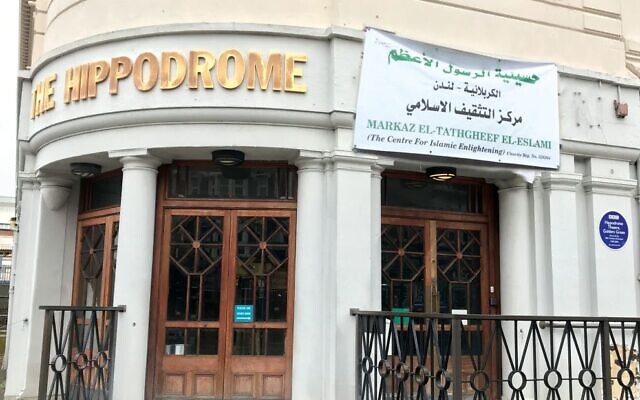 Barnet Council officers have recommended the approval of an Islamic centre in Golders Green at the former Hippodrome.

The proposals were outlined ahead of a crunch strategic planning committee meeting on Monday 19 July, at which the local authority could give the green light for the Markaz El Tathgheef el-Eslami centre.

This comes after lawyers acting for the Markaz warned the Council it they could face legal action over alleged “unlawful religious discrimination”, due to the handling of the application.

In the agenda for the meeting, objections to the application were put forward, including accusations its approval would breach local residents’ “human rights” and create “insecurity” for local Jewish people.

It said during a public consultation in which 1,571 letters were sent out, with 902 objections and 756 letters of support received.

In November 2019, the council issued an enforcement notice alleging that the Markaz was breaching the conditions of the building’s use. In response, the Markaz applied to change the use of the building, which should have been a straightforward procedure, given that it didn’t involve any building work or substantive operational changes.

Local residents at the time complained the application “would see significant intensification of the use of the Hippodrome with up to 3,000 attendees between the hours of 8.00am and 11.30pm”. The Markaz hit back however, with a spokesperson saying: “The highest ever attendance at the Markaz is capped at 1400 people maximum which occurs very rarely and is well below the Hippodrome’s capacity. ”

Objections included a “tremendous increase of noise, congestion and lack of parking” which would “change the nature” of the area. There were also concerns raised about its potential impact on local traffic, pollution, conservation, and the wider community’s ability to access its facilities.

Another complaint was that its approval would be a “contravention of the Human Rights Act” due to its impact on for residents. Its potential effect on “religious tension” was also raised, with an objector claiming it would lead to “insecurity to the local Jewish community”, calling it a “grave error to place a Muslim centre of worship here”. There would be “an increase in antisemitic abuse”, said another complaint.

The officers responded in the agenda, saying that that “even though racial tensions can and do on occasions arise between different communities and persons of different religions, there is no evidence that in the event of planning permission being granted for the proposal, significant tension between different communities amounting to harm would be likely to arise in this case, in particular given the outreach, education and other programmes which exist to minimise and avoid such tensions.”

The agenda also highlights significant support for the project, which officers recommend the council adopts.

Backers recognised that the community escaped Saddam Hussein’s regime 30 years ago and settled in Barnet, which is “a place for many different religious communities”.

One Jewish supporter said: “The members mostly live locally and have escaped repression like so many Jewish people locally. There are parallels which bring us together.”

Another accused objections of engaging in “nothing more than thinly veiled Islamophobia”, highlighting a local synagogue’s efforts supporting the Islamic Somali Bravanese community in 2013 after its place of worship was hit by an arson attack.

Earlier in July, local progressive synagogues were among those lending support to the Markaz’s application, and leading communal figures have also visited the site to lend support.