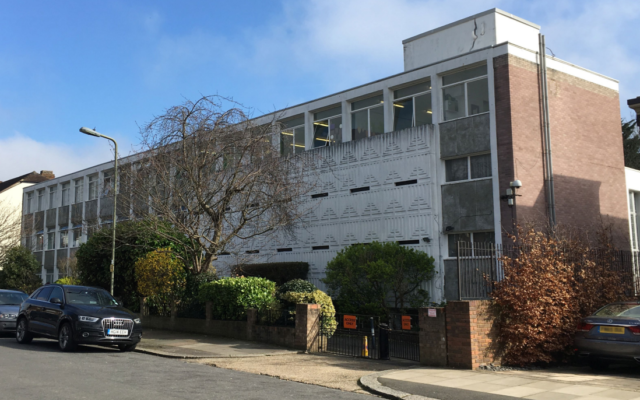 A rare hearing of Barnet Council’s Licensing Sub-Committee is due to be held on Thursday November 11, to consider the continued intention by a Jewish boys’ school in Hendon to let out its hall for simchas and communal events.

Angry residents of Danescroft Avenue, a cul-de-sac in Hendon, have complained that since June this year, the Talmud Torah Tiferes Shlomo school, which occupies the former Hendon Reform Synagogue building, has been renting out its hall for “impossibly noisy” events, including weddings and barmitzvahs, with large numbers of guests.

One neighbour told the Jewish News: “We want to make a distinction between the school and the hall. We have no issue with the school, and in fact many neighbours are very supportive of it. The problem is the letting of the hall, which the school say brings it extra revenue — but they have admitted themselves that it is not possible to use the hall without serious disruption”.

Neighbours have told JN of “massive disturbances” on the nights that the hall has been used, with catering trucks, huge amounts of traffic unsuitable for a quiet road, and noise from music and guests standing outside the hall until the early hours of the morning.

Initially, after a petition was circulated in June by residents, an “Unlawful Certificate” was issued by Barnet Council relating to large events with external catering and more than 75 guests.

But because this was a civil, rather than a criminal, matter, the council’s planning department appeared reluctant to enforce this ruling — and so it was ignored by council and hall owners alike.

The residents decided to approach the council’s licensing department on the grounds that alcohol, music and food were being made freely available without proper permission. In response, the school applied for Temporary Event Notices, or TENs, one-off licences applicable to individual events. The school would be entitled to 15 separate such TENs in a year.

Residents declared that this was “ludicrous. Since the only parties which can oppose a TEN are the police or Environmental Noise and Nuisance, it was decided to prove to ENN the level of disruption taking place every time there was an event in the school’s hall”.

The residents provided photographs and video footage, including images of loading trucks in the small street, before and after events. The council decided it had enough material to object to the school’s next application for a TEN — understood to be an upcoming event on November 20.

One resident said: “We understand that the school wants to increase its revenue but this is not the way to do it. Young children are constantly woken up, older residents find the presence of so many people somewhat intimidating. We have implored people who are considering hiring the school hall to look at other venues — and if the school loses at Thursday’s hearing, then of course those who have booked weddings or other simchas may find it too late to switch venues.”

A Barnet Council spokesman said: “In terms of this application, it is possible for premises to apply for a Temporary Event Notice to allow them to sell alcohol and provide entertainment without having to apply for a full premises licence. If they apply, certain responsible authorities can make representations within a prescribed timescale.

“In this case, it looks like the school has already used a couple of TENs in the past for other events which have resulted in noise complaints from neighbours. Environmental Health say that the school has not engaged with them about this and possible mitigations. This is why it’s at a hearing”.

The JN has asked for comment from the school.