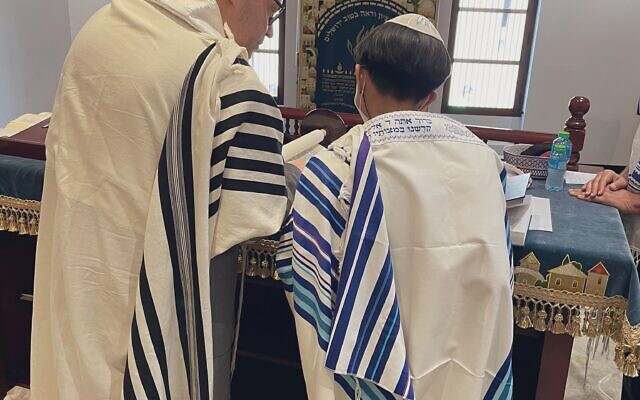 The bar mitzvah boy, who was not named, read from a Torah scroll commissioned by Jared Kushner (Photo: Association of Gulf Jewish Communities)

Bahrain’s small Jewish community celebrated its first bar mitzvah in 16 years as the kingdom prepares to mark the first anniversary of the Abraham Accords.

The ceremony took place in the House of the Ten Commandments in the country’s capital Manama, which hosts the only operational synagogue in the Gulf region.

Bahrain’s Jewish community has been growing since the country signed the Accords, a series of normalisation agreements with Israel.

The Association of Gulf Jewish Communities (AGJC) did not name the bar mitzvah boy but said he read from a Torah commissioned for Bahrain’s king by Jared Kushner, the former White House senior adviser.

“It is a very exciting time for Jewish life in the GCC as more families celebrate Jewish milestones more publicly,” said Eli Abadie, the AGJC’s rabbi.

“In addition to this young man’s bar mitzvah, we recently celebrated a bat mitzvah for a young woman in Oman and we have a number of other Jewish lifecycle events which will take place before the end of the year.

“This is an affirmation of the continued growth of Jewish life in the region.”

The bar mitzvah was part of a weekend of festivities including a Shabbat dinner and the first Sephardic Selichot service in the Gulf region.

Ebrahim Dawood Nonoo, the AGJC president, said it was a “joyous occasion for our whole community, and we wish the young man and his family a Mazal Tov.

“It is incredibly special for us to use the Torah Jared commissioned in honour of His Majesty for the first time this weekend in the lead up to Bahrain’s first anniversary of signing the Abraham Accords which is all about creating a better life for the youth in our region – including this young man.

The Abraham Accords have seen Israel establish diplomatic relations with some other Arab countries for the first time.

The United Arab Emirates opened an embassy in Tel Aviv earlier this summer, while Foreign Minister Yair Lapid oversaw a mezuzah being affixed on new Israeli offices in the Moroccan capital Rabat on August 12.

Closer relations are also expected between Israel and Sudan under the accords.

“We are thrilled to share this weekend with the broader AGJC community and our Muslim friends who joined us for the festivities including the Bar Mitzvah,” Nonoo said.

“One of our guests shared that this was her first time in Bahrain, and she came for a Shabbat dinner and a Bar Mitzvah.”