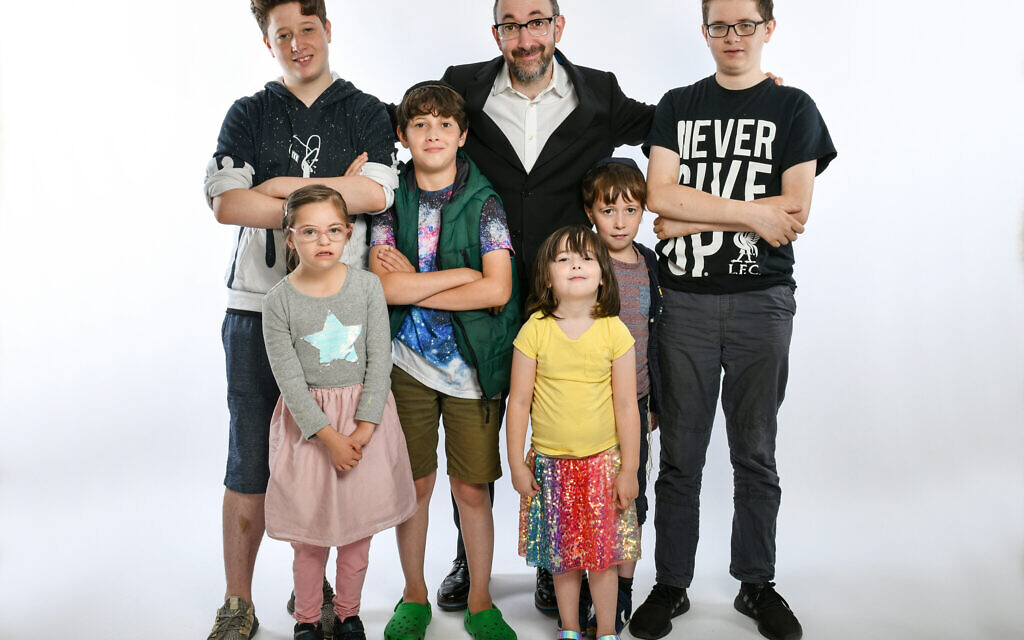 Ashley Blaker with his brood of half a dozen children, three of whom have special needs

Ashley Blaker is making something of a departure. No, not the type that most people would like to make to sunnier climes without having to quarantine, but rather a move in a different direction for his latest comedy project, which launches on Radio 4 this week.

Having made a name for himself as the fresh face of Orthodox Jewish comedy, Blaker’s religious identity – which he largely embraced in his twenties – has always been front and centre of his material.

In 2017, he was commissioned by the BBC to create a show called Ashley Blaker’s Goyish Guide To Judaism, which was described as “an insider’s view of his religion”.

That was followed up by his debut stand-up show, Observant Jew, at the 2018 Edinburgh Festival Fringe, while two years ago, he teamed up with Muslim comedian Imran Yusuf for their UK tour, Prophet Sharing.

This time, however, rabbis make more of a cameo appearance and the Jewish jokes simmer away in the background, but are not the focus.

His life as a father, with wife Gemma, of six children – including two autistic boys and an adopted girl with Down Syndrome – are at the very heart and soul of his new series, which takes a wry look at the world of parenting.

Ashley Blaker: 6.5 Children is a warts and all mix of stand-up and observational comedy that finds, even amid the madness of lockdown, missing phone chargers and the demands of raising special needs children, there are moments with more laughter than tears.

The idea for Blaker’s latest radio show – and a national tour inspired by it that launches next year – came about after he heard “gasps” from audiences each time he mentioned he had half a dozen children.

“Audiences, particularly non-Jewish ones for instance, just seemed so surprised and interested,” says Blaker, who went to Haberdasher’s Boys’ School in Elstree with Matt Lucas and went on to produce his series Little Britain.

“It made me realise some things are more interesting than you take for granted. People would kind of gasp, but as I would say, ‘Guys, you don’t even know the half of it.’”

At the top of the challenges with which he has to cope is looking after three children with special needs. 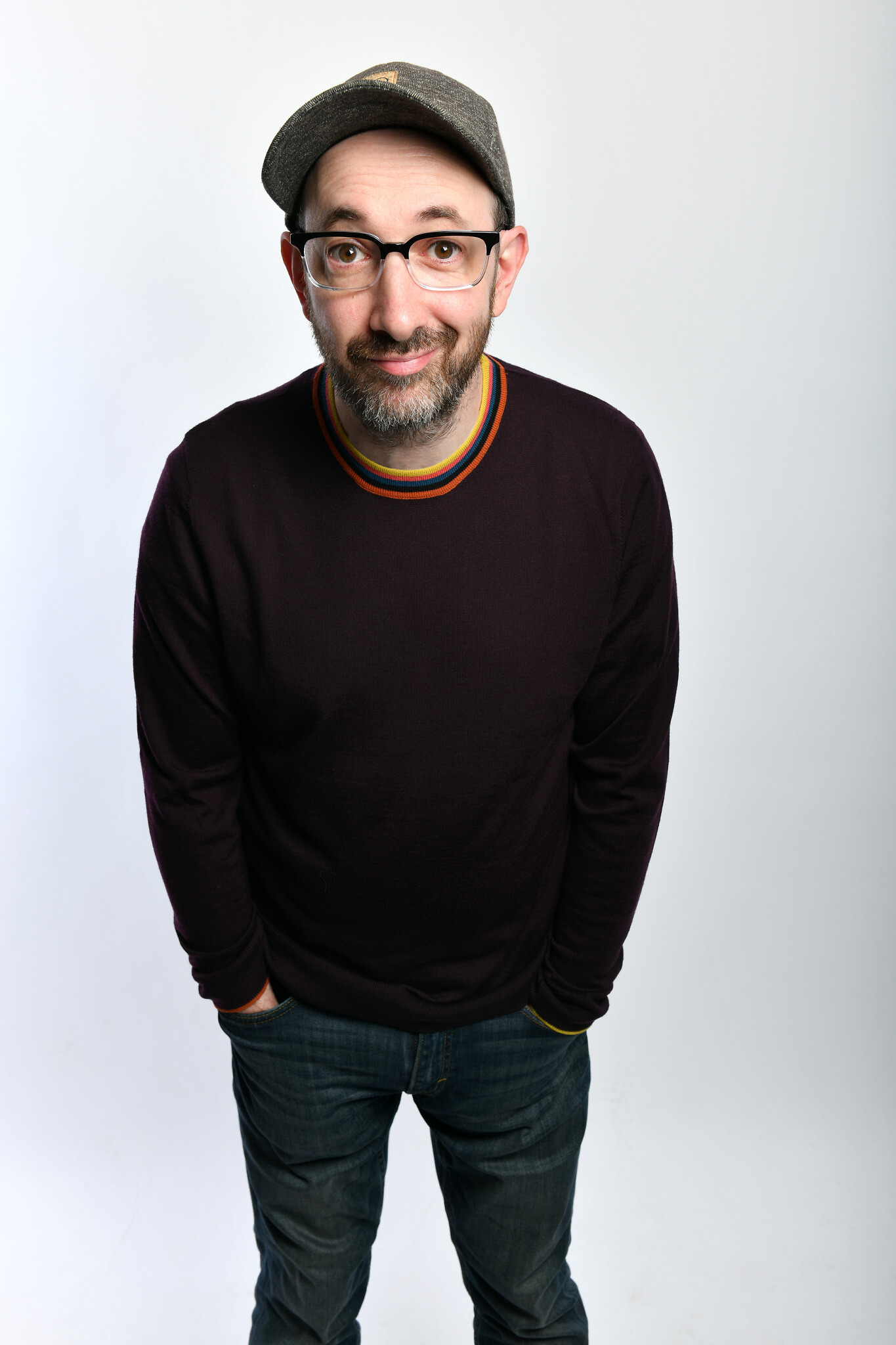 Blaker went to Haberdasher’s Boys’ School in Elstree with Matt Lucas and went on to produce his popular comedy series, Little Britain

Comedy provided a coping mechanism for the Edgware resident to deal with, as he calls it in his typically droll way, “meetings, meetings and incessant meetings”.

He tells me: “Soroh, who has Down syndrome, has a gastro specialist, audiology specialist, eyesight, ENT and mobility specialists. We have it all. You know you’ve got a lot going on when Great Ormond Street gives you your own parking space.

“You could have 10 regular kids and it wouldn’t make a difference. Your experience of school could be never having to speak to the school very often at all, but I’ve never had that. We seem to have endless meetings. You know, review meetings, assessment meetings, start of term, middle of term, end of term meetings, planning meetings, even pre-planning meetings!”

He adds: “When you go into the meeting you immediately know how it’s going to go, because if it’s more positive, they put biscuits on the table. And if it’s a more negative one, they put a box of tissues. I’ve seen the tissues before and thought I’ll just make an excuse to move the car and leave. You become quite adept at handling these things.”

The story of how he came to adopt a child with Down syndrome is deserving of its own episode – the second programme in the series. His love for Soroh is obvious – in fact he heart-warmingly admits he loves her more than his biological children.

But at the time of her adoption 10 years ago, he and Gemma had their hands full with three young boys, prompting many to ask why they wanted to put themselves forward.

“It’s so hard to kind of explain, but you know when sometimes people commit crimes or do crazy things, they say, ‘it was like a moment of madness came over me’. Well, it was a bit like that,” he says dryly. “A weird moment of madness came over both of us, because all logic would suggest it wouldn’t be a great thing to do. They advertised all over the world for quite a long time to find the right parents.

“People would say why and, to paraphrase Edmund Hillary, ‘because she was there’. We certainly never had an interest before to adopt a child, because we could have our own children.”

Blaker’s parenting skills have never been so tested, however, than in the past year, when he suddenly found himself home schooling six children across a range of ages and abilities, an unenviable experience he explores in the fourth episode.

He recalls: “What was incredible was how selective the children became with regards to their ability to use technology. They are so technologically proficient. I mean, they come out of the womb and can set up a Snapchat account. They can do stuff we can’t, it’s natural to them. But when it came to home schooling, suddenly they forgot it all and they can’t just be left to their own devices, literally or figuratively.

In between all the stresses, the review meetings and hospital appointments, one gets the feeling Blaker really loves being a parent and he even concludes by the end that 2020 presented him with “a kind of golden period in some regards”.

He smiles: “Maybe it brought us all together a bit closer as a family. We got to see the children in a new light and spent a bit more time with them – and we got to have a year off from all the birthday parties.”

Ashley Blaker: 6.5 Children begins on Friday, 11.30am on BBC Radio 4 and is also available on BBC Sounds. For details of his national tour, starting in May 2022, visit socomedy.co.uk