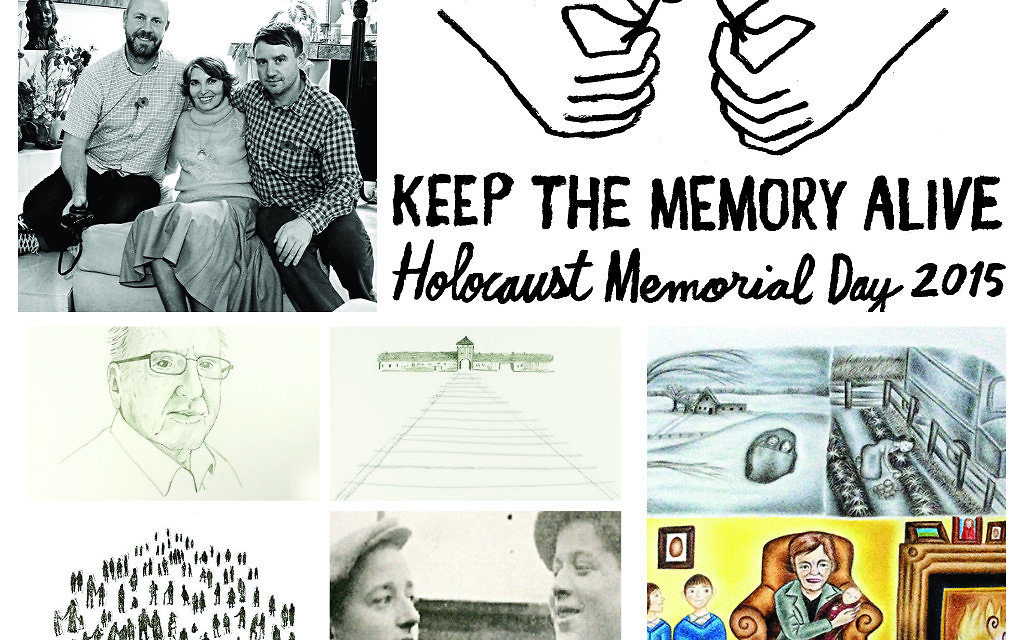 Artwork inspired by powerful stories of survival have been unveiled ahead of Holocaust Memorial Day.

The seven works form part of a major project that also commemorates the 70th anniversary of the liberation of Auschwitz-Birkenau.

Writers and artists, including broadcaster Stephen Fry, whose maternal relatives were murdered at Auschwitz, were paired with survivors living in the UK and responded with poetry, ceramics, sculpture, animation and film.

The Memory Makers project, organised by the Holocaust Memorial Day Trust, also features the story of a man who survived the Bosnian genocide, which marks its 20th anniversary this year.

German-born cellist Anita Lasker Wallfisch was 14 at the outbreak of war. In 1942, her parents were taken away and, it is believed, murdered near Lublin, Poland.

A year later, she and her sister Renate were sent to Auschwitz. She survived nearly a year at Auschwitz because she was selected as a member of the camp orchestra.

The group also performed for individual SS staff and Anita was asked to play for the infamous Dr Josef Mengele. She and her sister were liberated by the British Army from Bergen-Belsen in 1945 and later moved to the UK, where she co-founded the English Chamber Orchestra.

Broadcaster and actor Stephen Fry presents Art, Music, Life, a written response to Anita’s experiences, exploring the idea of music and evil – and whether art can survive the worst of human atrocities.

Stephen says: “It’s hard, it’s grotesque and it’s almost unbelievable, but as witnesses to the imponderable brutality and evil of the Holocaust dwindle in number, so swell in number those who choose, for whatever reason to deny its existence. “Holocaust deniers are finding it easier and easier to wave a hand dismissively and claim that there’s no proof, that the numbers are wholly exaggerated, that it was all a myth.”

In an extract from Art, Music, Life, Stephen writes:

Born in Warsaw, Poland, in1922, Sabina is the only survivor from her close-knit family. Her parents caught typhus, while her siblings were presumed murdered by the Nazis. Aged 20, Sabina escaped the Warsaw Ghetto and survived in the countryside by taking on false identities.

During the winter of 1942-43, Sabina and her friend Ruszka took shelter in a hole in a forest created by partisans.

One day, Ruszka left alone to search for food and did not return. Now aged 92, Sabina is a great-grandmother. Her only possession from childhood is a red cardigan given to her by her mother, which she wore during her time as a fugitive.

Visually-impaired artist Kimbereley Burrows has created an illustration simply titled Sabina, which uses a mix of coloured and black and white pencils to help capture the past and depict the present.

Kimberley was struck by Sabina’s “haunting” description of her younger self hiding with a friend in the forest against a snowy backdrop.

The piece also shows Sabina today surrounded by her grandchildren, with the youngest wearing her cherished red cardigan.

Kimberley says: “I learned about the brief history of these devastating events during school, but I never had that powerful first-hand account. It highlighted just how important these personal stories are. They are a part of our history and should not be forgotten. We must keep the memory alive.”

Now aged 82, Hungarian-born Ivor was 12 when he was taken to Auschwitz. He and his brother survived, but they lost their parents and seven siblings in the Holocaust. After coming to the UK, Ivor rebuilt his life, marrying and having four children and six grandchildren.

Many years later, he made an emotional return to Hungary. Film-maker Gemma Green-Hope has created a short animation simply named Ivor Perl. She felt a personal connection to the project as her stepfather’s grandmother was killed in Auschwitz.

She says: “Meeting Ivor and hearing him speak about his experiences was incredibly moving, and hearing his testimony made me reflect on how many people’s lives and stories were lost. It is impossible to sum up his life and experiences in a short animation, but I think that people connect more to a human story than to facts, and I hope that hearing him speak touches them as it touched me, and inspires them to learn more.”

The animation consists of hand-drawn images, portraits of Ivor and photographs

When Janine was nine, the Germans invaded and her family were forced to move into the ghetto. Her mother caught typhus and died, while her father was shot. Following this, her uncle found non-Jewish families willing to shelter Janine outside the ghetto.

She and her seven-year-old brother moved in with a non-Jewish family, but were betrayed. Her brother was killed by an SS officer, but Janine survived the war by working as a shepherdess, living in a convent while pretending to be Catholic and serving as a maid.

She escaped to Paris after the war and moved to the UK in 1956. Director and writer Debs Paterson has created a short film, Nazi Boots, based on Janine’s childhood memories.

The title was inspired by the nightmares Janine experienced years after the war ended of soldier’s boots hunting down her family.

Debs says: “I was massively impacted by the sense of how Janine has lived through so much pain and injustice – things that must be impossible to come to terms with or understand, especially as a child – and yet she is an intelligent, warm and gracious woman with a sparkle in her eye. We hope… people [will] have an emotional as well as an intellectual connection with what happened to Janine and other Jewish families like hers.”

Stills from Nazi Boots, the short film made by director and writer Debs Paterson. The film is based on the childhood experiences of Polish-born Janine Webber, who survived the war

Bettine escaped with her family from Belgium to Bordeaux at the start of the war. Her family was later transferred to the concentration camp at Gurs, where she and her brother were separated from their mother. Disease, starvation and overcrowding were rife within the camp.

In 1940, Bettine and her brother were smuggled out of the camp by an infiltrator from the huminatarian organisation OSE. She went to Switzerland and lived out the rest of the war with a kind farming family. She went on to a successful acting career starring in the Benny Hill Show, and played Professor Dent’s secretary in the first Bond film, Dr No.

In a recent interview with Jewish News, O’Neill said: “I’m really interested in possessions, mementos and objects that can be metaphors for other stories. This is an amazing opportunity because it’s so real. I haven’t been able to meet and speak to and understand anyone who I have made art about.”

Andrew said they hope to produce “something that illuminates the energy and light and positivity that comes out of Bettine’s life story”.

Now aged 84, Eve was a young child when her family were torn apart as they escaped from their native Germany to France. After her father was interned by the French, Eve and her sisters were sent to a home run by the Jewish welfare organisation, Oeuvre de Secours aux Enfants (OSE).

In 1941, the OSE obtained a special visa for the United States. In a twist of fate, Eve and her older sister Ruth took the place of two children who had suddenly fallen ill. Eve believed she would never see her family again, but her sister Lea was hidden by the French Resistance, while both her parents endured four French concentration camps.

The family reunited in 1946 in New York. Frustrated by broken memories, it was only years later Eve discovered all that had happened. London-based poet Sarah Hesketh has written 10 short poems, entitled Grains of Light, to reflect Eve’s fragmented memories.

These include the time a Nazi soldier scooped her up and threw her into the air as a young child and the small numbered tag she wore when she arrived in New York. Sarah says: “The part of Eve’s story that had the biggest impact on me was her own journey through traumatic memory loss.

I felt like she had had to suffer a double tragedy, surviving both the horrors of Nazi Germany, and the subsequent unravelling of her own identity. “I didn’t know anything about child survivors before working with Eve.

Given that those who were children during the Second World War are now quite elderly themselves, it’s important we listen and learn from them.”