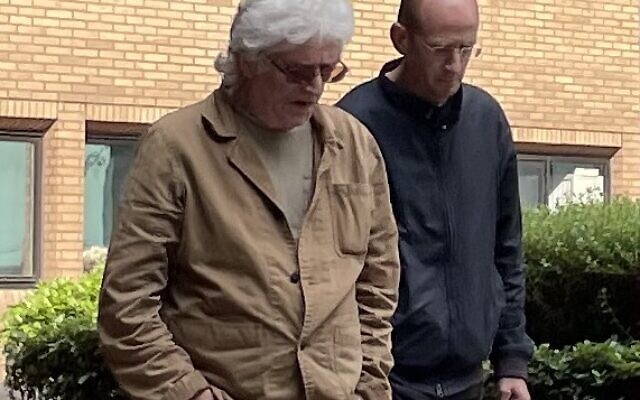 An aristocrat has been jailed for four months and ordered to pay over £20,000 after calling the head of the Campaign Against Antisemitism “Jewish scum.”

Piers Portman, the youngest living son of the 9th Viscount Portman and heir to 110 acres of West End real estate, was found guilty last month of making the remarks to Gideon Falter at a courthouse following the 2018 sentencing of notorious Holocaust denier, Alison Chabloz.

Sentencing Portman today at Southwark Crown Court, HH Judge Gregory Perrins said he has “strongly-held antisemitic beliefs” and that he deliberately targeted Mr Falter because of his role in prosecuting Chabloz.

HHJ Perrins imprisoned him for four months, with the possibility of release on licence after two months, and ordered him to pay a £10,000 fine.

He must also pay an additional £10,000 compensatory payment to Mr Falter, as well as court costs. Mr Falter is donating the entire £10,000 to Campaign Against Antisemitism.

Portman’s remarks came after he reportedly followed Falter out of court when he testified against Chabloz in a 2018 case.

The aristocrat became “very enraged” at Falter before telling him, “I have written to you before. Come after me, you Jewish scum. Come and persecute me. Come and get me”.

In the letter, he calls her a “greedy, grasping and lying manipulator of the system that happens to be Jewish.” He also accused her of “playing the Talmud inspired ‘Tyrant posing as a victim.’”

Gideon Falter said: “I am extremely reassured by this sentence, which sends a very clear message to antisemites that even the wealthiest and most privileged cannot escape British justice.

“I have been awarded £10,000 in compensation which I am donating to Campaign Against Antisemitism to help us ensure that anti-Jewish racists like Mr Portman face the consequences of their actions.”