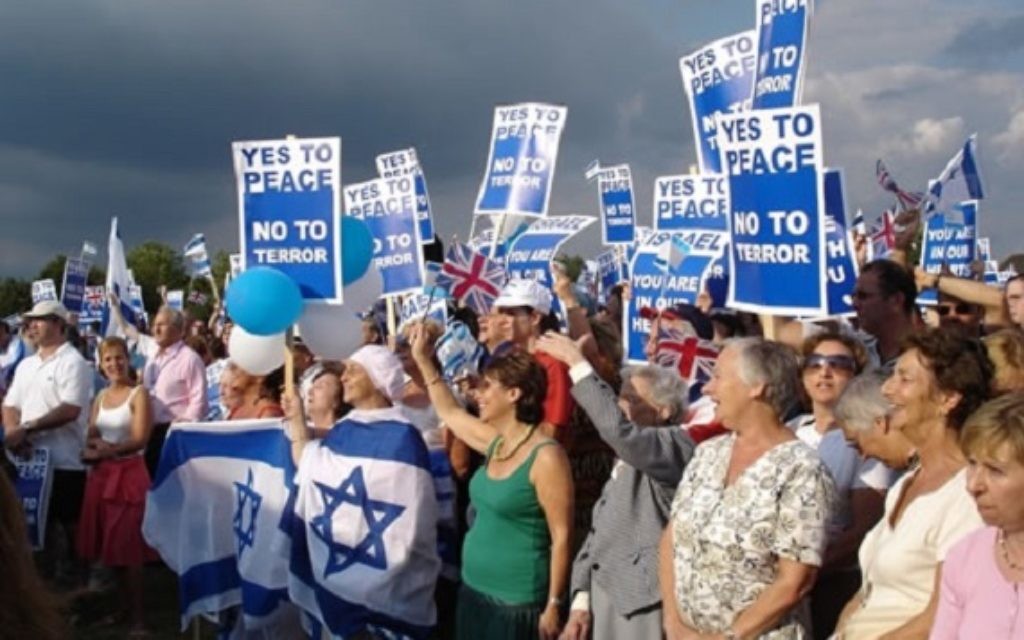 A Pro-Israel rally in London .

By Michael PEARL, University of Birmingham.

As a young boy growing up in North West London attending both Jewish primary and secondary schools, it seemed common sense that my Jewish identity should go hand in hand with a love and support for Israel.

To me this was never a disputed issue, and it was not until I began studying at the University of Birmingham that my assumptions were questioned by several of my peers, and suddenly I had to reconsider these assumptions.

Birmingham Jewish Society has been an amazing access point for me and many others attempting to break out from the Jewish bubble that is North West London into the ‘other’ bubble of university life. It has been a source of friendship, excitement and numerous chicken dinners which simply would not be an option on a typical student budget.

Yet it has at times been a source of controversy, especially during the heights of Israeli-Arab tensions.

Last year, there were two rallies in support of ‘Justice in Palestine’ on campus which were both countered with rallies organised by Birmingham Jewish Society.  These were heavily attended by both sides, yet many questioned how effective J-Soc had been.

There was singing, chanting, and banners. However, feedback from the J-Soc committee suggested there was a lack of discussion between the two sides. Many argued via Twitter and Facebook that Birmingham Jewish Society was becoming too political, and there was a subtle calling for a separate society reserved for Israel advocacy as an additional branch of the Jewish Society.

At first glance this seemed absurd but as a regular Birmingham student, rather than a Politics student, I began to see how this may appeal to some people.

First year J-Soc members may not necessarily be as interested in student politics but rather a calm environment to help settle into university life. Coming to university is an exciting, daunting experience and any Jewish society is a massive helping hand to Jewish students all over the UK.

But is the pressure of Israel advocacy too much?

My own view on this issue is that Zionism is an integral part of a Jewish Society. One of the factors of Birmingham Jewish Society that I am most fond of is the fact that nothing is compulsory. Any level of orthodoxy is welcomed, and, in my experience, no one is made to feel uncomfortable by their outside activities. Yet that does not mean that we do not have a responsibility.

As I was walking on campus whilst numbers attending the pro-Palestinian rally were growing, a non-Jewish friend of mine told me that he had no idea of the situation in the Middle East as well as what the rallies were about. This is where my sense of Judaism and Zionism reconnected, as I felt it my responsibility to explain the situation to the best of my ability.

I felt I was making a very small, yet vital, contribution to Israel advocacy.  If Jewish students decide to refrain from such advocacy and only a small handful that were in this separate and theoretical Israel advocacy society continued, would we be able to have this sort of positive effect on other students?

Those who are not informed will believe whatever they are told first. This is not to say that we should make sure we get there first to throw our opinions in people’s faces, hoping to persuade them to join our ‘side’. However Jewish students have a responsibility to set out the facts and avoid misrepresentations and distortions as to the issues surrounding Israel and the conflict.

Campus life is an environment where student voices are very much heard and can be extremely influential to others. Despite frequent talks on anti-Semitism and racism prior to university, I have as yet been free from such experiences, and it has been a walk in the park attending university whilst keeping my Jewish identity.

But if we do not speak up, then who is to keep things this way for the future?