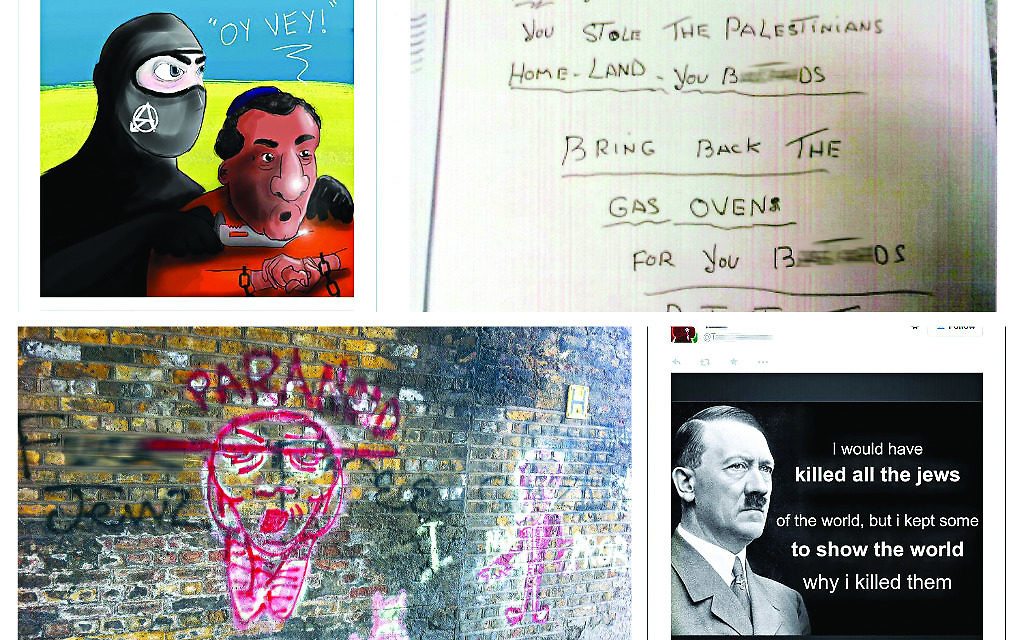 A 53 percent rise in anti-Semitic incidents has been recorded by the Community Security Trust in the first half of this year – but leaders said the figures are partly down to better reporting rather than a marked increase in hatred.

A total of 473 incidents were recorded in the six months to June, following terrorist attacks in Paris and Copenhagen, with January the sixth highest monthly total on record.

A report published today shows one in five incidents were of anti-Semitic material or comments posted online, predominantly on social media sites, such as Twitter and Facebook.

However, there were 44 violent assaults, double the amount from the same period last year, and of these, two were classed as ‘extreme violence’, meaning grievous bodily harm or a threat to life .

“We welcome the apparent increase in reporting, but regret the concern and anxiety about anti-Semitism that this reflects,” said CST chief executive David Delew.

“The terrorist attacks on European Jews earlier this year were a difficult and unsettling experience for our community.”

Communities Minister Baroness Williams of Trafford said: “Anti-Semitism and hate crimes of any sort are not only vile, wrong and totally unacceptable in our society, but they are also an affront to the British values we hold dear… It is positive that members of the Jewish community now feel more able to speak out against these pernicious crimes knowing their government will hear their voice and act decisively to protect them.”

There were 353 incidents of ‘abusive behaviour,’ including graffiti, hate mail, verbal abuse and incidents related to social media.

Reflecting on the high levels of coverage about anti-Semitism in the national media in the wake of the atrocities on the continent, the report said: “…There was a gradual rise after the attack on the kosher supermarket, which was maintained throughout February and tailed off in March.

“The gradual rise is more likely therefore to be an indirect response to the heightened media focus on anti-Semitism, rather than being fuelled by anti-Semitic reactions to the terrorist attacks.” Half the incidents this year have been cases of verbal abuse, often shouted from a passing car and directed at Jews wearing religious or traditional clothing, Jewish school uniforms or jewellery.

“This is the most common single type of anti-Semitic incident: random, spontaneous, verbal abuse, directed at people who look Jewish, while they go about their business,” said a spokesman.

Three quarters of all incidents occurred in London and Manchester.

In the capital, Barnet saw the worst numbers, with 78 incidents, while there were 23 in Camden, 13 in Westminster and 11 in Haringey.

Overall numbers have swelled after internet users increased their reporting of anti-Semitic content, but this nevertheless is a drop in the online ocean, according to a CST spokesman, who said: “The number of incidents reported … reflects the reality that social media platforms have become increasingly prominent arenas for public expressions of anti-Semitism, and that Jewish people are more likely to view it and to report it, even if they are not the intended audience.”