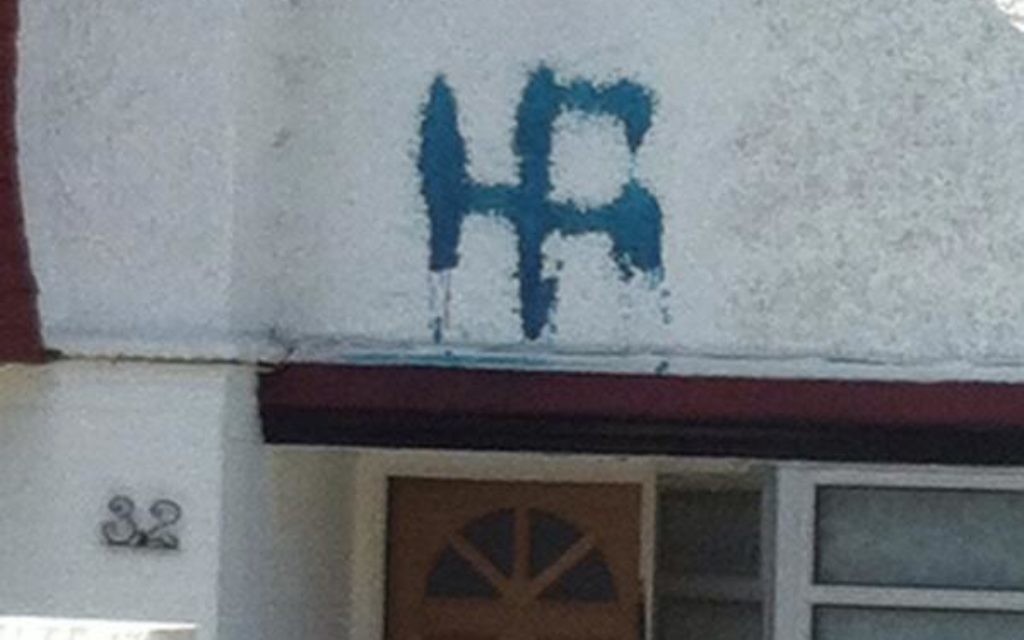 A swastika daubed on a house in Hendon recently.

A total of 47 anti- Semitic incidents have been reported in the UK over the past two weeks as British Jewry faces amid the first signs of an anti-Semitic backlash to the Middle East crisis.

A swastika daubed on a house in Hendon

The Community Security Trust said the number since the start of the month compared to 58 for the whole of July 2013 and represented “almost double what would be expected”.

While the organisation said some of the incidents are yet to be fully analysed, its blog reported that around 30 appear to be directly linked to the conflict between Israel and Hamas.

The “overwhelming majority” of those involve verbal or written abuse or threats, face to face or in phone calls, graffiti, email or online.

It’s not yet known whether the daubing of a swastika on a property in Shirehall Park, Hendon – discovered on Monday morning – is connected to Israel’s operation to halt rocket fire from Gaza. The CST said it’s “especially concerned by incidents in which people attending pro-Palestinian demonstrations have turned anti-Semitic”.

The blog said: “In Manchester on 12 July, after a pro-Palestinian rally that included a “Drive for Justice” to the BBC, a group of four of five cars with occupants of south Asian ethnic appearance passed through the Jewish neighbourhood of Broughton Park.

“Similarly, that same day in Glasgow on the fringes of a demonstration, a man of south Asian appearance was heard shouting “f**king kill the Jews”.

Community security chiefs said so far incidents in the UK “pale in comparison” to events in France where a Jewish-owned shop was ransacked and a shul was firebombed. Scores of congregants had to be rescued after a mob broke off from a pro-Palestinian demonstration and attacked another shul.

The blog said: “Here in Britain, the situation is less severe, but remains highly volatile. It is understandable that Jews, Muslims and others have strong opinions about the conflict.

“Nevertheless, it is neither inevitable nor excusable for people to express their strong feelings by attacking Jews or by using antisemitic language. We call on all people, from all communities and authorities, to use their influence to put a stop to this growing escalation before it becomes even more threatening.”