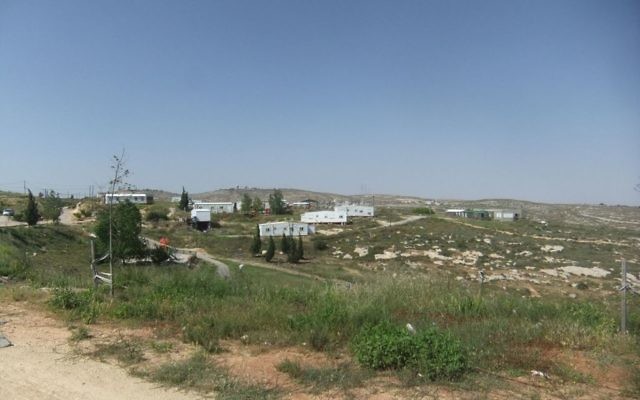 Israel’s Supreme Court issued a temporary injunction on the relocation of the residents of the Amona outpost in the West Bank following Palestinian claims to the property.

The order was issued Monday. Palestinians filed claims with the court over parts of the site.

Last month, the court ordered the outpost evacuated by Feb. 8 after the residents agreed to a peaceful evacuation following a deal that would build 24 homes on the same hilltop where they live and assist the other 16 families in finding homes nearby.

Amona residents said Sunday that they would again protest their eviction, and called on their supporters to do so as well, saying the state and the court had reneged on the agreement.

“Bennett, Netanyahu: We, the residents of Amona, feel that you have deceived us and the entire community, particularly the right-wing and the nationalist camp,” they wrote, referring to the head of the pro-settler Jewish Home party and Israel’s prime minister. “We tell you bluntly that we feel we have been deceived, or even betrayed, and we hold you personally responsible for this situation, for this farce.

“As things stand, we have no option but to renew the public struggle in full force and to call on our thousands of supporters to come quickly to Amona, to do everything we can to prevent the expected evacuation.”

They called on the prime minister to allow the Regulation Bill retroactively legalising outposts including Amona, saying it was the only way to prevent a full-scale evacuation.

Israel’s Supreme Court has ruled that Amona is an illegal settlement built on appropriated Palestinian land. At least three demolition orders have been issued since 1997.

In 2006, a confrontation between settlers and police forces attempting to evacuate them turned violent, leaving many injured. The February demolition was postponed from Dec. 25 to give the state time to provide new housing for the residents.