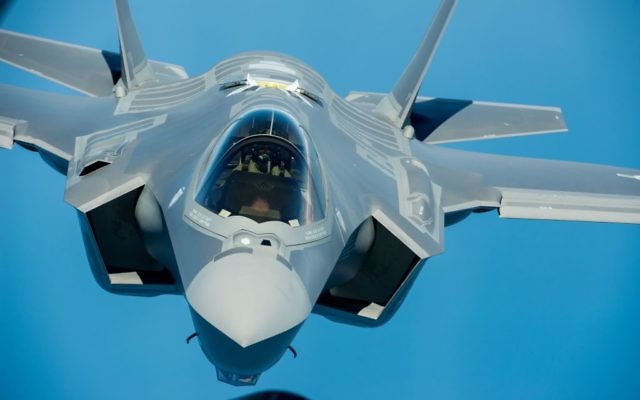 Two F-35 stealth fighter jets have touched down in Israel for a handover ceremony from American to Israeli pilots.

The planes arrived five hours late for the ceremony on Monday after being delayed in Italy due to fog.

U.S. Secretary of Defence Ash Carter was in Israel for the arrival of the airplanes. Earlier in the day, Carter met in Tel Aviv with his Israeli counterpart, Avigdor Liberman, and they “discussed the depth and strength of the U.S.-Israeli relationship and reflected on the unprecedented defence cooperation between our two countries over the last eight years — including robust developments on missile defence, counter-tunneling, cyber security and intelligence sharing,” according to the U.S. Department of Defence.

Carter and Liberman also discussed “regional security challenges in the Middle East,” as well as the campaign to defeat the Islamic State terrorist group.

“Both sides reaffirmed their commitment to the U.S.- Israeli defence relationship and the United States’ unwavering commitment to Israel’s security in the future,” the Department of Defence said.

“It’s a sign of your personal commitment to Israel’s security on many fronts,” Netanyahu said, adding: “And I wish to thank as well, along with all the people of Israel, President Obama. Israel is your best and most reliable ally in the Middle East — in my opinion beyond the Middle East. We will always remain so. Thank you, Secretary Carter.”

Following the handover, Netanyahu and Israeli President Reuven Rivlin, along with Israeli military officials, affixed the symbol of the Israel Air Force on the planes, which are known in Israel by the moniker “Adir,” or Mighty.

Each plane costs about $100million. An additional six planes will arrive in the coming year.

Last month, Israel ordered 17 more of the advanced aircraft under the 10-year, $38billion U.S. military aid package for Israel signed by Obama in September. Most of the aid must be spent in the United States. The F-35 is built by Lockheed-Martin. [JTA]