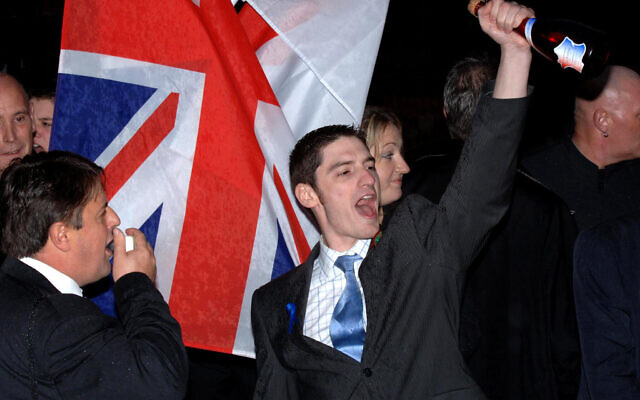 Amazon is profiting from the sales of a book written by the leader of a far-right group, which includes the claim that white people are “pushed” to feel guilt over the “alleged extermination of six million Jews.”

The Fall of the Western Man, written by Patriotic Alternative leader Mark Collett, is being sold for between £15-£20 by the tech company.

During its 324-pages Collett’s book states that Hitler’s Nuremberg rallies were “something that one would have been proud to be part of.”

Elsewhere in the book he suggests the “established Holocaust narrative” has been made an “almost unquestionable truth.”

Amazon has claimed it bans material that is deemed to be offensive on the grounds of race and sexual orientation – and that it will not promote individuals found guilt of violence.

But Collett’s book appears in the political science category on Amazon’s website, an investigation published by The Times revealed.

Under the terms and conditions Amazon keeps at least 30 percent of royalties. Meanwhile, projections show that writers give up 85 percent of the books sale price.

The Fall of the Western Man has nearly 150 reviews on Amazon, with two-thirds giving it four or five star ratings.

Amazon listing for the book

The Times revealed on Saturday how Collett, 41, was caught on camera practising martial art fighting with a former terrorist group member, jailed for antisemitic abuse.

Garron Helm was filmed with Collett in an undercover film made looked at the rise of the now banned National Action group.

Helm was jailed after tweeting a photo of the former Labour MP Luciana Berger calling her a “communist Jewess” and using the hashtag Hitler Was Right.

Collett and Helm were filmed practising boxing and other fighting techniques at a training camp in the Peak District.

Previously leader of the youth wing of the British National Party, Collett’s more recent Patriotic Alternative is estimated to now have 15, 000 supporters in the UK.

The group has successfully used the internet to recruit younger members to their far-right manifesto.

The Community Security Trust has said the group regularly promotes and incites the most vile racism and antisemitism.”

Lord Blunkett, the former home secretary, has warned that a substantial amount of MI5’s work is “now addressing the threat of far-right groups.”

Yvette Cooper, chair of the home affairs select committee, called for the government to outline a plan to tackle racist groups and to take proper action against hateful extremism.

Last week the Conservatives suspended a council in Worthing pending an investigation into claims he was posting messages in support of Patriotic Alternative.

Commenting on The Times report into the sale of Collett’s book Amazon said: “As a bookseller we believe that providing access to written speech is important, including books that some may find objectionable.

“We have policies that outline what products may be sold in our stores and we invest significant time and resources to ensure our content guidelines are followed. We remove products that do not adhere to our guidelines.”

The company said it was incorrect to suggest they kept 85 percent of the sale price, pointing to printing costs.

Karen Pollock, Chief Executive, Holocaust Educational Trust, called on the online retail giant to take action: “We have said it before and we’ll say it again – Holocaust denial and antisemitism should not be for sale on Amazon.”