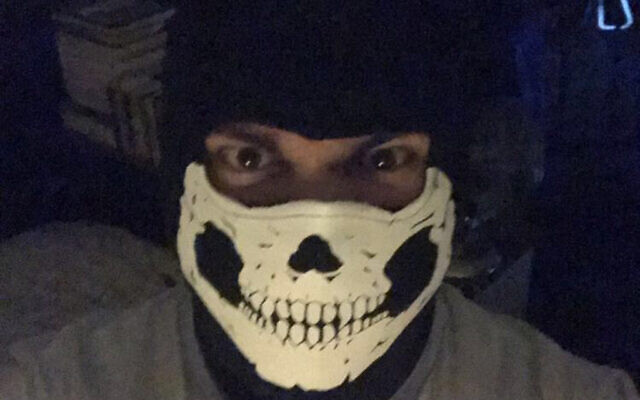 Handout photo issued by Counter Terrorism Policing North East of an image of a person wearing a skull mask which was sent via an electronic device used by Andrew Dymock, and which has been exhibited in his right-wing extremism trial at the Old Bailey in London. Dymock, 23, from Bath, is alleged to have promoted the extreme-right System Resistance Network (SRN) group through his Twitter account and website.

An alleged neo-Nazi student told his mother that Adolf Hitler was the “greatest feminist” in response to a chat on Mumsnet, a court has heard.

Andrew Dymock, 23, exchanged emails with his mother Stella around the time he was allegedly promoting extremist right-wing group System Resistance Network (SRN) via Twitter and a website.

The defendant, who lived with his parents in Bath, Somerset, has denied a string of terror offences, claiming he was set up.

It included an email exchange between Dymock and his mother in December 2017.

On December 9, Mrs Dymock sent a message with the subject “Alt-right and feminists”, jurors heard.

In it, she wrote that she had been following some threads on Mumsnet and it seemed like some feminists were appropriating alt-right viewpoints, the court heard.

Mrs Dymock allegedly asked her son if he agreed or could explain it.

Dymock replied, describing the alt-right as being “anti-Islam and anti-Semitic”.

He went on: “The only true form of feminism is found within the fascist worldview.

“I honestly believe that Hitler was the greatest feminist of all time.”

The email included a web link to a speech said to be made by Hitler to the National Socialist Women’s League in 1934.

Jurors heard Mrs Dymock also quizzed the defendant on “Trump and Jerusalem”, asking his opinion on Jerusalem going back to the Israelis, signing off: “Love Mum”.

The defendant allegedly explained why he thought it was a fantastic thing to happen and would “spark a war between Hezbollah and Israel”.

Another video showed a male sticking a poster bearing a swastika onto the face of a large public clock.

Audio files were played in court of a male singing offensive lyrics to popular Christmas songs.

A version of Jingle Bell Rock contained the words: “Genocide round the clock”, and a song based on Santa Baby referred to a “racial holy war”.

The trial at the Old Bailey was adjourned until Thursday morning.