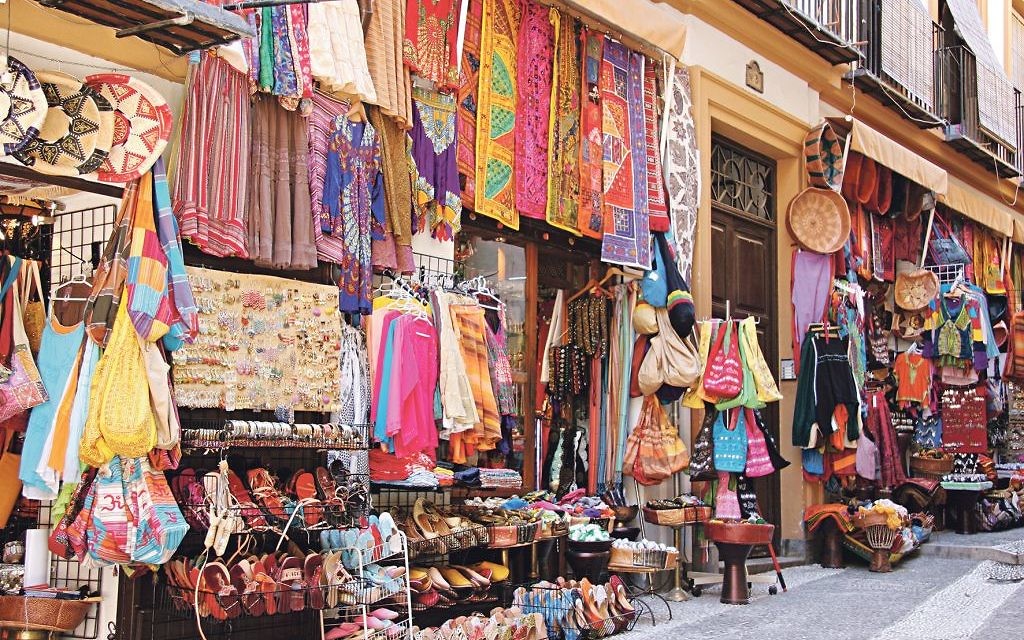 A shuk - or market - in Marrakesh

You would be hard pushed to find a destination more unexpectedly bewitching than Marrakech.

Whether it’s haggling at hectic souks, dodging snake charmers at the Jemaa el-Fnaa Square or spotting the Atlas Mountains from the comfort of your bedroom, Marrakech is the place to go for it all: history, culture, sunshine, and an exciting journey into the unknown.

Only three hours by air from the UK and with no time difference, we began our trip outside of the bustling medina, at the luxurious 134-room Fairmont Royal Palm Marrakech.

Just a 20-minute drive from the city’s frenetic heart, it feels worlds away from the medina’s mayhem. Sitting in the shadow of the Atlas Mountains, it offers a deep sense of calm and aeons of open space in which to relax.

Even the drive down the grand, manicured path to the hotel entrance helps you to forget any worries and focus instead on enjoying the best of Moroccan hospitality.

There’s an enormous Clarins spa, a gym, an 18-hole golf course, a giant swimming pool, and six restaurants and bars. Olive trees line the property’s paths, and are used to make the resort’s olive oil. Pools sited across the grounds, from which palm trees tower, and lush greenery, including bougainvillea, date trees and cacti, add to the sense of tranquillity. 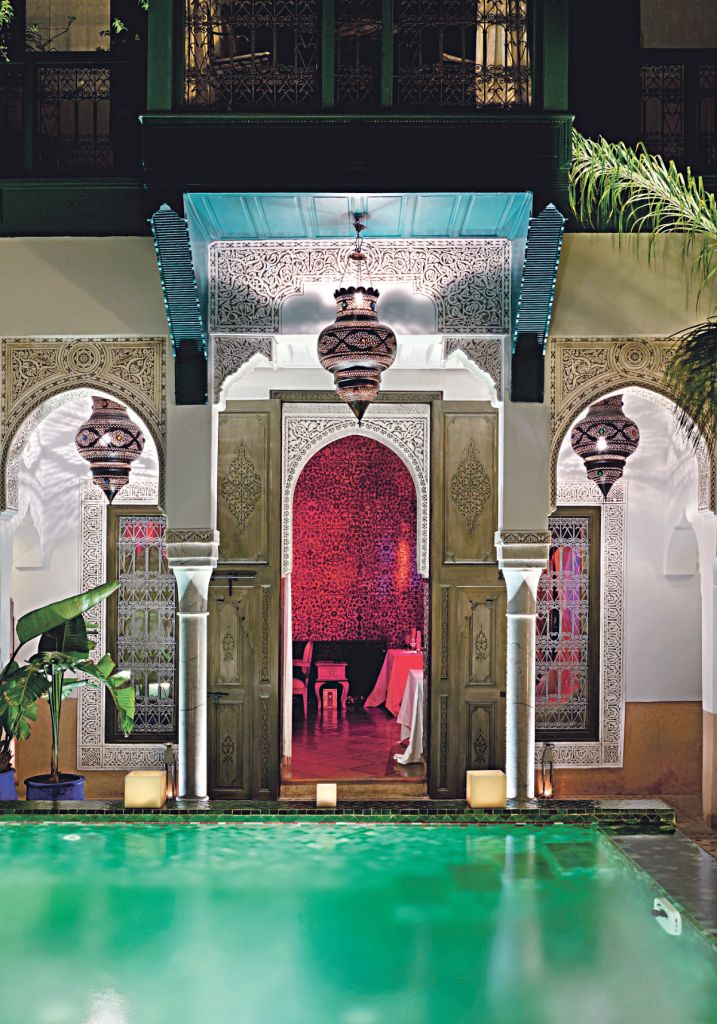 The whole family will love it. The kids’ club has an indoor treehouse, a children’s pool and activities including camel-riding and Moroccan cookery classes.

After a few days recovering from the rat race, and enjoying being pampered and eating too much vegetable tagine, we were ready to jump into the city’s more frenzied but no less enjoyable side. We drove into the medina, the old walled part of the city.

Our suitcases were whisked away by a young man in a football shirt, and we followed him on foot through the winding streets: past Marrakech’s oldest mosque, the Ben Youssef Mosque and its neighbouring madrasa, once the largest theological college in North Africa.

We eventually arrived at our next stop: the boutique, 10-bedroom Riad Farnatchi and instantly fell in love. Located within a collection of 400-year-old buildings, the hotel is
a lovingly-restored haven of tranquility.

Composed of several former private homes now joined together, the hotel offers winding staircases and narrow corridors, with plenty of hidden delights: a games room with elegant red velvet furnishings, a tree-filled courtyard,   twinkly lights and cosy alcoves, a roof terrace where you can dine alone joined only by the sound of the pool downstairs and the glow of traditional Moroccan lamps beside you. 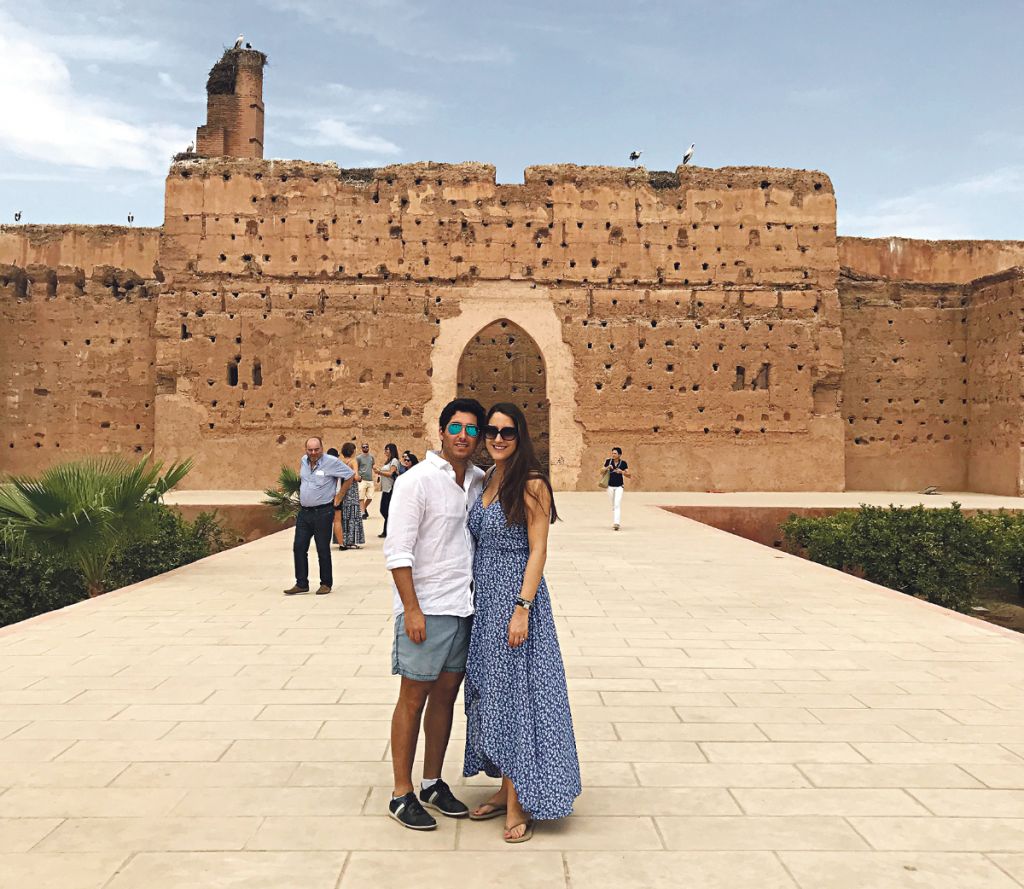 Each of the 10 rooms is different in style and layout. Ours had a mezzanine just for the bed, a balcony and terrace, and an expansive living room with glorious splashes of colour.

The hotel has a stylish restaurant, Le Trou au Mur and a spa, where I enjoyed a sumptuous ‘massage tonique’. Back out in the streets of Marrakech, our greatest pleasure was losing ourselves in the chaos. Haggling for a china teapot only to later find it was full of holes; having to pay a woman for a henna tattoo, despite begging her to stop drawing on my hand; sitting on a rooftop with glasses of mint tea and gazing down at the crowds below.

Of course, the city has much more to offer. The newly-opened Musée Yves Saint Laurent looks at the life and works of the fashion designer, while next door is Le Jardin Majorelle, the sumptuous gardens and villa that once belonged to him and his partner, Pierre Bergé. 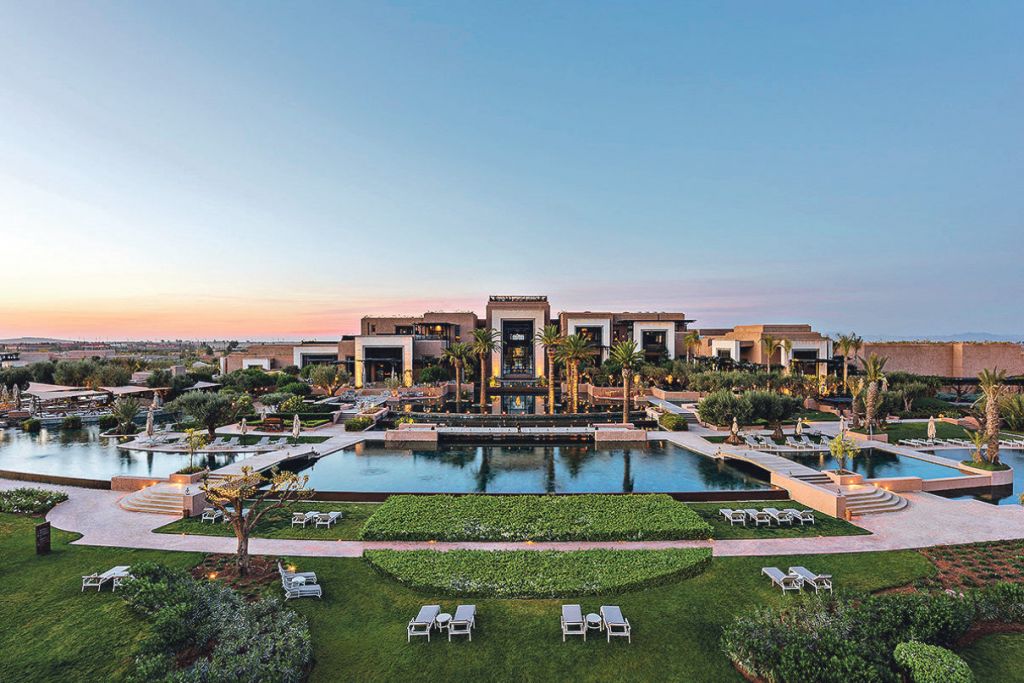 Then there are the cultural landmarks to explore: the ruins of El Badi Palace, the grandeur of Bahia Palace, and the Jewish Quarter.

We wandered through narrow streets with names like Talmud Torah until we found the Jewish cemetery and the Lazama synagogue, the city’s only operational shul, which dates to the 16th century. Although the community is now just 2,500 Jews, rather than the 350,000-strong community that once lived in the city — the large synagogue is intact and impressive. We strolled through the ground floor rooms, taking in a sense of the once-vibrant Jewish life in Morocco.

Although weekend breaks go quickly, the captivating effect of Marrakech endures. Despite it being weeks since we returned to the UK, we are still under its spell. In fact, our next trip has already been booked.

Deborah stayed at Fairmont Royal Palm Marrakech (fairmont.com/Marrakech) where a deluxe room costs from £225 per night on a room-only basis. She also stayed at Riad Farnatchi (riadfarnatchi.com), where rooms start from £240 per night inclusive of breakfast.