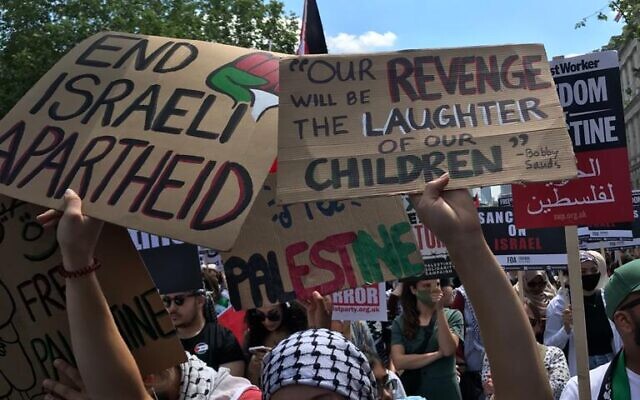 A placard quotes the words of IRA terrorist Bobby Sands who said that Ireland's revenge on the UK will be the "laughter of our children". 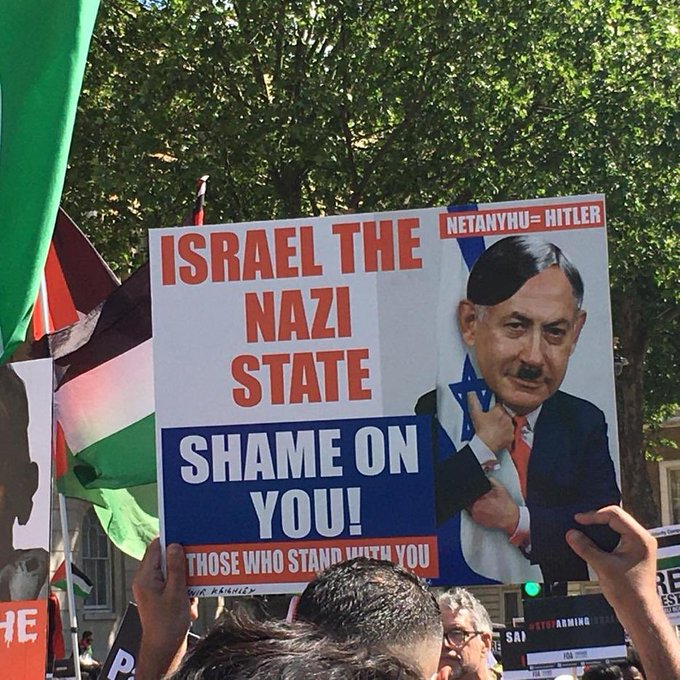 Jeremy Corbyn and John McDonnell have both spoken at a demonstration organised by the anti-Israel Friends of Al Aqsa group at which openly antisemitic placards were held aloft from the crowd.

After the former Labour leader and the ex-shadow chancellor addressed those attending the demo in Whitehall, central London, a banner raised by one protester read:”Israel The Nazi State” and added:”Netanyahu = Hitler”

Meanwhile a female attendee displayed her own self-made placard which stated: “It Wasn’t Ok In South Africa It Wasn’t Ok In Nazi Germany  So Why Is It Ok in Palestine (It’s Not!).

When challenged by Jewish News on how she could make the comparison between Israel and Hitler’s Germany the protester suggested it could be justified because of “Jewish supremacy” and “apartheid.” 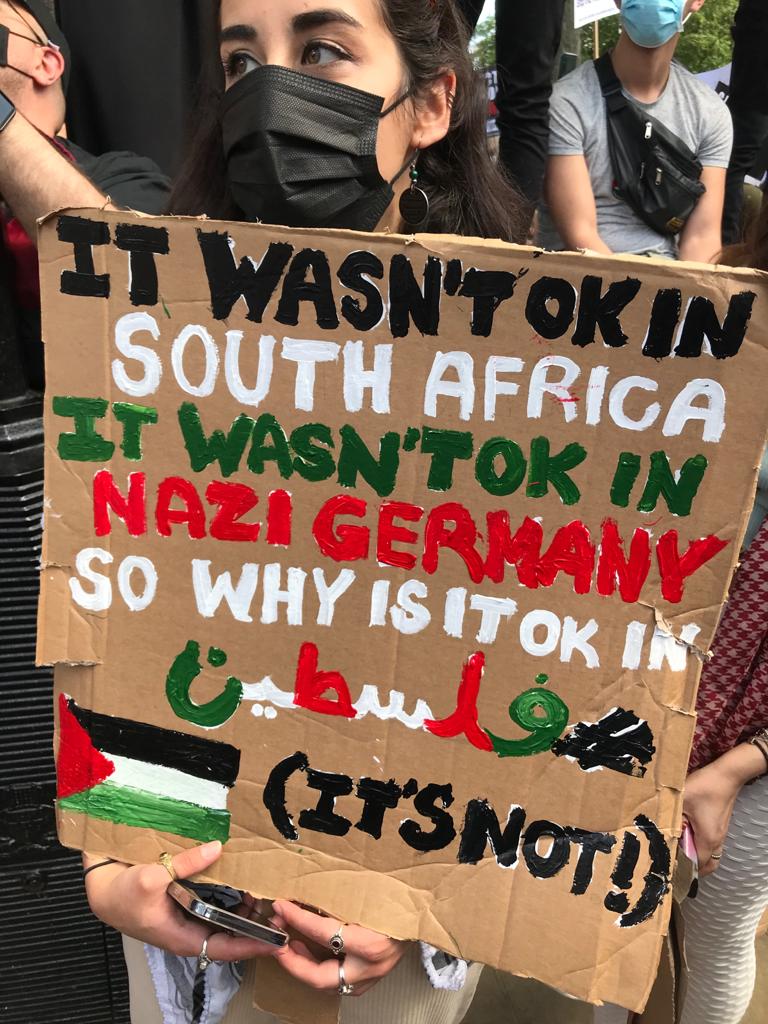 A placard at the pro-Palestinian demo near Downing Street on Saturday afternoon. Photo: Lee Harpin/Jewish News

Asked if she believed there could be a two-state solution to the conflict between Israel and the Palestinians the female protesters said “no.”

She also denied Hamas were a terrorist organisation.

Delivering his speech at Saturday’s demo Labour’s McDonnell drew cheers from around 2,000 people who attended as he blasted the “apartheid regime of Israel”.

Meanwhile Corbyn – who faces an investigation by Labour into his remarks about Luciana Berger at the Cambridge Union – used his speech to say “we are here to support the Palestinian people whether we are Jewish, Hindu, Muslim or Christian, or no faith.” 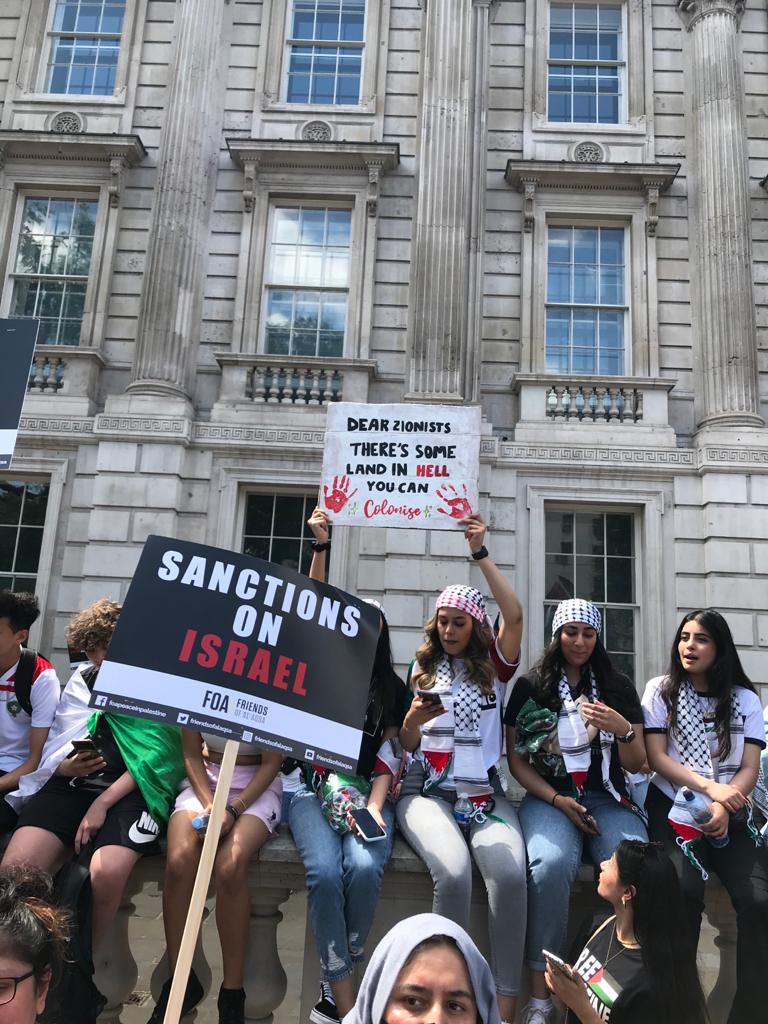 Corbyn also claimed “world opinion” had been changed on the issue as a result of the recent anti-Israel demos during last month’s 11-day long conflict with Hamas, that left hundreds dead.

Elsewhere on the demo, the same inflatable image of an Arab prince complete with horns and a pointy nose was to be spotted, that had been present at previous anti-Israel demos in London. 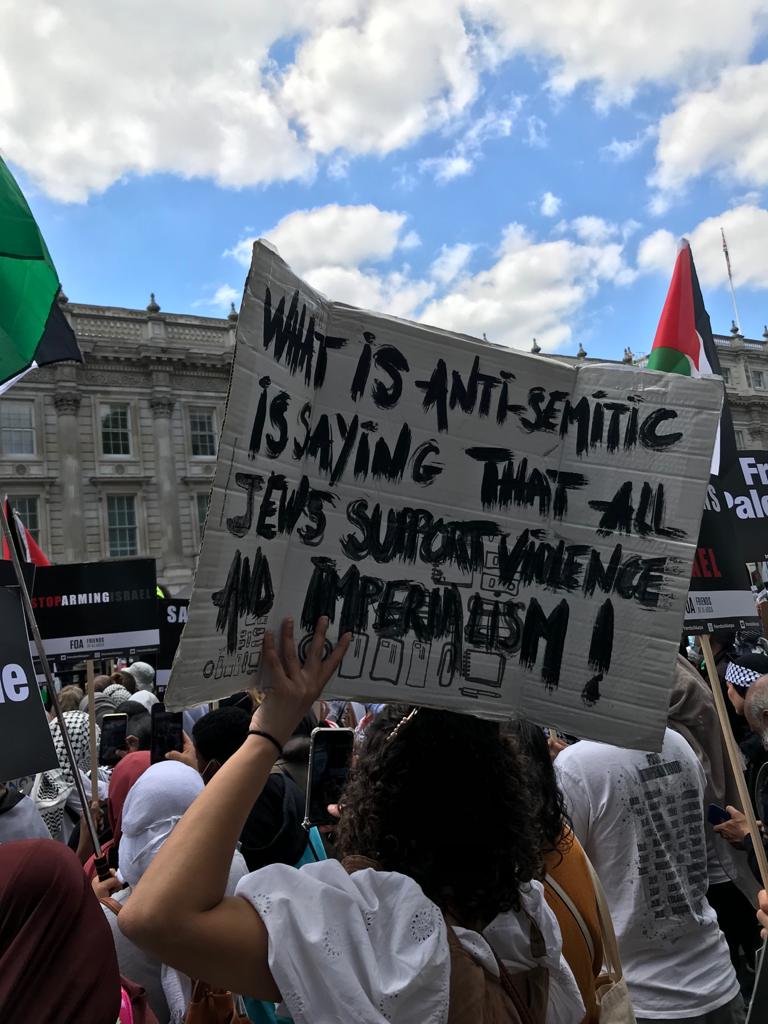 A woman holds a placard stating: ‘What is antisemitic is saying that Jews support violence and imperialism’ Photo: Lee Harpin/Jewish News

Suggestions that the inflatable is an antisemitic reference to Jews have been denied with others concluded the blow-up prop is a caricature of Sheikh Mohamed bin Zayed Al Nahyan, the crown prince of Abu Dhabi, capital of the United Arab Emirates, one of several Arab nations to establish diplomatic relations with Israel last year.

Other banners seen at the demo included one which read: “Dear Zionists There is some land in HELL you can colonise.”

Another protester held up a placard featuring a quote from Bobby Sands, the IRA hunger striker who died in prison.

Protesters regularly chanted the now familiar “From the river to the sea – Palestine will be free” chant along with “Israel is a terrorist state” and “We are all Palestinians.”

Another banner held aloft by a female at the protest stated confusingly: “What Is Antisemitic Is Saying That All Jews Support Violence And Imperialism.”

The Camden Momentum branch also were in attendance holding aloft a pro-Corbyn banner.

Friends of Al Aqsa organised the Justice for Palestine demo outside Downing Street to coincide with the G7 summit in Cornwall. 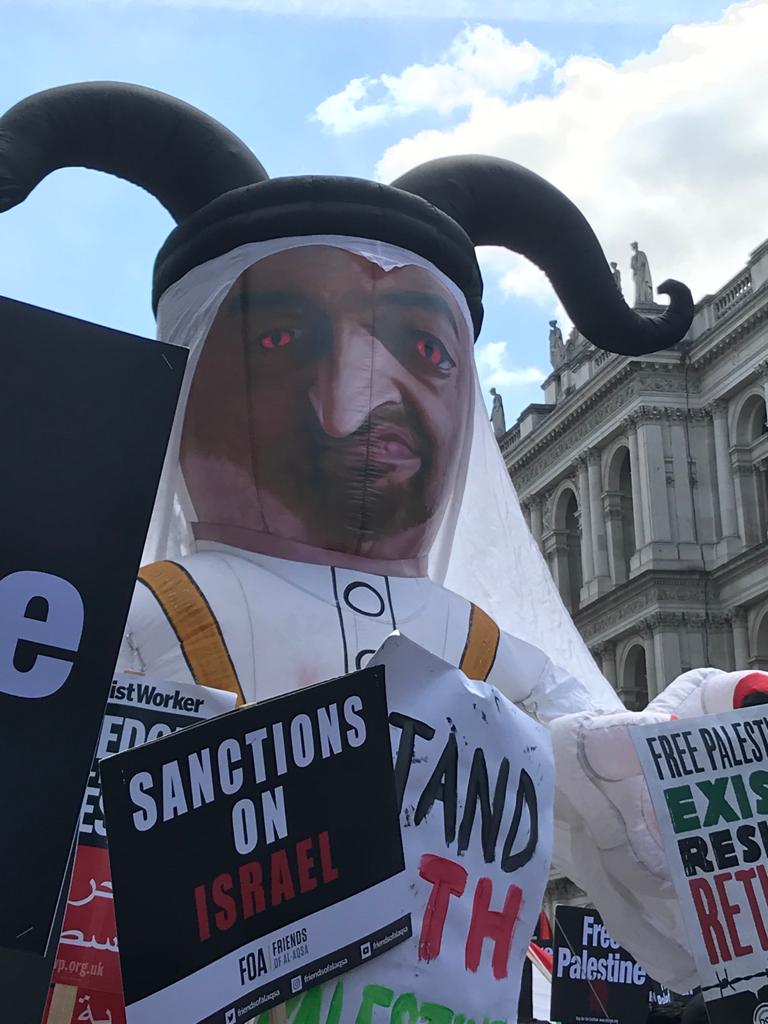 An inflatable image of an Arab prince complete with horns and a pointy nose. Photo: Lee Harpin/Jewish News