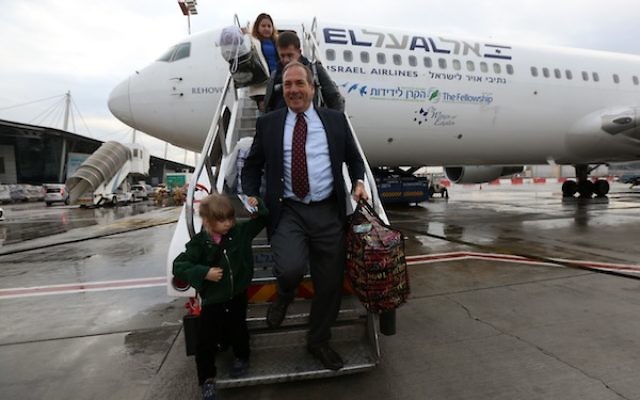 Bucking a noticeable decrease in Jewish immigration to Israel this year, the number of Russian Jews who moved to the Jewish state has reached a 10-year record of 7,000 newcomers.

Overall, some 27,000 people moved to Israel this year under its Law of Return for Jews and their relatives, or made aliyah, according to the Jewish Agency for Israel, compared to 31,000 last year. This constitutes a 13-percent drop in aliyah overall.

Aliyah from France, which in 2014 and 2015 was Israel’s largest single provider of immigrants with 6,658 and 7,468 newcomers respectively, decreased considerably, according to preliminary statistics provided by the Ministry for Immigrant Absorption and by the Jewish Agency.

During the first 10 months of 2016, Israel saw the arrival of 4,214 French Jews and their relatives compared to 6,928 during the corresponding period in 2015, constituting a 39-percent decrease over that period. In October this year, Israel saw 176 olim from France compared to 609 last year.

The decrease in aliyah from France reflects “a slightly improved feeling of security” by French Jews due to government efforts to curb attacks on Jewish targets by Islamists, Jewish Agency Chairman Natan Sharansky told JTA earlier this year.

Eight people were murdered in two such attacks in France since 2012 and another four were killed in a 2014 shooting in Belgium, which French and Belgian prosecutors attribute to a France-born Islamist who is currently on trial in Brussels.

In Ukraine, the decrease in aliyah is attributable to increased stability following a bloody revolution in 2014, that has led to clashes between Ukrainian troops, separatists and Russian soldiers in a conflict that has contributed to the halving of the value of both countries’ currencies against the dollar, Sharansky said.

The effects of this financial crisis in Russia, along with some concerns over Russian President Vladimir Putin’s authoritarianism, are also driving up aliyah from Russia, Sharansky has said.

“In Russia there’s a serious increase from Moscow and St. Petersburg that we haven’t seen in the past, and that’s mainly businessmen, intelligentsia, people who are afraid to find themselves closed off from the free world,” Sharansky told JTA in 2015. That year, 6,716 Russian olim came – a tally that was the highest on record for at least a decade before it was surpassed this year, in which Russia replaced France as the single largest provider of olim.

In relative terms, dramatic increases in aliyah occurred in Brazil, where a financial crisis and political instability have severely stunted growth, driving up aliyah by 52-percent from 497 last year to 760 this one.

Aliyah almost doubled this year from Turkey, where a wave of terrorist attacks and a failed coup attempt in July have led to clampdowns on civil liberties by the country’s authoritarian president Recep Tayyip Erdoğan. some critics accuse him of encouraging anti-Semitic sentiment in Turkey. Whereas in the first 10 months of 2015 only 93 olim came from Turkey, they numbered 181 in the corresponding period this year.

“Despite the downward shift this year, we see that the long-term trends continue and the number of immigrants to Israel, particularly from Western countries, remains high compared to the averages of the past fifteen years,” Sharansky said in a statement on Thursday. “This is evidence of the fact that Israel continues to draw Jews from around the world seeking to live lives of meaning and identity.”