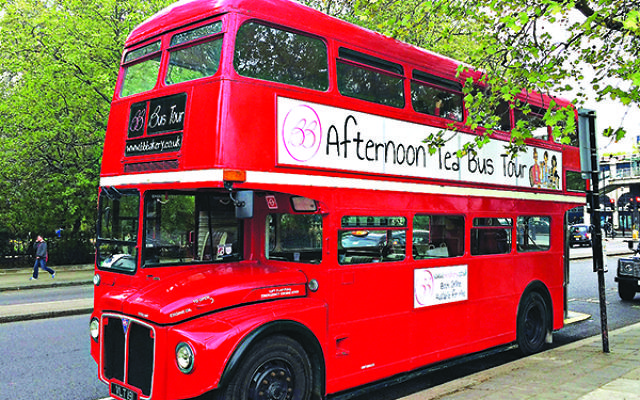 Afternoon tea is a very British institution, but how many of us know that tea shops owned by Jews Joseph Nathaniel Lyons and his brothers-in-law, Isidore and Montague Gluckstein formed part of this very tradition?

Stumbling across the archives of J Lyons, historian Susan Cohen, author of London’s Afternoon Teas: A Guide To The Best Of London’s Exquisite Tea Venues, Including Recipes became interested in the quintessentially English experience.

“A good tea is about ambience, service and the food should be fresh and appealing,” says Cohen.  Armed with that knowledge, we set off to four of London’s top outdoor tea places. 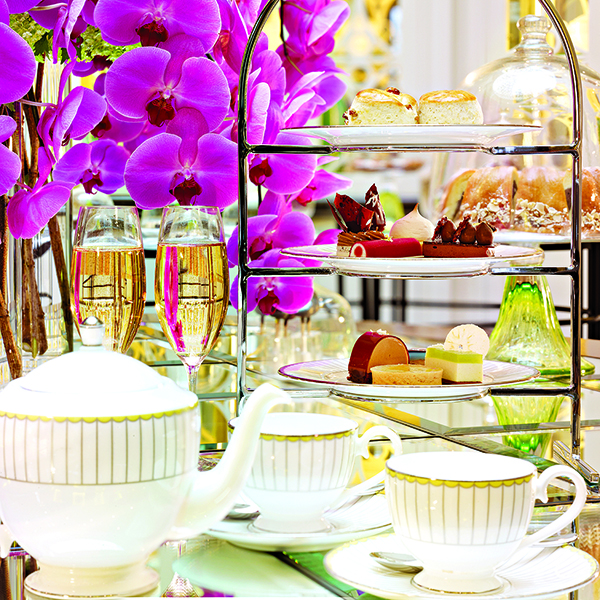 Setting and atmosphere: A beautiful venue, with a relaxed yet upmarket feel and staff who offer impeccable service. The airy surrounds, exquisite fresh flowers and the ‘Full Moon’ Baccarat crystal chandelier lend a sophisticated air to the five-star Victorian building, as does the bespoke art deco bone china – created by William Edwards – which makes taking tea even more special.

Most unusual type of tea: There are so many wonderful teas to choose from, including the Dragon Well Tea, which I chose, that is described as a sweet and creamy green tea wth a hint of fruit. ‘A wonderful emerald experience, named after the light rainfall onto a swirling well that resembles a dancing Chinese dragon’. There is also a white tea called Wedding Tea, with pink rosebuds, vanilla and a hint of lemon, which is said to inspire long lasting happiness, and the Winston Churchill Blend of historical tea – a Lapsang imperial.

Tastiest sandwich: The sandwiches are made from artisanal bread and I particularly liked the Loch Var smoked salmon, cream cheese and chive and the Severn and Wye smoked trout and cucumber. However, we declined a refill as we knew the ‘English tea fancies’ (with their unusual names, such as ‘The Writer’s – moist lemon sponge with lemon buttercream) would be good. They did not disappoint and included two scones each, still warm from the oven, served with clotted cream and jam, a generous sized chocolate macaroon filled with vanilla mousseline and cherry compote, Yorkshire rhubarb compote with Chantilly cream and crisp meringues…

Best table in the house: The two by the fireplaces outside in the Garden Lounge, an enclosed space just off the main lobby lounge area, or the ones inside with sofa seating near to the Baccarat chandelier, particularly the table next to the butterflies cut from London maps.

Fascinating fact: The building dates from 1885 and was originally the Metropolitan Hotel before becoming the Ministry of Defence building. Former MoD employees still come in and tell hotel staff on which floor they used to work. 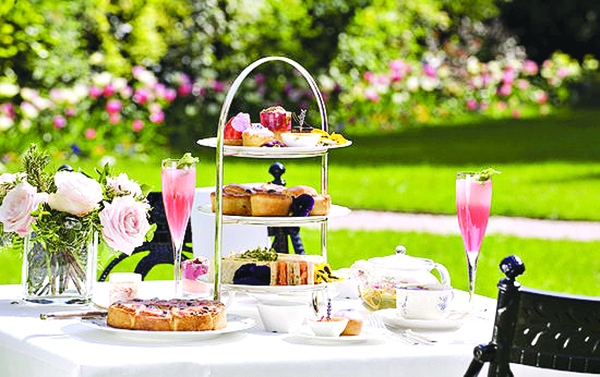 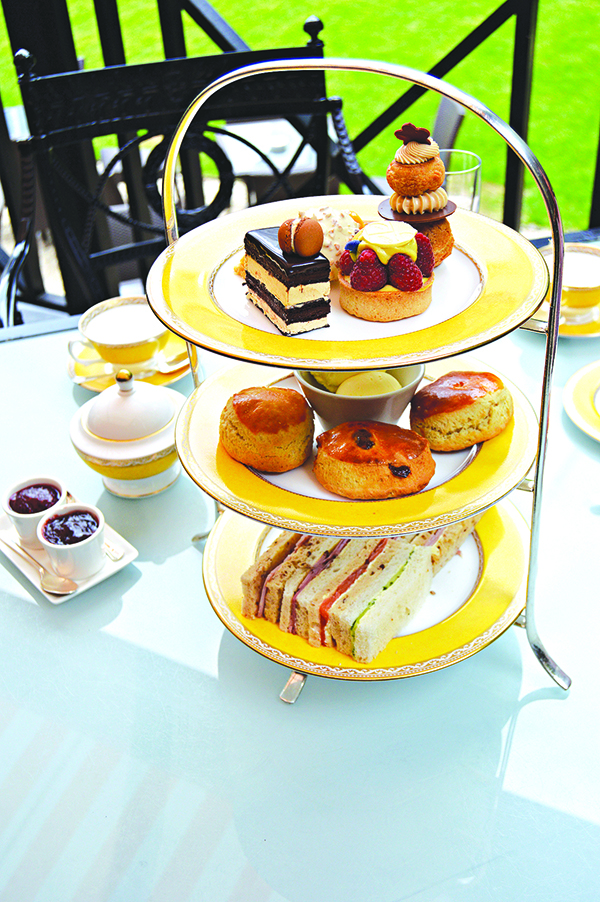 Name of venue: The Goring

Setting and atmosphere: Quintessentially British and very elegant, top drawer but not stuffy. The service is faultless, delivered by delightfully friendly staff who are always on hand to top up your tea cup or bring more sandwiches.

Most unusual type of tea: Dragon Well (Longjing). ‘Picked once a year before the Quing Ming Lunar festival in Zhejiang, the site of the original Dragon Well. This tea has a grassy freshness, underscored by subtle liquorice root complexity and body.’ I drank two pots of it by myself!

Tastiest sandwich: The sandwiches are probably the least exciting part of the tea, whereas the scones and cakes were amazing. The most interesting part was the ‘Savoury’ – a shot glass of cauliflower cheese mousse with spicy rice crispies, which was served at the beginning.

Best table in the house: Any one of the six tables outside on the veranda in the summer or inside in the Terrace, or Yellow Room as it is also known, when the weather is not so good.

Fascinating fact: The Goring is London’s last remaining family-owned luxury hotel and is holder of The British Tea Guild Council’s Top London Afternoon Tea Award. It is the closest hotel to Buckingham Palace and is the only hotel to have been awarded a Royal Warrant for hospitality services. Debra Barnes 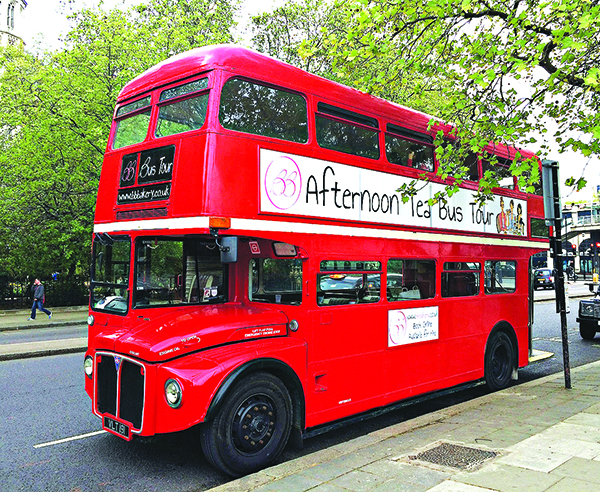 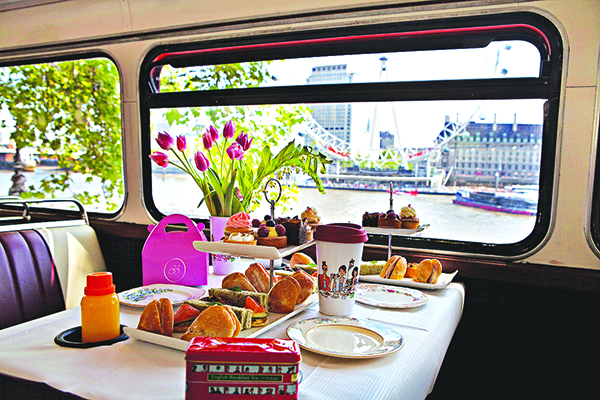 Setting and atmosphere: A truly novel idea, the BB Afternoon Bus Tour is a fun experience with friendly staff. The vintage Routemaster bus weaves its way through the highlights (and smog and traffic) of London and you can see the appeal for tourists and Londoners alike. When we pulled up alongside a ‘regular’ bus, it was amusing to see the faces of those on board as they clocked our tables full of finger sandwiches, mini quiches and French pastries such as macarons (BB Bakery is a traditional French salon de thé). It’s a fantastic experience, but be prepared to grab hold of your drinks to stop them making a beeline for the floor going round a bend. This experience is perhaps not for the carsick and there’s no toilet on the bus, so go before you board (children must six or older)!

Most unusual type of tea: You don’t go on this tour for the tea, but the most unusual here would be the jasmine or rooibos. Orange juice is served in BB branded plastic bottles, you are served your tea in a ceramic travel mug (the lid should remain on for obvious reasons) and staff offer to replenish your tea.

Tastiest sandwich: A French-inspired afternoon tea, there were non-standard options, such as cheese and mushroom quiche and cheese sandwiches with mustard. I liked the blinis with cream cheese and cucumber and loved the lemon meringue tart. The bakery offers gluten free, vegetarian and halal afternoon teas – specify any requirements upon reservation.

Best table in the house: Table 10 or 11 on the top deck at the front of the bus, affording you a great view of London’s landmarks. 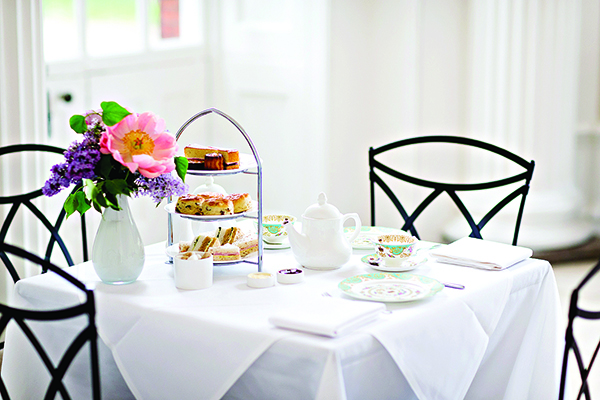 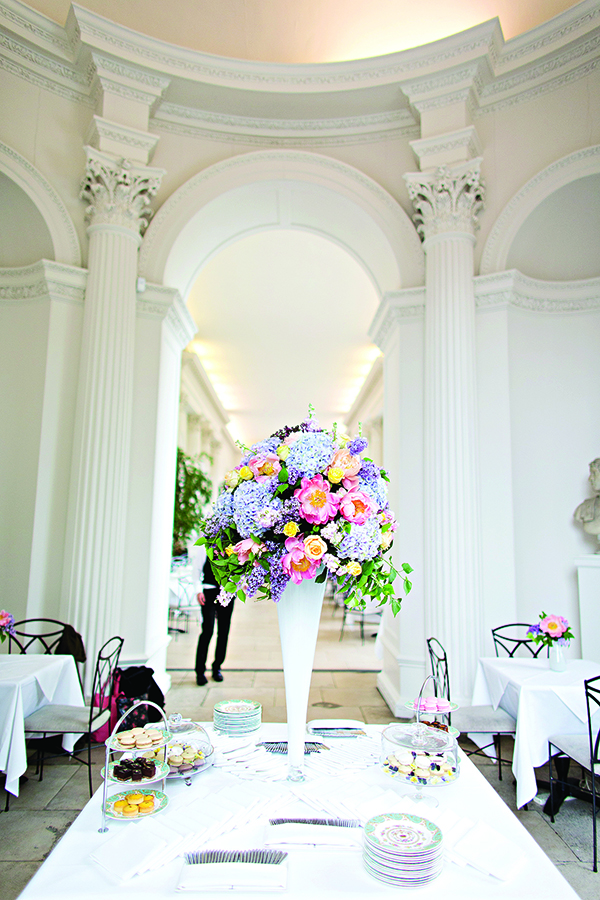 Setting and atmosphere: The Duchess of Bedford Anna Maria Stanhope had a “sinking feeling” every day and realised that breakfast and dinner wasn’t sufficient, so she organised tea and cakes at 4pm. So it’s thanks to the Duchess that I got to have afternoon tea on the terrace of The Orangery overlooking the perfectly manicured gardens through which numerous royals and the late Michael Winner have strolled.

Most unusual type of tea: There were several interesting teas to choose from, but the ‘Afternoon At The Palace Tea’ is a blend of finest single estate Darjeeling and China black tea, which is light and aromatic thus in keeping with the surroundings.

Tastiest sandwich: Being so close to Kensington Palace, one assumes The Orangery knows what a princess likes for tea and the mint and cucumber sandwiches are delicious. Thumbs up, too, for the mini bagels with egg and cress, smoked salmon with cream cheese and the coronation chicken wraps are as expected. Not exactly Jewish portions, but this is as much as any lady should have for tea once you tuck into an array of cakes and scones, of which the lemon posset and a chocolate mousse are the highlights. For liquid accompaniment, you can choose from a glass of Pimms, a Rose Merlot Spumante or a glass of Laurent Perrier Brut champagne.

Best table in the house: Sipping any of the above at a table on the veranda, preferably in the sunshine and being attended to by Joe, the maitre d’. A delightful afternoon for anyone who wants to feel like a princess.

Fascinating fact: The Orangery was built in 1704-5 for Mary’s younger sister, Anne.