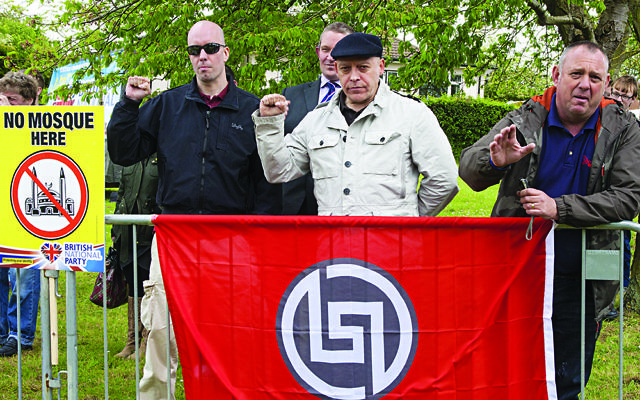 Academics and anti-fascist campaigners have told an influential committee of MPs that today’s far-right groups as likely to love Jews and Israel as they are to hate them.

Addressing the Home Affairs Select Committee’s Inquiry into Hate Crime and its Violent Consequences, experts said many from the far-right now thought of themselves as “Judeophilic

Professor Matthew Feldman from the Centre for Fascist, Anti-Fascist and Post-Fascist Studies at Teesside University said today’s range of far-right groups believed in different things, with the only common denominator being a hatred of Muslims.

Professor Matthew Goodwin of Chatham House and the University of Kent noted the “collapse of the traditional extreme right in Britain,” arguing that it had been “largely replaced by a more fragmented landscape of very small but more confrontational organisations” which were less interested in votes and elections, and more interested in demonstrations and spreading ideology online”.

Asked by Naz Shah MP whether anti-Semitism was still “an integral strand of the far-right today,” Goodwin said it depends. “Classic neo-Nazi type groups like National Action, which was recently proscribed… that is unequivocally anti-Semitic, anti-Muslim and pretty much anti every group it does not consider white British”.

However, he said: “If you look at other organisations, such as the defence leagues or some of their offshoots, you see that they have, whether strategically or sincerely, expressed allegiance with Israel as part of what they see as an alliance against Islam and the perceived threat from Muslim communities.”

Feldman agreed, saying “the difference between the biological or old-fashioned extreme right, and a ‘new right’ which tends to have traffic in cultural stuff, tends to be the issue of Jews and Israel”.

He said: “You find a lot of groups that are perhaps rejecting the neo-Nazism and rejecting the outright extremism actually embracing Israel or calling themselves Judeophilic, whereas their new real enemies, and I think there is some strategy there, are the Muslims.”

Feldman added that anti-Semitism remained a “serious concern for hate crimes,” saying: “It is also a kind of way station for where one might situate oneself in terms of biological, race-based hate crimes and what we might consider religious or ideologically-based attacks”.

Adding comment, Committee member David Winnick MP that “for white extremists post 1945… anti-Semitism has been a hard sell. In so far as there has been any sort of impact on white communities, it has been on those considered to be black or Asian. In the Muslim community… anti-Semitism seems an easier sell. Is that only because of Israel and policies that many of us deplore? I would venture that it is more than that”.