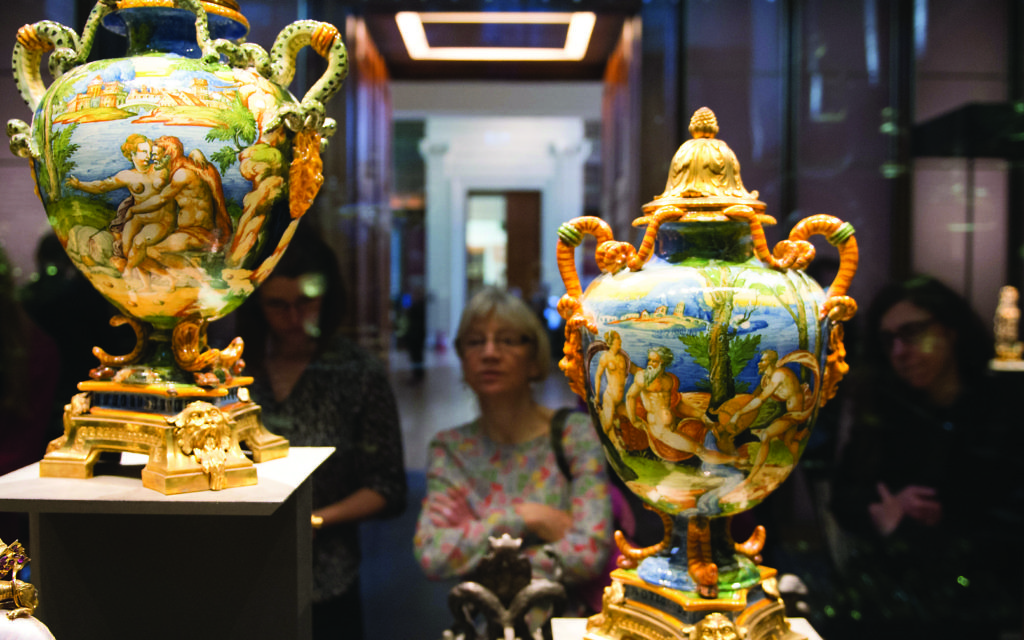 Items forming part of the newly opened permanent exhibition of the Waddesdon Bequest given by Baron Ferdinand de Rothschild in 1898, go on show at the British Museum in London.

Writer and filmmaker Hannah Rothschild will this week become the first female chair of the National Gallery and has just written her debut novel. Rebecca Wallersteiner finds out more…

From the moment she was born into a famous Jewish banking family, Hannah Rothschild was plunged into the world of treasure-filled country estates and old-world masterpieces, giving her a passion for the creative arts that would last a lifetime.

This week, the talented 53-year-old writer and filmmaker will step into the shoes of Mark Getty and become the first woman to chair the National Gallery, one of the most coveted roles in the art world, following in the footsteps of her charismatic father Lord Rothschild, who held the post for six years until 1991.

His daughter was formerly a trustee of the Whitechapel Gallery and the ICA and was the co-founder of the charity Artists on Film.

Of her new role, Rothschild says: “Since I was a child the National Gallery has been one of my favourite places: a playground and refuge as well as a source of solace and inspiration.”

Her remit includes overseeing a collection of more than 2,300 works, including such famous studies as Van Gogh’s Sunflowers and Turner’s Fighting Temeraire.

Since she has an eye for appreciating some of the world’s greatest works, I ask Rothschild if she is looking to expand the collection – perhaps with a masterpiece discovered in an unusual place.

The mother-of-three, who lives in Maida Vale, reveals: “When I was at school, I bought a print of Rembrandt’s mother for just £1 from a junk shop, convinced that it was an original – though it turned out to be just another copy.

“Nevertheless, I still have it and hang it on my wall as a rebuke or a reminder of an unrealised dream. I didn’t learn my lesson and am constantly scouring junk shops and sales catalogues for ‘sleepers’. So far no luck, but I will keep trying.”

As unlikely as it may seem to come across such a great work of art in this way, this tantalising scenario was one that inspired Rothschild’s debut novel, The Improbability of Love, which was published in May. The story opens with Annie McDee, a young cook, coming across a dusty picture in a junk shop which turns out to be a lost masterpiece by the French Rococo painter Jean-Antoine Watteau.

Items forming part of the newly opened permanent exhibition of the Waddesdon Bequest given by Baron Ferdinand de Rothschild in 1898, go on show at the British Museum in London.

I ask Rothschild if her racy novel is based on real people she has met in the art world.

“The characters in my novel are inspired by people I know or have read about. I hope that any resemblances are seen as entirely complimentary,” she answers with a smile.

Her story also draws upon her Jewish heritage, of which she is “extremely proud” and real events from her own family’s experiences of Nazi art plunder during the Second World War. More than 5,000 works were looted from the French branch of her family alone. While many were eventually returned, others remain missing.

Rothschild adds: “At his Nuremberg trial, Goering, with his characteristic narcissistic pomposity informed his interrogators he owned a Memling taken from the Rothschild collection as part of his wife’s ‘nest-egg’. He said that ‘everybody loots a little bit.’”

The eldest daughter of Lord Jacob Rothschild and his wife Serena Dunn, she has always been acutely aware of her privileged family roots.

In his opinion, women were there to be wives and mothers. Perhaps Amschel would be more than a little surprised to hear that two centuries later, his descendant, one of the most gifted members of the present generation of his family, has achieved the coveted role of National Gallery chair.

Somewhat fittingly, the family’s passion for the art world has been further celebrated with the opening of the new Rothschild gallery at the British Museum in June.

“I was closely involved in the competition for an appointment of the architect to redesign the room, Stanton Williams, but the display was the domain of the highly capable curator Dora Thornton,” Rothschild tells me.

Entry is free to the new Rothschild gallery, which shows exquisite historical artworks and jewels gifted to the British Museum by Baron Ferdinand de Rothschild, in 1898.

I ask which is her favourite treasure on display. “The Holy Reliquary is an extraordinary object,” she replies. “It is a bejewelled casket which was made in 1400 to display a thorn which had been detached from the crown allegedly worn by Christ at his crucifixion.

“Trade in holy relics was such a profitable business in medieval Europe that kings would go to war to secure them. “When, for example, Louis IX, King of France bought it in 1239, he paid nearly half the annual expenditure of his country to secure it.”

• The Improbability of Love by Hannah Rothschild, published by Bloomsbury, is available now, priced £14.99