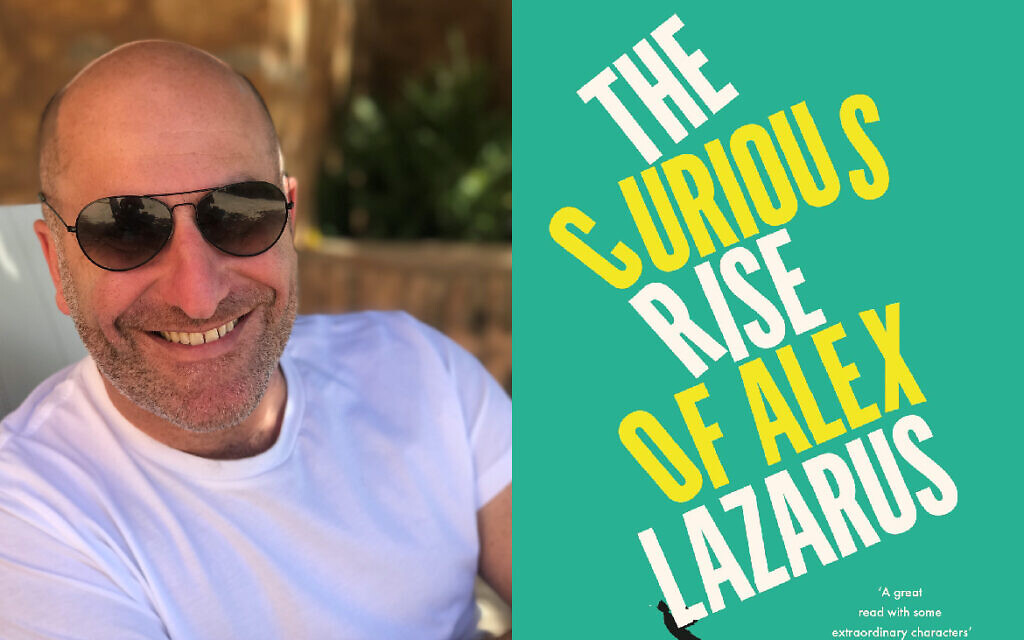 Adam Leigh gets all his best ideas in the bath, but when he is in the throes of writing, his head is filled full-time with ideas – be he in bath, bed or synagogue.

In The Curious Rise of Alex Lazarus, Leigh’s first novel, he has produced what Guardian journalist Jonathan Freedland has described as “a new genre: the fictional business memoir”.

His protagonist, Alex, whom the amiable Leigh insists is not an alter ego, meets a fellow parent in the park one day while their toddlers scrap in the sandpit.

And suddenly advertising exec Alex has a great idea – he and Julian, the other parent (who just happens to be a hotshot lawyer) should abandon their jobs and set up a parenting website. They do and all kind of mayhem ensues.

The first surprise, perhaps, is how Jewish the book is, but maybe it’s not surprising since Leigh is a former co-chair of Highgate Synagogue and
a trustee of World Jewish Relief.

There is an opening scene with an all-too believable rabbi addressing
the faithful on Rosh Hashanah, but it is fair to say he is offering a universal message.

At the core of the book is a discussion of ambition and what it means. That’s what he wanted to write, says Leigh, himself a former advertising honcho who now runs a successful executive search agency with his
wife, Hannah.

“I started to write about ambition and I began a cultural history. I wrote about 100 pages, but then I put it aside because I felt it read like a thesis,” he explains. Along with writing about ambition, his ambition was, in fact, to write a book.

In 1999, Leigh and his close friend, Maurice Helfgott, were watching their toddlers in the park and tossed around, semi-jokingly, the idea of
a parenting website.

They’d laughed about it over the years because neither of them did anything to put the plan into action, but it became Leigh’s lightbulb moment.

What if, he thought, his fictional protagonist Alex Lazarus actually managed to launch a successful
business – and the business was a fictional version of his and Helfgott’s long-standing joke?

“Initially, I became obsessed with writing a business plan, not least because I couldn’t really remember the ideas we’d had in 1999, other than something like, if you wanted to buy an obscure birthday present, how would you get it delivered.

“But I felt, for the purposes of the book, that the [fictional] business had to work and had to be credible.”

Accordingly, Leigh has written a “how-to” guide to launching a digital start-up as part of his very funny novel, with advice on seeking financing, putting in place the best computer brains and always having a stable financial officer who can oversee projects when the business founders may have lost sight of their original targets.

On several occasions, Alex and his partner Julian are obliged to go through humiliating “hazing” when asking for investment.

One couple makes them go through rounds of Trivial Pursuit, while a rather poisonous Israeli tech king, Moshe, is obnoxious to the two men, almost as an article of faith.

But this is drawn from life, as Leigh explains: the entrepreneur Saul Klein once told him he makes prospective pitchers write a notional Wikipedia entry for their proposed business.

“So, one of the first things I did was to write a Wikipedia entry for PrimaParent.com (his fictional company) to try to imagine the plot – and at the same time I did a huge amount of research about growing
a digital business.”

After 30 years in advertising, subsequent business ventures and having realised his ambition to write a novel, Leigh is now well into his second book.

Readers will be charmed to hear it is “a romantic comedy about a kosher butcher”, and no, he is not joking.

“It’s called Chicken Wars and it’s about the choices we make in life versus the duties and responsibilities we have. It’s about someone who always wanted to work in TV, whose family has a kosher chicken business.”

His hero has a nice life when we first meet him: he’s married, works in TV, and is happy.

“But then his father drops dead in the shop after a row with a customer and our man is forced to take over the business. Twenty years later, he is lonely and unhappy, divorced with a couple of recalcitrant children. He goes out on a blind date, all his creativity stifled, and meets a woman who owns a vegan cafe.

“He panics when she asks him what he does and says he works in TV.”